Frequency of HIV screening and testing 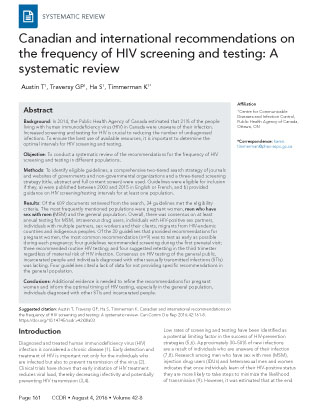 Canadian and international recommendations on the frequency of HIV screening and testing: A systematic review

Background: In 2014, the Public Health Agency of Canada estimated that 21% of the people living with HIV in Canada were unaware of their infection. Increased screening and testing for HIV is crucial to reducing the number of undiagnosed infections. To ensure the best use of available resources, it is important to determine the optimal intervals for HIV screening and testing.

Objective: To conduct a systematic review of the recommendations for the frequency of HIV screening and testing in different populations.

Methods: To identify eligible guidelines, a comprehensive two-tiered search strategy of journals and websites of governments and non-governmental organizations and a three-tiered screening strategy (title, abstract and full content screen) were used. Guidelines were eligible for inclusion if they, a) were published between 2000 and 2015 in English or French, and b) provided guidance on HIV screening/testing intervals for at least one population.

Results: Of the 609 documents retrieved from the search, 34 guidelines met the eligibility criteria. The most frequently mentioned populations were pregnant women, men who have sex with men (MSM) and the general population. Overall, there was consensus on at least annual testing for MSM, intravenous drug users, individuals with HIV-positive sex partners, individuals with multiple partners, sex workers and their clients, migrants from HIV-endemic countries and indigenous peoples. Of the 20 guidelines that provided recommendations for pregnant women, the most common recommendation (n=9) was to test as early as possible during each pregnancy; four guidelines recommended screening during the first prenatal visit; three recommended routine HIV testing; and four suggested retesting in the third trimester regardless of maternal risk of HIV infection. Consensus on HIV testing of the general public, incarcerated people and individuals diagnosed with other sexually transmitted infections (STIs) was lacking. Four guidelines cited a lack of data for not providing specific recommendations in the general population.

Conclusions: Additional evidence is needed to refine the recommendations for pregnant women and inform the optimal timing of HIV testing, especially in the general population, individuals diagnosed with other STIs and incarcerated people.

Diagnosed and treated human immunodeficiency virus (HIV) infection is considered a chronic diseaseFootnote 1. Early detection and treatment of HIV is important not only for the individuals who are infected but also to prevent transmission of the virusFootnote 2. Clinical trials have shown that early initiation of HIV treatment reduces viral load, thereby decreasing infectivity and potentially preventing HIV transmissionFootnote 3Footnote 4.

Low rates of screening and testing have been identified as a potential limiting factor in the success of HIV-prevention strategiesFootnote 5Footnote 6. Approximately 30-50% of new infections are a result of individuals who are unaware of their infectionFootnote 7Footnote 8. Research among men who have sex with men (MSM), injection drug users (IDUs) and heterosexual men and women indicates that once individuals learn of their HIV-positive status they are more likely to take steps to minimize the likelihood of transmissionFootnote 9. However, it was estimated that at the end of 2014, about 21% of people living with HIV in Canada were unaware of their infectionFootnote 10.

However, the benefits and frequency of HIV testing must be weighed against costs, and there is a lack of clarity as to the ideal frequency of testing in other populations.

The objective of this systematic review was to address the question: What are the recommended intervals for HIV screening and testing among various population groups in Canada and elsewhere?

A research librarian-designed comprehensive search of electronic databases identified guidelines published in peer-reviewed journals. Government and non-governmental organization (NGO) websites were also searched to identify any guidelines that may have been posted but not published in the scientific literature. The electronic databases searched included MEDLINE, Embase, Scopus, Cochrane Library and the Canadian Electronic Library (CEL). See Appendix 1 for a complete list of the government and NGO websites searched.

Inclusion and exclusion criteria are listed in Table 1. The search was restricted to guidelines published or posted within the last 15 years to capture the influence of new HIV prevention methods (e.g., treatment as prevention [TasP]).

We conducted a three-tiered screening process: title screen, abstract screen and full content screen. Three authors (TA, GT and SH) independently screened the titles. Titles with the terms "guideline," "strategy," "directive," "recommendation," "guidance" or "position" were included. Guidelines on HIV treatment or the management of opportunistic infections and co-infected populations were excluded. Two authors (TA, GT) independently screened the abstracts and excluded those that did not refer to HIV screening and testing. Disagreements between reviewers at either stage were resolved through discussion with a third reviewer (KT) and a fourth, if required. Two authors (TA, GT) then completed the full content screen. Guidelines that did not provide specific information on the recommended frequency or intervals of HIV screening and testing for any population group were excluded. Only primary source guidelines were included. Guidelines were considered duplicates if the same recommendation was published in multiple locations or if an article summarized or endorsed a guideline.

Data were extracted on the country of publication, population screened and testing frequency. Guidelines were categorized as Canadian, foreign, or international (spanning multiple countries, such as those from the World Health Organization). The population groups initially targeted in this review were the general population, MSM and IDU, but other population groups were also noted.

A total of 609 documents were retrieved from the search. After duplicates were removed and inclusion/exclusion criteria applied, the final review included 34 guidelines (Figure 1).

The characteristics of included guidelines are summarized in Table 2. Two-thirds (65%) came from the USA and Europe. In addition to the general population, MSM and IDU, several other key populations emerged: pregnant women, migrants from HIV-endemic regions, indigenous peoples, adolescents, incarcerated individuals, partners of unknown HIV status and others.

More recent guidelines have focused on routine testing (i.e., not recommending a specific testing interval but rather providing a recommendation to test everyone) with more frequent testing for individuals who engage in high-risk behavioursFootnote 2Footnote 16Footnote 17Footnote 18.

The most frequently mentioned populations were pregnant women, MSM and the general population. Of all 20 guidelines that provided recommendations for pregnant women, the most common recommendation (n=9) was to test as early as possible during each pregnancy; 4 guidelines recommended screening during the first prenatal visitFootnote 2Footnote 19Footnote 20Footnote 21; 3 recommended routine HIV testingFootnote 16Footnote 22Footnote 23; and 4 suggested retesting in the third trimester regardless of maternal risk of HIV infectionFootnote 13Footnote 17Footnote 24Footnote 25.

Testing at least annually was also the most common recommendation for IDU (11 of 13 guidelines), individuals with HIV-positive sex partners (6 of 7), individuals with multiple partners (4 of 7), sex workers and their clients (4 of 4), migrants from HIV-endemic countries (3 of 4) and indigenous peoples (2 of 3). Overall, the recommendations for frequency of testing higher-risk populations varied little.

Recommendations for the general population varied slightly. Some (2 of 14) focused on a specific time, whereas the majority (8 of 14) focused on routine or normalized testing without providing a specific interval (e.g., PHAC, European Union, Central African Republic). Four guidelines cited a lack of data as reason for not providing specific recommendations in the general population Footnote 16Footnote 28Footnote 29Footnote 30.

Guidelines for people diagnosed with STIs commonly recommend routine HIV testing (n=3) or re-testing with each new STI diagnosis (n=2). The emergence of this population in this review highlights STI diagnoses as a potential proxy for high-risk sexual behaviour and identifying individuals at higher risk for HIV infection.

This review identified 34 guidelines on the frequency of HIV testing. In addition to testing frequency recommendations for high-risk groups, several guidelines also included recommendations for the general population and pregnant women, highlighting a shift from risk-based and targeted-testingFootnote 13Footnote 24Footnote 33Footnote 46 to incorporating HIV testing into routine careFootnote 2Footnote 13Footnote 16Footnote 18Footnote 21Footnote 32Footnote 39. There was good consensus that testing at least annually is recommended in higher-risk populations.

Most guidelines suggest testing early in pregnancy, and some recommend testing again in the third trimester. There is a lack of consensus on some subgroups (i.e., incarcerated individuals, the general population and individuals diagnosed with other STIs), and there appears to be insufficient evidence to make recommendations for the general population and incarcerated people. Differences in the recommendations for population groups may be a result of the varying types of evidence used to inform the guidelines.

Several factors should be considered when interpreting these results. The strengths of this review include a thorough search strategy, and consistent, objective assessment and data extraction of the studies. There are also a number of limitations. Guidelines that may have been published in languages other than French and English were not included in this review. Of note, there were few published guidelines from Asia and Africa. Since these regions have high HIV incidence and prevalence rates, guidelines from these regions were either not captured by our search parameters or there is a lack of guidance on the optimal intervals for HIV screening and testing in these regions.

Research is needed to examine and critically appraise the evidence for the frequency of HIV testing recommendations in various populations. Specific research could be aimed at identifying the optimal testing interval for the general population, for adolescents, for transgender men and women and for incarcerated peopleFootnote 47Footnote 48 as well as the optimal frequency of testing for indigenous peoples, ethnocultural communities with high incidences of HIV and domestic migrant workers.

In summary, HIV screening and testing is an extremely important tool within the continuum of HIV care. Although many guidelines have been developed to identify the ideal frequency of testing for different populations, there are inconsistencies among them and the evidence base for some populations appear to be lacking. Additional evidence to inform the optimal frequency of HIV screening and testing in different populations could strengthen the global efforts to eradicate this disease.

We would like to thank Jun Wu and Margaret Gale-Rowe for their constructive feedback on the draft manuscript. We would also like to thank Ella Westhaver, the research librarian who helped us design and carry out our systematic guideline search, and Jessica Yau for her contributions to the revision of this manuscript.

This study was supported by the Public Health Agency of Canada. The authors have no additional sources of external funding to declare.

The website search was divided into national and international sites and government and non-governmental/stakeholder sites.

Scopus OECD ( TITLE ( hiv OR aids OR vih) AND ( TITLE-ABS-KEY ( ( hiv OR aids OR vih) W/6 ( testing OR screening) W/6 ( frequency OR interval* OR guidelin* OR recommendation*))) AND TITLE-ABS-KEY ( guidelin* OR recommendation*) PUBYEAR > 2000) AND ( TITLE-ABS-KEY ( spain OR slovakia OR poland OR portugal OR greece OR germany OR france OR finland OR denmark OR "Czech Republic" OR canad* OR belgium OR austria OR australia OR norway OR "New Zealand" OR netherlands OR mexico OR luxembourg OR korea OR japan OR italy OR iceland OR hungary OR ireland OR "United States" OR great-britain OR "United Kingdom" OR turkey OR switzerland OR sweden)) AND ( LIMIT-TO ( LANGUAGE, "English") OR LIMIT-TO ( LANGUAGE, "French")) 284

Public Health Agency of Canada. What is HIV/AIDS? Ottawa (ON); The Agency; 2008. http://www.phac-aspc.gc.ca/aids-sida/info/index-eng.php.

McNairy ML, El-Sadr WM. Antiretroviral therapy for the prevention of HIV transmission: what will it take? Clin Infect Dis 2014;58:1003-11.

Marks G, Crepaz N, Janssen RS. Estimating sexual transmission of HIV from persons aware and unaware that they are infected with the virus in the USA. AIDS 2006;20:1447-50.

AIDS.gov. Who is at Risk for HIV? Washington (DC): HHS; 2014. https://www.aids.gov/hiv-aids-basics/prevention/reduce-your-risk/who-is-at-risk-for-hiv/.

World Health Organization. Guidance on testing and counselling for HIV in settings attended by people who inject drugs: Improving access to treatment, care and prevention. Geneva (CH): WHO; 2009.

European Centre for Disease Prevention and Control. HIV and STI prevention among men who have sex with men. Stockholm (SE): ECDC; 2015.

National Institute for Health and Care Excellence. Increasing the uptake of HIV testing to reduce undiagnosed infection and prevent transmission among men who have sex with men. London (UK): NICE; 2011.