Canadian travellers and migrants from Brazil 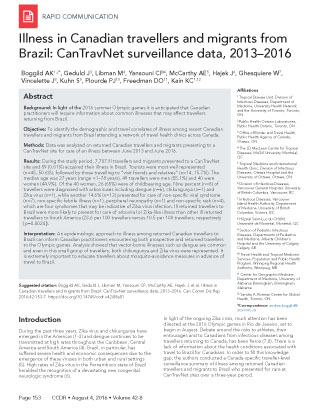 Background: In light of the 2016 summer Olympic games it is anticipated that Canadian practitioners will require information about common illnesses that may affect travellers returning from Brazil.

Objective: To identify the demographic and travel correlates of illness among recent Canadian travellers and migrants from Brazil attending a network of travel health clinics across Canada.

Methods: Data was analyzed on returned Canadian travellers and migrants presenting to a CanTravNet site for care of an illness between June 2013 and June 2016.

Interpretation: An epidemiologic approach to illness among returned Canadian travellers to Brazil can inform Canadian practitioners encountering both prospective and returned travellers to the Olympic games. Analysis showed that vector-borne illnesses such as dengue are common and even in this small group of travellers, both chikungunya and Zika virus were represented. It is extremely important to educate travellers about mosquito-avoidance measures in advance of travel to Brazil.

During the past three years, Zika virus and chikungunya have emerged in the AmericasFootnote 1Footnote 2Footnote 3 and dengue continues to be transmitted at high rates throughout the Caribbean, Central America and South AmericaFootnote 4. Brazil, in particular, has suffered severe health and economic consequences due to the emergence of these viruses in both urban and rural settingsFootnote 5. High rates of Zika virus in the Pernambuco state of Brazil heralded the recognition of a devastating new congenital neurologic syndromeFootnote 6.

In light of the ongoing Zika crisis, much attention has been directed at the 2016 Olympic games in Rio de Janeiro, set to begin in August. Debate around the risks to athletes, their entourages and to Canadians from infectious diseases among travellers returning to Canada, has been fierceFootnote 7Footnote 8. There is a lack of information about the health conditions associated with travel to Brazil for Canadians. In order to fill this knowledge gap, the authors conducted a Canada-specific traveller-level surveillance summary of illness among returned Canadian travellers and migrants to Brazil who presented for care at CanTravNet sites over a three-year period.

Data source: Seven Canadian sites that practice post-travel medicine in large urban centres from five provinces (British Columbia, Alberta, Manitoba, Ontario and Quebec), belong to the GeoSentinel Global Surveillance Network and constitute a national surveillance group called CanTravNetFootnote 9. Demographic and travel-related data were collected using the data platform of the GeoSentinel Surveillance NetworkFootnote 10. The GeoSentinel data-collection protocol is reviewed cyclically by the institutional review board (IRB) officer at the National Center for Emerging and Zoonotic Infectious Diseases at the US Centers for Disease Control and Prevention and is classified as public health surveillance, not human-subjects research requiring submission to and approval from IRBs. Final diagnoses include specific etiologies (e.g., Zika virus) and syndromes (e.g., rash). All CanTravNet sites contribute microbiologically-confirmed data where available, based on the best available reference diagnostics.

Inclusion criteria: Demographic, clinical and travel-related data on Canadians encountered after completion of their travel to Brazil and seen in any of six CanTravNet sites from June 1, 2013 to June 1, 2016 were extracted and analyzed. Only patients with probable or confirmed final diagnoses were included.

Analysis: Extracted data were managed in a Microsoft Access database. Travellers were organized by purpose of travel, demographics and travel metrics including pre-travel encounter and diagnoses. Women of childbearing age were defined as those between 15 and 49 years of age. Differences between groups of travellers were compared using Fisher's exact test. All statistical computations were performed using GraphPad Prism software (GraphPad Software Inc., La Jolla, CA).

Febrile conditions including arboviral infections occurred in nine percent (n=8) of travellers, who were diagnosed with either dengue (n=6), chikungunya (n=1), or Zika virus (n=1). All eight travellers (100%) with chikunguyna, dengue or Zika had itineraries entailing travel to Brazil during the months of January to June, while only two of these eight travellers (25%) travelled to Brazil during the months of July to December (Figure 1). Non-specific viral syndrome (n=7), non-specific rash (n=4), non-specific febrile syndrome (n=1) and peripheral neuropathy (n=1), four syndromes possibly indicative of Zika virus infection, were also well represented (Table 1).

This analysis of surveillance data elucidates travel and demographic details for a subset of ill returned Canadian travellers and migrants who acquired their disease in Brazil this can inform Canadian practitioners encountering prospective and returned travellers to the 2016 Olympic games. These data highlight the recent and ongoing emergence of arboviral infections such as dengue, chikungunya and Zika in travellers to the Americas and the high rate of arthropod bite acquisition in travellers to Brazil.

Vector-borne diseases, including dengue, chikungunya and Zika, were well represented among this group of ill travellers to Brazil and such illnesses appeared to have been associated predominantly with travel during the months of January to June, rather than the latter of half of the year during which time the Olympic games will be held. Compared to ill returned travellers and migrants to other countries of South America, those who travelled to Brazil were two- to three-times more likely to acquire arboviral or Zika-like illness. Due to a lack of vaccine availability or chemoprophylaxis at this time, prevention of arboviruses such as dengue, chikungunya and Zika rests on the use of mosquito avoidances measures such as screened accommodations, insecticide-treated clothing and DEET- or picaridin-based insect repellantsFootnote 12Footnote 13. Sexual transmission of Zika virus can be reduced through use of condoms and abstinenceFootnote 6Footnote 14.

Phylogenetic studies have convincingly dated the introduction of Zika virus to Brazil in 2013Footnote 15, however, specific Zika virus diagnostic testing has only recently become availableFootnote 14. A full 15% of ill travellers to Brazil in this analysis received a diagnosis that could signal the presence of Zika virus, including non-specific viral or febrile syndrome, non-specific rash and peripheral neuropathy. Those presenting early in the study period prior to recognition of Zika transmission in the Americas would not have been tested for Zika virus. In addition, due to the prolonged turnaround time for Zika testingFootnote 14, many of those travellers with a recent Zika-like diagnosis may receive confirmatory Zika test results in the future. Of more concern is the finding of a Zika-like syndrome in almost one-quarter of women of childbearing age. Given the frequency and severity of the newly recognized congenital Zika syndromeFootnote 6Footnote 14, women who are pregnant are advised to avoid travel to the OlympicsFootnote 14Footnote 16 and those planning to conceive should consider deferring travelFootnote 14.

Analysis of CanTravNet data has several limitationsFootnote 9. This analysis pertains only to the sample of ill returned travellers who presented to a CanTravNet site following travel to Brazil, thus, our conclusions may lack generalizability to other Canadian travellers and to those visiting other countries. The appearance of over-representation of arboviral and Zika-like illness among women of childbearing age may simply reflect referral bias following the emergence of Zika in the Americas. Our database may under-represent those who acquired short-duration illnesses on long-duration travel as these individuals may have convalesced while abroad and did not seek care upon return. Our data cannot estimate incidence rates or destination-specific numerical risks for particular diagnosesFootnote 17. As the Winnipeg site was new to CanTravNet in 2016, returning travellers to Manitoba are not represented. Data on pre-travel medical consultation was missing for 31.5% of ill returned travellers. Finally, due to the nature of our network, pediatric cases are under-represented, thus, our data may not be generalizable to the travelling pediatric population in Canada.

CanTravNet is the Public Health Agency of Canada's corresponding network for tropical and travel medicine that has been funded through the Office of Border and Travel Health Division of PHAC. It has been created by grouping the Canadian sites of GeoSentinel: The Global Surveillance Network of the International Society of Travel Medicine (ISTM) which is supported by Cooperative Agreement U50/CCU412347 from the Centers for Disease Control and Prevention and the ISTM. The funding source of GeoSentinel had no role in study design, data analysis, data interpretation or drafting the manuscript. The funding source of CanTravNet contributed to study design and critical appraisal of the manuscript, but did not have access to raw data.

Rodriguez-Morales AJ, Villamil-Gómez WE, Franco-Paredes C. The arboviral burden of disease caused by co-circulation and co-infection of dengue, chikungunya and Zika in the Americas. Travel Med Infect Dis 2016;14(3):177-9.

Zika Working Group on behalf of the Committee to Advise on Tropical Medicine and Travel (CATMAT). Canadian recommendations on the prevention and treatment of Zika virus: Update. Can Comm Dis Rep 2016;42:101-11. http://www.phac-aspc.gc.ca/publicat/ccdr-rmtc/16vol42/dr-rm42-5/ar-01-eng.php