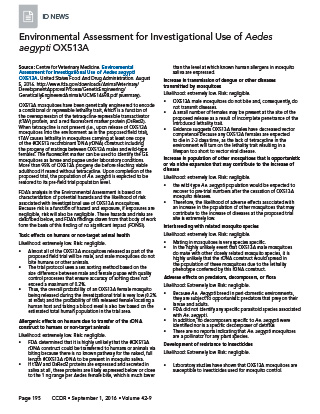 Environmental Assessment for Investigational Use of Aedes aegypti OX513A

OX513A mosquitoes have been genetically engineered to encode a conditional or repressible lethality trait, which is a function of the overexpression of the tetracycline-repressible transactivator (tTAV) protein, and a red fluorescent marker protein (DsRed2). When tetracycline is not present (i.e., upon release of OX513A mosquitoes into the environment as in the proposed field trial), tTAV causes lethality in mosquitoes carrying at least one copy of the #OX513 recombinant DNA (rDNA) construct including the progeny of matings between OX513A males and wild-type females. The fluorescent marker can be used to identify the GE mosquitoes as larvae and pupae under laboratory conditions. More than 95% of OX513A progeny die before reaching viable adulthood if reared without tetracycline. Upon completion of the proposed trial, the population of Ae. aegypti is expected to be restored to its pre-field trial population level.

FDA's analysis in the Environmental Assessment is based on characterization of potential hazards and the likelihood of risk associated with investigational use of OX513A mosquitoes. Because risk is a function of hazard and exposure, if exposures are negligible, risk will also be negligible. These hazards and risks are described below, and FDA's findings drawn from that body of work form the basis of this finding of no significant impact (FONSI).

Increase in transmission of dengue or other diseases transmitted by mosquitoes

Development of resistance to insecticides

Importance: Influenza immunization of women during pregnancy protects the young infants against influenza illness. The duration of this protection remains unclear.

Objective: To evaluate the duration of infant protection conferred by maternal immunization and its association with transplacental antibody transfer.

Design, Setting, and Participants: Infants born to women who participated in a randomized, double-blind, placebo-controlled clinical trial in 2011 and 2012 on the safety, immunogenicity, and efficacy of trivalent inactivated influenza vaccine (IIV3) during pregnancy were followed up during the first 6 months of life for polymerase chain reaction (PCR)-confirmed influenza illness. In a secondary analysis of a subset of infants, hemagglutination inhibition (HAI) antibodies were measured. The study was performed at a single center in South Africa. The secondary analysis was performed in October 2014.

Main Outcomes and Measures: The vaccine's efficacy against PCR-confirmed influenza illness and the percentage of infants with HAI titers of 1:40 or more by age group.

Conclusions and Relevance: Maternal immunization conferred protection against infection in the infants for a limited period during early life. The lack of protection beyond 8 weeks of age correlated with a decrease in maternally derived antibodies.