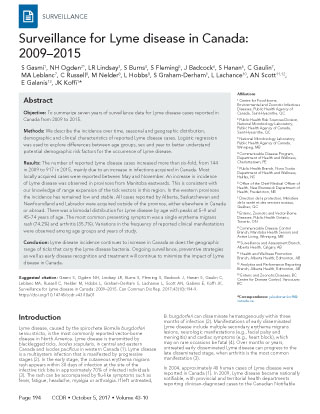 Objective: To summarize seven years of surveillance data for Lyme disease cases reported in Canada from 2009 to 2015.

Methods: We describe the incidence over time, seasonal and geographic distribution, demographic and clinical characteristics of reported Lyme disease cases. Logistic regression was used to explore differences between age groups, sex and year to better understand potential demographic risk factors for the occurrence of Lyme disease.

Results: The number of reported Lyme disease cases increased more than six-fold, from 144 in 2009 to 917 in 2015, mainly due to an increase in infections acquired in Canada. Most locally acquired cases were reported between May and November. An increase in incidence of Lyme disease was observed in provinces from Manitoba eastwards. This is consistent with our knowledge of range expansion of the tick vectors in this region. In the western provinces the incidence has remained low and stable. All cases reported by Alberta, Saskatchewan and Newfoundland and Labrador were acquired outside of the province, either elsewhere in Canada or abroad. There was a bimodal distribution for Lyme disease by age with peaks at 5–9 and 45–74 years of age. The most common presenting symptom was a single erythema migrans rash (74.2%) and arthritis (35.7%). Variations in the frequency of reported clinical manifestations were observed among age groups and years of study.

Conclusion: Lyme disease incidence continues to increase in Canada as does the geographic range of ticks that carry the Lyme disease bacteria. Ongoing surveillance, preventive strategies as well as early disease recognition and treatment will continue to minimize the impact of Lyme disease in Canada.

Lyme disease, caused by the spirochete Borrelia burgdorferi sensu stricto, is the most commonly reported vector-borne disease in North America. Lyme disease is transmitted by blacklegged ticks, Ixodes scapularis, in central and eastern Canada and Ixodes pacificus in western CanadaFootnote 1 . Lyme disease is a multisystem infection that is manifested by progressive stagesFootnote 2 . In the early stage, the cutaneous erythema migrans rash appears within 30 days of infection at the site of the infective tick bite in approximately 70% of infected individualsFootnote 3 . The rash can be accompanied by flu-like symptoms such as fever, fatigue, headache, myalgia or arthralgia. If left untreated, B. burgdorferi can disseminate hematogenously within three months of infectionFootnote 2 . Manifestations of early disseminated Lyme disease include multiple secondary erythema migrans lesions, neurologic manifestations (e.g., facial palsy and meningitis) and cardiac symptoms (e.g., heart block), which may on rare occasions be fatalFootnote 4 . Over months or years, untreated early disseminated Lyme disease can progress to the late disseminated stage, when arthritis is the most common manifestationFootnote 3 .

In 2004, approximately 40 human cases of Lyme disease were reported in CanadaFootnote 1 . In 2009, Lyme disease became nationally notifiable, with provincial and territorial health departments reporting clinician-diagnosed cases to the Canadian Notifiable Disease Surveillance System (CNDSS) of the Public Health Agency of Canada (PHAC)Footnote 5 . In 2010, the Lyme Disease Enhanced Surveillance (LDES) system, designed by a working group of the Pan-Canadian Public Health Network, was implemented. This system aims to improve identification of Canadians at risk by analyzing information beyond that normally transferred to the CNDSSFootnote 6 . This study aligns with the three pillars of the Federal Framework on Lyme Disease, one of which aims for “the establishment of a national medical surveillance program to use data collected by Public Health Agency of Canada to properly track incidence rates and the associated economic costs of Lyme disease”Footnote 7 .

The 2009 national Lyme disease case definition during the study periodFootnote 8  is shown in Table 1.

Information on reported Lyme disease cases from 2009 to 2015 was obtained from the CNDSS and LDES system. The CNDSS collects only demographic data (age and sex), episode date and case classification. The LDES system captures additional data, including:

By 2015, eight provinces were participating in the LDES system: British Columbia, Alberta, Manitoba, Ontario, New Brunswick, Nova Scotia, Prince Edward Island and Newfoundland and Labrador. British Columbia did not provide data on location. Quebec and Saskatchewan provided data only through the CNDSS.

Incidence of reported Lyme disease cases in Canada was calculated by year, province, age group and sex per 100,000 population. The denominators were census population estimates for July 1 of each year of the study period (2009–2015) based on Statistics Canada dataFootnote 9 .

The seasonal occurrence of cases (by month) was obtained from the reported month of onset for Lyme disease signs or symptoms in the LDES system. The most likely geographic location for acquisition of Lyme disease infection was the centroid of the census subdivision (CSD) or the municipality in which the patient was exposed to Lyme disease risk. Any cases for which there was a history of travel (within or outside of Canada) within 30 days of reporting were not included in geographic analyses. Geographic analysis of cases acquired in BC was not possible as the location of acquisition was not reported to PHAC.

For each model, explanatory variables were age group, sex and year. For the variable “age group,” two age intervals, 10 years and 15 years, were explored in each model, and the reference group were 0–9 years and 0–14 years, respectively. The variable “province” was included in the analysis to account for possible variability in reporting between provinces. The significance level for explanatory variables retained in the multivariable model was less than 0.1. The most parsimonious multivariate models were sought by backward elimination of nonsignificant variables until all factors in the model were significant (P<0.05).

The increased incidence of Lyme disease in Canada was mainly due to an increase in the number of locally acquired infections—79 in 2009 and 667 in 2015.

For the provinces participating in the LDES system, the month of illness onset for Lyme disease cases acquired in Canada was available for 2010 cases. Of these, 96% were reported between May and November, with a consistent peak in case numbers in July. Most cases were reported during the summer months of June (20.7%), July (35.4%) and August (17.3%) (Figure 1). In 2015, a greater number of cases were reported with illness onset in November and December, suggesting that the ticks may have been active later in the season that year than in other years.

For the provinces participating in the LDES system, the number of municipalities with acquisition of Lyme disease cases in Canada increased more than five-fold over the study period, from 21 in 2009 to 109 in 2015 (Table 4).

The reported locations of where Lyme disease was acquired in Canada are shown in Figure 2. Lyme disease risk areas have increased over time for Manitoba, Ontario, Quebec, New Brunswick and Nova ScotiaFootnote 1.

Clinical information on those affected by Lyme disease acquired in Canada was available in 1,657 (55%) of reported cases. A single erythema migrans rash (74.2%) and arthritis (35.7%) were the most common manifestations, and multiple erythema migrans lesions (5.9%) and cardiac symptoms (3.6%) were the least common (Figure 4). Multiple clinical manifestations were reported in 33.2% of cases.

Since Lyme disease became nationally notifiable in Canada in 2009, the number of reported Lyme disease cases has continued to increase from 0.4 to 2.6 per 100,000 population. Over the seven-year period, most of the cases were reported from three provinces, Ontario, Quebec and Nova Scotia; and most were locally acquired. The increase in geographic distribution of Lyme disease cases is consistent with the ongoing range expansion of blacklegged ticks, which is likely associated in part with effects of a warming climate on range spread of the tick vector I. scapularis in eastern and central CanadaFootnote 10 . However the incidence remains low and stable in western provinces of British Columbia, Alberta and Saskatchewan. This is due to the fact that in BC, fewer western blacklegged ticks, the Lyme disease vector in this area, are being infected with the Lyme disease bacterium than blacklegged ticks found in central and eastern Canada. In Alberta and Saskatchewan despite an increased effort, no known black-legged tick populations have been detected.

Reported illness onset was greater during the summer months which corresponds with the activity period of I. scapularis ticks seeking hostsFootnote 11  and overlaps with the period when most Canadians engage in outdoor activities.

Among adults, the highest incidence was between 55–74 years. Among children, the highest incidence was between 5–9 years. This is consistent with demographic trends seen in the United StatesFootnote 3 Footnote 6  and may be useful when targeting awareness messagingFootnote 12 Footnote 13 . Fewer late disseminated Lyme disease cases were reported in 2015 compared with the years from 2009 to 2011, which could suggest increased awareness and earlier diagnosis and reporting of Lyme disease cases over time.

This study summarizes data from the Canadian Notifiable Diseases Surveillance System, supplemented in most provinces with information from the Lyme Disease Enhanced Surveillance system. Using these data, we are able to follow spatial and temporal trends in the evolution of Lyme disease incidence in Canada and observe the geographic spread of Lyme disease risk and effectiveness of public health actions.

There are three main limitations to the interpretation of these findings. First, it is likely that the incidences over time are conservative estimates as some Lyme disease cases may be undiagnosed and probable cases may be underreported. Second, information on whether the Lyme disease infection was locally acquired or travel-related is an estimate because not all provinces provided this data. Finally, because of limited resources, field tick surveillance to detect expanding Lyme disease risk areas may not be up to date in many locations, which would affect classification of cases.

The number of reported Lyme disease cases has continued to increase in Canada over recent years, as is the geographic range of ticks that carry the Lyme disease bacteria. Continued surveillance, preventive strategies as well as early disease recognition and treatment will continue to minimize the impact of Lyme disease in Canada.

The authors thank all the provincial and regional public health workers who collect and report data to the CNDSS, and Yann Pelcat of the Public Health Agency of Canada for preparing Figure 5.

This study was supported by the Public Health Agency of Canada and all the provincial public health organizations that contributed to the data.