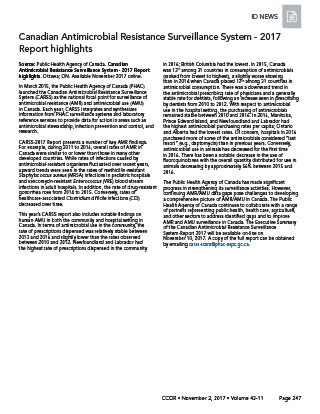 Download this article as a PDF (58 KB - 1 pages)
Published by: The Public Health Agency of Canada
Issue: Volume 43-11: Antimicrobial resistance and One Health
Date published: November 2, 2017
ISSN: 1481-8531
Subscribe to CCDR

In March 2015, the Public Health Agency of Canada (PHAC) launched the Canadian Antimicrobial Resistance Surveillance System (CARSS) as the national focal point for surveillance of antimicrobial resistance (AMR) and antimicrobial use (AMU) in Canada. Each year, CARSS integrates and synthesizes information from PHAC surveillance systems and laboratory reference services to provide data for action in areas such as antimicrobial stewardship, infection prevention and control, and research.

CARSS-2017 Report presents a number of key AMR findings. For example, during 2011 to 2016, overall rates of AMR in Canada were similar to or lower than those in many other developed countries. While rates of infections caused by antimicrobial-resistant organisms fluctuated over recent years, upward trends were seen in the rates of methicillin-resistant Staphylococcus aureus (MRSA) infections in pediatric hospitals and vancomycin-resistant Enterococcus (VRE) blood stream infections in adult hospitals. In addition, the rate of drug-resistant gonorrhea rose from 2014 to 2015. Conversely, rates of healthcare-associated Clostridium difficile infections (CDI) decreased over time.

This year’s CARSS report also includes notable findings on human AMU in both the community and hospital setting in Canada. In terms of antimicrobial use in the community, the rate of prescriptions dispensed was relatively stable between 2013 and 2016 and slightly lower than the rates observed between 2010 and 2012. Newfoundland and Labrador had the highest rate of prescriptions dispensed in the community in 2016; British Columbia had the lowest. In 2015, Canada was 13th among 31 countries in consumption of antimicrobials (ranked from lowest to highest), a slightly worse showing than in 2014 when Canada placed 12th among 31 countries in antimicrobial consumption. There was a downward trend in the antimicrobial prescribing rate of physicians and a generally stable rate for dentists, following an increase seen in prescribing by dentists from 2010 to 2012. With respect to antimicrobial use in the hospital setting, the purchasing of antimicrobials remained stable between 2010 and 2016. In 2016, Manitoba, Prince Edward Island, and Newfoundland and Labrador had the highest antimicrobial purchasing rates per capita; Ontario and Alberta had the lowest rates. Of concern, hospitals in 2016 purchased more of some of the antimicrobials considered “last resort” (e.g., daptomycin) than in previous years. Conversely, antimicrobial use in animals has decreased for the first time in 2016. There has been a notable decrease in the use of fluoroquinolones with the overall quantity distributed for use in animals decreasing by approximately 56% between 2015 and 2016.

The Public Health Agency of Canada has made significant progress in strengthening its surveillance activities. However, continuing AMR/AMU data gaps pose challenges to developing a comprehensive picture of AMR/AMU in Canada. The Public Health Agency of Canada continues to collaborate with a range of partners representing public health, health care, agriculture, and other sectors to address identified gaps and to improve AMR and AMU surveillance in Canada. The Executive Summary of the Canadian Antimicrobial Resistance Surveillance System-Report 2017 will be available on-line on November 10, 2017. A copy of the full report can be obtained by emailing carss-scsra@phac-aspc.gc.ca.