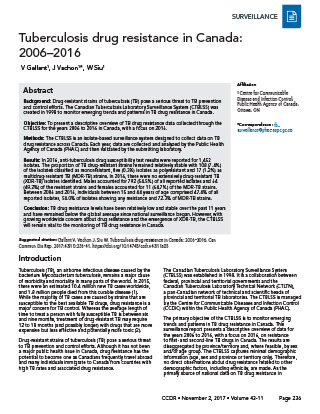 Objective: To present a descriptive overview of TB drug resistance data collected through the CTBLSS for the years 2006 to 2016 in Canada, with a focus on 2016.

Methods: The CTBLSS is an isolate-based surveillance system designed to collect data on TB drug resistance across Canada. Each year, data are collected and analyzed by the Public Health Agency of Canada (PHAC) and then validated by the submitting laboratory.

Results: In 2016, anti-tuberculosis drug susceptibility test results were reported for 1,452 isolates. The proportion of TB drug-resistant strains remained relatively stable with 108 (7.4%) of the isolates classified as monoresistant, five (0.3%) isolates as polyresistant and 17 (1.2%) as multidrug-resistant TB (MDR-TB) strains. In 2016, there were no extensively drug-resistant TB (XDR-TB) isolates identified. Males accounted for 792 (54.5%) of all reported isolates and 64 (49.2%) of the resistant strains and females accounted for 11 (64.7%) of the MDR-TB strains. Between 2006 and 2016, individuals between 15 and 44 years of age comprised 47.4% of all reported isolates, 54.0% of isolates showing any resistance and 72.3% of MDR-TB strains.

Conclusion: TB drug resistance levels have been relatively low and stable over the past 11 years and have remained below the global average since national surveillance began. However, with growing worldwide concern about drug resistance and the emergence of XDR-TB, the CTBLSS will remain vital to the monitoring of TB drug resistance in Canada.

Tuberculosis (TB), an airborne infectious disease caused by the bacterium Mycobacterium tuberculosis, remains a major cause of morbidity and mortality in many parts of the world. In 2015, there were an estimated 10.4 million new TB cases worldwide, and 1.8 million people died from this curable diseaseFootnote 1. While the majority of TB cases are caused by strains that are susceptible to the best available TB drugs, drug resistance is a major concern for TB control. Whereas the average length of time to treat a person with fully susceptible TB is between six and nine months, treatment of drug-resistant TB may require 12 to 18 months (and possibly longer) with drugs that are more expensive but less effective and potentially more toxicFootnote 2.

Drug-resistant strains of tuberculosis (TB) pose a serious threat to TB prevention and control efforts. Although it has not been a major public health issue in Canada, drug resistance has the potential to become one as Canadians frequently travel abroad and many individuals immigrate to Canada from countries with high TB rates and associated drug resistance.

The Canadian Tuberculosis Laboratory Surveillance System (CTBLSS) was established in 1998. It is a collaboration between federal, provincial and territorial governments and the Canadian Tuberculosis Laboratory Technical Network (CTLTN), a pan-Canadian network of technical and scientific heads of provincial and territorial TB laboratories. The CTBLSS is managed by the Centre for Communicable Diseases and Infection Control (CCDIC) within the Public Health Agency of Canada (PHAC).

The primary objective of the CTBLSS is to monitor emerging trends and patterns in TB drug resistance in Canada. This surveillance report presents a descriptive overview of data for the years 2006 to 2016, with a focus on 2016, on resistance to first- and second-line TB drugs in Canada. The results are disaggregated by province/territory and, where feasible, by sex and/or age group. The CTBLSS captures minimal demographic information (age, sex and province or territory only). Therefore, no direct observations about drug resistance related to other demographic factors, including ethnicity, are made. As the primary source of national data on TB drug resistance in Canada, the data presented here are intended to inform public health action as well as policy and program development and assessment.

Previously, these data were published annually in a stand-alone report entitled Tuberculosis: Drug Resistance in Canada. This is the first iteration of the report to be published in the Canada Communicable Disease Report (CCDR). The data presented in this report are the most up-to-date at the time of publication and replace those previously published. Supplementary data tables are available onlineFootnote 3.

The CTBLSS is an isolate-based surveillance system designed to collect data on TB drug resistance across Canada. TB drug resistance is identified through susceptibility testing of biological specimens (isolates) collected from individuals with culture-positive TBFootnote 2. Details on the CTBLSS methods of data collection, data management and other laboratory processes have been previously describedFootnote 4. As well, a list of recommended first- and second-line anti-tuberculosis drugs and the recommended critical concentrations to be used for routine testing are presentedFootnote 4.

Standardized data recoding procedures were applied to all data to create a national dataset. All raw data (paper forms and electronic datasets) were retained in compliance with PHAC's directive for the collection, use and dissemination of information relating to public health.

No statistical procedures were used for comparative analyses, nor were any statistical techniques applied to account for missing data. Data in tables with small cell sizes (n=<5) were not suppressed, since disclosure was not deemed to pose any risk of identifying individual cases. These procedures were in line with the directive for the collection, use and dissemination of information relating to public health. The data presented in this report were extracted from the CTBLSS database on March 2017 and have been validated by the reporting laboratories. Microsoft Excel 2010 and SAS Enterprise Guide (SAS EG) v5.1 software were used for data cleaning and analysis.

In 2016, anti-tuberculosis DST results for 1,463 isolates were reported to PHAC. Of these, 11 (0.8%) isolates were identified as M. bovis Bacillus Calmette–Guerin and were excluded from further analyses. Of the remaining 1,452 isolates analyzed, 843 (58.1%) were reported as MTBC where the species were known (830 were M. tuberculosis, nine were M. africanum and four were M. bovis) and 609 (41.9%) were MTBC of an unknown species (data not shown) (Supplementary Table 1).

For the period 2006 to 2016, DST results were reported for 14,872 isolates (Supplementary Table 1). Monoresistance was the most frequent pattern reported, representing approximately 1,167 (7.8%) of all the isolates tested over the period. In total, 173 (1.2%) of the isolates were identified as MDR-TB (excluding XDR-TB) and seven (<0.1%) of the isolates were identified as XDR-TB. While there have been small fluctuations in the proportion of isolates showing various resistance patterns, the results have remained consistent during the 11-year period from 2006 to 2016 (Figure 2; Supplementary Table 2).

In 2016, 1,314 (90.4%) of the isolates originated from five provinces: Ontario, Quebec, British Columbia, Alberta and Manitoba (Figure 6; Supplementary Table 16). Saskatchewan accounted for fewer than 5% of reported isolates while the northern territories (Northwest Territories, Nunavut and Yukon) and the Atlantic provinces (New Brunswick, Newfoundland and Labrador, Nova Scotia and Prince Edward Island) together accounted for 5% of the reported isolates. In 2016, all isolates reported from Nunavut, the Northwest Territories, Yukon, Newfoundland and Labrador, New Brunswick and Prince Edward Island were susceptible to all first-line drugs tested. Of the 17 MDR-TB isolates, seven (41.2%) originated from Ontario, four (23.5%) from Alberta and two (11.8%) each from British Columbia, Quebec and Manitoba.

Between 2006 and 2016, there were seven XDR-TB isolates reported. Of the seven, five originated from Ontario, one from Manitoba and one from Quebec (Supplementary Table 18).

In Canada, between 2006 and 2016, trends in TB drug resistance remained relatively low and stable. In 2016, although there was a slight increase in the number of isolates reported as compared with previous years, this did not translate into an increased proportion of drug resistance. Of the results submitted in 2016, 9.0% of all isolates tested were resistant to at least one of the four first-line drugs; the majority (83.1%) of those were resistant to only one drug. Of isolates tested, MDR-TB was identified in only 1.2% and XDR-TB was not identified among any results reported in 2016.

Isoniazid monoresistance was the most commonly reported pattern in Canada. Rifampin, along with isoniazid, is one of the most effective first-line medications; fortunately, rifampin monoresistance remains low but ongoing surveillance will continue to be important to identify any changes in resistance patterns to this drug.

In many parts of the world, drug resistance is a major challenge to preventing and controlling TB. Eastern Europe and Central Asia continue to have the world's highest proportion of MDR-TB casesFootnote 1. Such cases pose a considerable challenge to treatment and prevention efforts because the availability of effective anti-tuberculosis drugs becomes limited.

As reported in Tuberculosis in Canada - Summary 2015, foreign-born individuals continued to account for the majority of reported cases, at 71% of active TB cases diagnosed in CanadaFootnote 6 and it is likely that these individuals acquired the infection outside of Canada. Therefore, although data on country of origin is not collected in the CTBLSS, TB drug-resistance patterns in Canada are probably affected by drug-resistance patterns elsewhere in the world.

Data published by the World Health Organization show that, globally, in 2015, about 3.9% (95% CI: 2.7%–5.1%) of new TB cases and 21% (95% CI: 15%–28%) of previously-treated TB cases were MDR-TBFootnote 1. Although the data captured through the CTBLSS do not distinguish between isolates from new versus previously-treated cases of TB, it is reassuring that only 1.2% of isolates tested in 2016 were MDR-TB (which is considerably lower than global estimates). In addition, only seven XDR-TB cases were identified between 2006 and 2016 indicating that XDR-TB in Canada remains rare.

A few limitations should be considered. Although efforts were made to ensure that multiple records for any one individual in a given year were removed, given the minimal identifying information available for each isolate (age and sex), it is possible that multiple isolates from one individual were included in the database. This bias is likely minimal given the validation process with provincial and territorial data providers.

Demographic and clinical data collected through the CTBLSS were limited, and no data were collected on the ethnic origin, diagnostic/clinical status or treatment outcome of the individual from whom the sample was collected. Additional demographic and clinical information would facilitate a more in-depth epidemiological assessment of drug resistance patterns in Canada. Differentiation between primary and acquired drug resistanceFootnote 1 and differing resistance patterns among new cases in comparison to re-treatment cases was not possible based on data collected through this surveillance system. However, the Tuberculosis in Canada—Summary 2015Footnote 6 and Tuberculosis in Canada 2012Footnote 7 surveillance reports provide an overview of the overall reported active TB cases and corresponding incidence rates in Canada by select demographic and clinical characteristics, and present case-based (vs. isolate-based) data on primary and acquired drug resistance in Canada that were not presented here. Together, these reports provide a comprehensive overview of TB case and drug resistance surveillance data from a national perspective.

Typically, only MDR-TB isolates or other extensive resistance patterns will undergo select second-line drug sensitivity testing. Although the Clinical and Laboratory Standards Institute (CLSI) recommends that isoniazid-monoresistant isolates as well as other polyresistant non-MDR isolates be tested for second-line drug resistanceFootnote 8 this is not universally reported in Canada. Other isolates that are not MDR-TB may be resistant to fluoroquinolones because of the widespread use of these antibiotics for other respiratory infections. To some extent, this limits our understanding of the emergence of second-line drug resistance within Canada.

The Public Health Agency of Canada continues to work with its provincial and territorial partners to achieve the goal of TB elimination in Canada. With the growing worldwide concern about drug resistance and the emergence of XDR-TB, the CTBLSS remains vital to the monitoring of TB drug resistance in Canada.