HIV screening and testing in Canada—Part 1 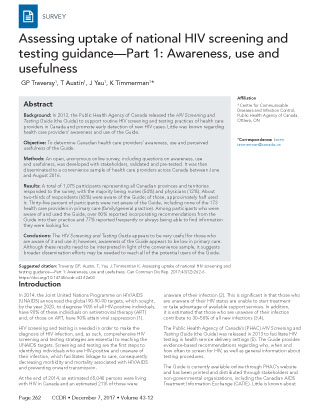 Assessing uptake of national HIV screening and testing
guidance—Part 1: Awareness, use and usefulness

Objective: To determine Canadian health care providers' awareness, use and perceived usefulness of the Guide.

Methods: An open, anonymous online survey, including questions on awareness, use and usefulness, was developed with stakeholders, validated and pre-tested. It was then disseminated to a convenience sample of health care providers across Canada between June and August 2016.

Results: A total of 1,075 participants representing all Canadian provinces and territories responded to the survey, with the majority being nurses (54%) and physicians (12%). About two-thirds of respondents (65%) were aware of the Guide; of those, approximately half used it. Thirty-five percent of participants were not aware of the Guide, including none of the 173 health care providers in primary care (family/general practice). Among participants who were aware of and used the Guide, over 80% reported incorporating recommendations from the Guide into their practice and 77% reported frequently or always being able to find information they were looking for.

Conclusions: The HIV Screening and Testing Guide appears to be very useful for those who are aware of it and use it; however, awareness of the Guide appears to be low in primary care. Although these results need to be interpreted in light of the convenience sample, it suggests broader dissemination efforts may be needed to reach all of the potential users of the Guide.

In 2014, the Joint United Nations Programme on HIV/AIDS (UNAIDS) announced the global 90-90-90 targets, which sought, by the year 2020, to diagnose 90% of all HIV-positive individuals, have 90% of these individuals on antiretroviral therapy (ART) and, of those on ART, have 90% attain viral suppressionFootnote 1.

The Public Health Agency of Canada's (PHAC) HIV Screening and Testing Guide (the Guide) was released in 2013 to facilitate HIV testing in health service delivery settingsFootnote 5. The Guide provides evidence-based recommendations regarding who, when and how often to screen for HIV, as well as general information about testing procedures.

The Guide is currently available online through PHAC's website and has been printed and distributed through stakeholders and non-governmental organizations, including the Canadian AIDS Treatment Information Exchange (CATIE). Little is known about health care providers' awareness and use of the Guide, and whether the Guide is useful to health care providers.

Information related to health care providers' awareness and use of the Guide were collected over a three month period (June–August 2016) as part of a larger anonymous online survey. The Checklist for Reporting Results of Internet E-Surveys was followed where applicable for the reporting of methodology and resultsFootnote 7. The study was approved by the Health Canada and PHAC Research Ethics Board.

The survey was designed in consultation with evaluation, infectious disease and HIV content experts. The design was based on previous PHAC surveys with similar objectives, previous literature on survey design, factors that influence testing behaviour and known barriers and facilitators of testingFootnote 8 Footnote 9 Footnote 10 Footnote 11 Footnote 12. The survey and study protocol were externally peer-reviewed for face validity by an infectious disease physician and an expert in evaluation. Pilot testing of the questionnaire was then conducted with a panel of infectious disease experts prior to full-scale dissemination.

Participants were recruited to the voluntary survey via a link attached to a bilingual (English and French) email invitation sent to online newsletters/listservs and CATIE. Participants were also recruited by email invitations distributed by contacts of other Government of Canada departments and regional offices. A link to the survey was also sent to 23 associations for health professionals (e.g., physicians, nurses, social workers and community-based service providers). While only three of the professional associations agreed to disseminate the survey (Pacific AIDS Network, Canadian Public Health Association and Canadian AIDS Society), others may have disseminated the survey to their members without informing the research team. Individuals who received the survey via e-mail or newsletter may have also further disseminated the survey among their colleagues and networks so a participation rate cannot be calculated.

The survey was hosted on the Canadian Network for Public Health Intelligence Web Data online surveying tool and was available in English and French. Respondents were provided information related to privacy and data management/storage, length of the survey, purpose of the study and contact information for the principle investigator, prior to providing informed consent to participate. Participation was not incentivized. Participants' responses were included if they were 18 years of age or older, currently practicing and represented health care providers/professionals.

In total, 1,075 health care providers completed the survey. Survey respondents self-identified from all 13 provinces and territories, with the majority from Ontario, British Columbia and Quebec (Table 1). The majority of respondents were nurses (54%), with physicians (12%) representing the second most common provider type.

Most respondents (43%) worked in the area of sexually transmitted infections (STIs) and public health. Over 25% of respondents indicated that their primary area was 'other,' such as corrections, health promotion and public health. Family/general practice (16%), specialist (10%) and emergency/urgent care (3%) made up the remainder of the responses (Table 1). The majority of participants practiced in large urban population centres (53%). More than a third of providers had been practicing for more than 20 years (Table 1).

Of those who used the guide, the majority (84%) reported that they regularly incorporated recommendations from the Guide in their practice. Most users (77%) indicated being able to find the information they were looking for at least 75% of the time (Figure 4). Only 13 users (3.6%) reported finding errors or out-of-date material in the Guide. This included concerns about the practicality and conciseness of the Guide and the need to update the Guide with respect to new technologies, such as point-of-care testing and pre-exposure prophylaxis (PrEP).

Overall, the results of this national survey suggest that health care providers have only moderate awareness of PHAC's HIV Screening and Testing Guide but those who had, reported that they regularly incorporated recommendations from the Guide in their practice. It was noted that in a few areas, improvements could be made in the practicality/conciseness of the Guide and incorporating information on new prevention technologies such as PrEP would be useful.

Awareness may have been impacted by the dissemination methods used when first distributing the Guide. Email, the PHAC website and word-of-mouth appear to be effective knowledge dissemination methods as many respondents indicated that they learnt about the Guide through these routes, but our avenues of dissemination may have been more likely to target health care providers in the area of sexual health who would be more comfortable with HIV testing than other health care providers.

The strengths of the current study include the geographically representative sample, with respondents from all provinces and territories, and the diverse range of health care providers. Moreover, the survey was comprehensive, covering a number of areas that could be used to update the Guide.

Limitations include the use of a convenience sample, so that the participants may not be representative of all health care providers in Canada and it is not possible to generalize the results to all practitioners in Canada. This may have been particularly true of primary care health care providers. Moreover, the use of self-reported measures with respect to use of the Guide could have been subject to recall bias.

Awareness of the PHAC's HIV Screening and Testing Guide among health care providers could be improved. Although the current results need to be interpreted in light of the convenience sample, it suggests broader dissemination efforts to reach all of the potential users of the Guide may be needed as part of the overall effort to eliminate HIV in Canada.

The authors would like to thank the following individuals, in no particular order, for their contribution to this manuscript:

The authors would like to acknowledge the input provided by the various contributors throughout the various stages of the project on the survey design, Research Ethics Board submissions, data collection, analysis, and interpretation. Thank you to the team at the Canadian Network for Public Health Intelligence for their help in setting up the survey tool, and to the Health Canada Research Ethics Board. The authors would also like to thank the Expert Working Group of the Canadian Guidelines on Sexually Transmitted Infections for the help with pilot testing the survey, and the various organizations that helped disseminate the survey.

The authors have no sources of external funding to declare. This research was supported by the Public Health Agency of Canada.