Treatment of gonorrhea in Canada 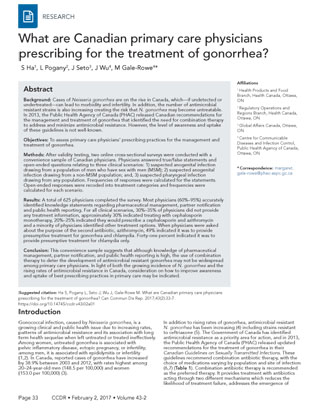 What are Canadian primary care physicians prescribing for the treatment of gonorrhea?

Background: Cases of Neisseria gonorrhea are on the rise in Canada, which—if undetected or undertreated—can lead to morbidity and infertility. In addition, the number of antimicrobial resistant strains is also increasing creating the risk that N. gonorrhea may become untreatable. In 2013, the Public Health Agency of Canada (PHAC) released Canadian recommendations for the management and treatment of gonorrhea that identified the need for combination therapy to address and minimize antimicrobial resistance. However, the level of awareness and uptake of these guidelines is not well-known.

Objectives: To assess primary care physicians’ prescribing practices for the management and treatment of gonorrhea.

Results: A total of 625 physicians completed the survey. Most physicians (60%–95%) accurately identified knowledge statements regarding pharmaceutical management, partner notification and public health reporting. For all clinical scenarios, 30%–35% of physicians did not provide any treatment information, approximately 30% indicated treating with cephalosporin monotherapy, 20%–25% indicated they would prescribe a cephalosporin and azithromycin and a minority of physicians identified other treatment options. When physicians were asked about the purpose of the second antibiotic, azithromycin, 49% indicated it was to provide presumptive treatment for gonorrhea and chlamydia. Forty-one percent indicated it was to provide presumptive treatment for chlamydia only.

Conclusion: This convenience sample suggests that although knowledge of pharmaceutical management, partner notification, and public health reporting is high, the use of combination therapy to deter the development of antimicrobial resistant gonorrhea may not be widespread among primary care physicians. In light of both the growing incidence of N. gonorrhea and the rising rates of antimicrobial resistance in Canada, consideration on how to improve awareness and update of best prescribing practices in primary care may be indicated.

Gonococcal infection, caused by Neisseria gonorrhea, is a growing clinical and public health issue due to increasing rates, patterns of antimicrobial resistance and its association with long term health sequelae when left untreated or treated ineffectively. Among women, untreated gonorrhea is associated with pelvic inflammatory disease, ectopic pregnancy, or infertility; among men, it is associated with epididymitis or infertility Footnote 1Footnote 2. In Canada, reported cases of gonorrhea have increased by 38.9% between 2003 and 2012, with rates highest among 20–24-year-old men (148.5 per 100,000) and women (153.0 per 100,000) Footnote 3.

In addition to rising rates of gonorrhea, antimicrobial resistant N. gonorrhea has been increasing Footnote 4 including strains resistant to ceftriaxone Footnote 5. The Government of Canada has identified antimicrobial resistance as a priority area for action, and in 2013, the Public Health Agency of Canada (PHAC) released updated recommendations for the treatment of gonorrhea in their Canadian Guidelines on Sexually Transmitted Infections. These guidelines recommend combination antibiotic therapy, with the choice of medications varying by population and site of infection Footnote 6Footnote 7 (Table 1). Combination antibiotic therapy is recommended as the preferred therapy. It provides treatment with antibiotics acting through two different mechanisms which reduces the likelihood of treatment failure, addresses the emergence of multi-drug resistant gonorrhea, and provides effective treatment for chlamydia Footnote 8Footnote 9Footnote 10Footnote 11Footnote 12. However, other guidelines are available and may inform the practice of primary care physicians.

Findings from Canadian sexual health clinics suggest that combination therapy is prescribed at least 76% of the time Footnote 13 however, there is a paucity of evidence documenting primary care physicians’ prescribing practices. Primary care health professionals have an important role in the prevention and management of antimicrobial resistant gonorrhea.

The objectives of the study were to describe primary care physicians’ knowledge related to the management of antimicrobial resistant (AMR) gonorrhea and to identify their prescribing preference for three clinical scenarios.

PHAC commissioned two online cross-sectional surveys from an online survey company who recruits physicians across Canada who agree to be contacted for surveys. In April 2014 and March 2015, participating physicians were invited to take a 20-minute online survey with both open- and closed-ended questions. Survey questions were derived from previously developed questionnaires and were tested for face validity with PHAC nurses, physicians and epidemiologists. Physicians were asked to answer 14 true/false statements regarding the epidemiology, diagnosis, management and public health reporting of AMR gonorrhea. Open-ended responses for three clinical scenarios were solicited: 1) Suspected anogenital infection drawing from a population of men MSM; 2) suspected anogenital infection drawing from a non-MSM population; and 3) suspected pharyngeal infection drawing from any population. Physicians received a financial incentive for completing the survey.

In 2015, a question was added to clarify physicians’ reasons for prescribing the second antibiotic, azithromycin, for the treatment of gonorrhea.

Data were analyzed using SAS EG (v5.1). Pearson’s chi-square test was used to compare the two samples. The datasets from both survey cycles were combined for analysis because no differences were found between the sample populations. The frequency of correct responses was calculated for each of the true/false statements on the diagnosis, treatment, follow-up and public health reporting of gonorrhea. The open-ended responses for the three clinical scenarios were recoded into the following treatment options: ceftriaxone and azithromycin; cefixime and azithromycin; cephalosporin alone; azithromycin alone; spectinomycin with azithromycin and other pharmaceutical regimens. Dosing information and route of administration were not considered due to large amounts of missing data. Physicians who indicated “not applicable”, “do not treat men”, “not sure”, or “don’t know” were grouped under “no treatment information”.

Two thirds of respondents were male (66%), 83% of physicians had 10 or more years of practice and 85% worked in family medicine. Almost 75% of respondents encountered at least one case of gonorrhea in the previous year (Table 2).

Knowledge related to the management of antimicrobial resistant gonorrhea

Overall, 60% to 95% of physicians accurately identified knowledge statements regarding pharmaceutical management, partner notification and public health reporting. Approximately two thirds of the respondents accurately identified statements related to current trends in rising incidence, the most common age groups affected and the presence of antimicrobial resistant gonorrhea in Canada (Table 3). Most respondents (87%) identified the importance of co-treatment for chlamydia.

These online surveys found that participating physicians were knowledgeable about the pharmaceutical management, partner notification, and public health reporting of N. gonorrhea, but appeared to be less knowledgeable about the use of combination therapy to deter the development of antimicrobial resistant gonorrhea. Approximately 25% reported and their intent to prescribe the specific combination therapy for anogenital infection identified by the Canadian Guidelines on Sexually Transmitted Infections as the preferred therapy to prevent treatment failure and to mitigate the development of antimicrobial resistance. Responding physicians appeared to be less confident in prescribing for pharyngeal gonorrhea. These findings are in contrast to studies of sexual health clinics, where prescribing combination therapy is routine Footnote 14Footnote 15Footnote 16Footnote 17.

Monotherapy for the treatment of gonorrhea is not recommended as treatment failures with oral cefixime monotherapy have been documented in Canada Footnote 12Footnote 18Footnote 19. In our sample, approximately 30% of physicians indicated they would treat gonorrhea with a cephalosporin monotherapy; however, close to half of physicians reported the purpose of the second antibiotic (often azithromycin) was for chlamydia only (and not gonorrhea) and 87% believed that co-treatment for chlamydia is advisable when treating for gonorrhea. As such, it is hypothesized that primary care physicians may be prescribing combination therapy, but largely to cover possible co-infection.

There are some limitations to consider. The response rate was very low and the sample may not be representative of primary care physicians in Canada. In addition, a few of the questions may not have been clear and physicians’ answers to epidemiological or diagnostic statements may have been consistent with their local epidemiology and guidelines, but not with national statistics or the Canadian Guidelines on Sexually Transmitted Infections.

In light of the rising incidence of gonorrhea and AMR gonorrhea, increasing awareness and uptake by primary care physicians of the routine use of combination therapy may help minimize treatment failure and deter the development of AMR gonorrhea.

We would like to thank the Expert Working Group for the Canadian Guidelines on Sexually Transmitted Infections for their contributions.

This work was supported by the Public Health Agency of Canada. The authors have no external sources of funding to declare.