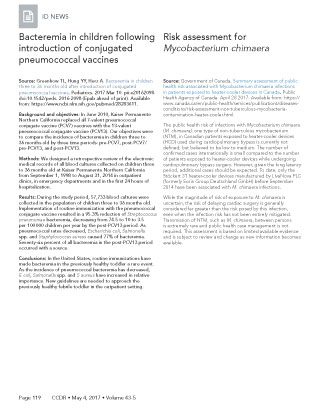 Methods: We designed a retrospective review of the electronic medical records of all blood cultures collected on children three to 36 months old at Kaiser Permanente Northern California from September 1, 1998 to August 31, 2014 in outpatient clinics, in emergency departments and in the first 24 hours of hospitalization.

Results: During the study period, 57,733 blood cultures were collected in the population of children three to 36 months old. Implementation of routine immunization with the pneumococcal conjugate vaccine resulted in a 95.3% reduction of Streptococcus pneumoniae bacteremia, decreasing from 74.5 to 10 to 3.5 per 100 000 children per year by the post-PCV13 period. As pneumococcal rates decreased, Escherichia coli, Salmonella spp and Staphylococcus aureus caused 77% of bacteremia. Seventy-six percent of all bacteremia in the post-PCV13 period occurred with a source.

The public health risk of infectionswith Mycobacterium chimaera (M. chimaera), one type of non-tuberculous mycobacterium (NTM), in Canadian patients exposed to heater-cooler devices (HCD) used during cardiopulmonary bypass is currently not defined, but believed to be low to medium. The number of confirmed cases internationally is small compared to the number of patients exposed to heater-cooler devices while undergoing cardiopulmonary bypass surgery. However, given the long latency period, additional cases should be expected. To date, only the Stöckert 3T heater-cooler devices manufactured by LivaNova PLC (formerly Sorin Group Deutschland GmbH) before September 2014 have been associated with M. chimaera infections.

While the magnitude of risk of exposure to M. chimaera is uncertain, the risk of delaying cardiac surgery is generally considered far greater than the risk posed by this infection, even when the infection risk has not been entirely mitigated. Transmission of NTM, such as M. chimaera, between persons is extremely rare and public health case management is not required. This assessment is based on limited available evidence and is subject to review and change as new information becomes available.