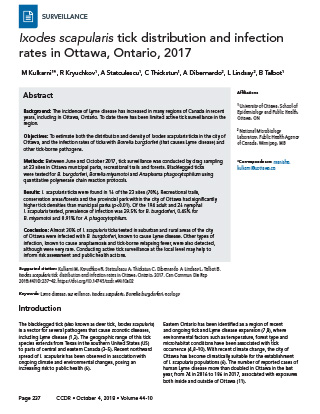 Background: The incidence of Lyme disease has increased in many regions of Canada in recent years, including in Ottawa, Ontario. To date there has been limited active tick surveillancein the region.

Objectives: To estimate both the distribution and density of Ixodes scapularis ticks in the city of Ottawa, and the infection rates of ticks with Borrelia burgdorferi (that causes Lyme disease) and other tick-borne pathogens.

Results: I. scapularis ticks were found in 16 of the 23 sites (70%). Recreational trails, conservation areas/forests and the provincial park within the city of Ottawa had significantly higher tick densities than municipal parks (p<0.01). Of the 194 adult and 26 nymphal I. scapularis tested, prevalence of infection was 29.5% for B. burgdorferi, 0.45% for B. miyamotoi and 0.91% for A. phagocytophilum.

Conclusion: Almost 30% of I. scapularis ticks tested in suburban and rural areas of the city of Ottawa were infected with B. burgdorferi, known to cause Lyme disease. Other types of infection, known to cause anaplasmosis and tick-borne relapsing fever, were also detected, although were very rare. Conducting active tick surveillance at the local level may help to inform risk assessment and public health actions.

The blacklegged tick (also known as deer tick, Ixodes scapularis) is a vector for several pathogens that cause zoonotic diseases, including Lyme disease Footnote 1Footnote 2. The geographic range of this tick species extends from Texas in the southern United States (US) to parts of central and eastern Canada Footnote 3Footnote 4Footnote 5. Recent northward spread of I. scapularis has been observed in association with ongoing climate and environmental changes, posing an increasing risk to public health Footnote 6.

Eastern Ontario has been identified as a region of recent and ongoing tick and Lyme disease expansion Footnote 7Footnote 8, where environmental factors such as temperature, forest type and microhabitat conditions have been associated with tick occurrence Footnote 4Footnote 8Footnote 9Footnote 10. With recent climate change, the city of Ottawa has become climatically suitable for the establishment of I. scapularis populations Footnote 6. The number of reported cases of human Lyme disease more than doubled in Ottawa in the last year, from 74 in 2016 to 186 in 2017, associated with exposures both inside and outside of Ottawa Footnote 11.

Although ticks are most known for carrying the bacteria that causes Lyme disease, they can also carry other pathogens. For example, ticks can carry Anaplasma phagocytophilum that causesanaplasmosis. The first confirmed human case of anaplasmosis in a health unit near Ottawa was reported recently Footnote 12. In addition, ticks can carry Borrelia miyamotoi, causing an infection sometimes called tick-borne relapsing fever Footnote 13Footnote 14. Detection is important as these diseases are treatable and full recovery can be obtained when identified and treated early.

Given the recent increase in the number of cases of Lyme disease reported in Ottawa and ongoing expansion of tick populations in eastern Ontario, there was an identified need for surveillance of tick populations to assess the public health risk and inform public health action. Two types of tick surveillance can be used in a given area: passive and active. Passive surveillance involves health care providers and/or the public submitting ticks that had been attached to people Footnote 15. Passive surveillance is useful for signalling the presence of potential risk in areas where ticks and tick-borne pathogens are newly emerging. Active surveillance involves field sampling of ticks from the environment either by dragging a flannel sheet over a potentially affected area or collecting and examining (and possibly testing) ticks infesting small mammal hosts such as mice Footnote 15. To determine whether tick populations are established, all three life stages of the tick should be detected for two consecutive years Footnote 15.

The objective of this study was to estimate the distribution, density and infection rates of ticks in the city of Ottawa.

The city of Ottawa is the nation’s capital and is situated in eastern Ontario on the south bank of the Ottawa River. It has a population of almost one million people and covers a large geographic area of almost 3,000 km2 Footnote 16. In addition to the urban core and several suburban districts, the city has abundant green space including conservation areas, parks, trails, wetlands, forests and farmland.

We conducted a survey of 23 sites including nine municipal parks, seven conservation areas and forests, six recreational trails and one provincial park within the city of Ottawa to assess the occurrence and density of I. scapularis ticks and rates of infection with tick-borne pathogens (Table 1). Sites were selected based on an ecological niche model of I. scapularis Footnote 10, with locations chosen across urban, suburban and rural areas of Ottawa.

A team of three researchers with previous field training conducted active tick surveillance using the drag sampling method described by Public Health Ontario Footnote 17 at 23 sites: 19 in spring/summer 2017 (June to August) and all 23 sites in fall 2017 (September to October). Ticks were collected by dragging a 1 metre2 white flannel cloth across the forest floor and surrounding vegetation for a total of at least three person-hours at each site, if the size of the area permitted, with less than three person-hours in smaller sites. The drag cloth was checked for ticks every 50 metres and geographic coordinates were recorded using a handheld global positioning system (GPS) device (Garmin eTrex 20x). Adults, nymphs and larvae were maintained alive in plastic vials and transported on ice to the laboratory at the University of Ottawa for species identification and possible testing.

All adults, nymphs and larvae were identified by microscopic examination for species verification and sex using standard taxonomic keys Footnote 18Footnote 19Footnote 20. Adult and nymphal I. scapularis ticks were tested for B. burgdorferi, A. phagocytophilum, and B. miyamotoi using quantitative polymerase chain reaction (qPCR) assays, which allow quantification of the amplified DNA molecules according to previously published protocols Footnote 13Footnote 21. Prior to testing, the qPCR assays established at the University of Ottawa were validated using a panel of test samples provided by the National Microbiology Laboratory (NML) in Winnipeg. Ticks were dissected and total genomic DNA was extracted using the QIAamp DNA mini kit (QIAGEN Inc., Mississauga, Ontario). A duplex qPCR assay targeting the 23S rRNA and the msp2 gene was used to identify B. burgdorferi sensu lato and A. phagocytophilum, respectively. Borrelia burgdorferi sensu stricto and B. miyamotoi DNA was then confirmed in positive samples by targeting their ospA and glpQ genes, respectively. Amplification was carried out using the BioRad CFX96 Real-Time PCR Detection System. After amplification and real-time data acquisition, analysis was performed using the CFX Maestro software (BioRad, Hercules, California, US). Subsequent testing by nested PCR and sequencing was performed at NML for samples positive with screening primers but negative with confirmatory assays.

In total, we collected 239 I. scapularis ticks, including 194 adults, 26 nymphs and 19 larvae, during 135 person-hours of drag sampling. Ixodes scapularis ticks were detected at 16 of the 23 (70%) sites (Figure 1). Other tick species were found at three sites: Haemaphysalis (n=6) at two sites and Ixodes marxi (n=1) at one site.

Overall mean I. scapularis density was 2.6 (standard deviation [SD] 4.0) per person-hour in Ottawa sites. Mean tick density differed by type of site, with significantly higher tick density in the recreational trail, conservation area/forest and provincial park sites with a mean (SD) of 4.1 (4.5) compared to the municipal parks mean (SD) of 0.3 (0.5) (p<0.01). Risk areas based on a 5-km radius from sites with tick occurrence were widely distributed around Ottawa, with highest coverage in forested areas of the western region of Ottawa and along the Ottawa River (Figure 2).

All 220 adult and nymphal I. scapularis ticks were tested for pathogens. Borrelia burgdorferi was detected in ticks from 11 of the 16 sites where I. scapularis were found. In total, 65 (29.5%) of all tested ticks were positive for B. burgdorferi, and infection rates varied considerably by site, ranging from 0% to 50% (Table 2). Borrelia miyamotoi and A. phagocytophilum were detected in two sites in Ottawa representing 0.45% (n=1) and 0.91% (n=2) of the blacklegged ticks tested (Table 2).

This study provides a recent picture of the distribution of I. scapularis ticks and their infection rates with B. burgdorferi and other pathogens of public health significance in urban, suburban and rural areas of the city of Ottawa, where the number of Lyme disease cases have been rapidly increasing. We show that 70% of sampled sites were positive for I. scapularis ticks, with highest tick density observed in recreational trails and conservation areas/forests, signalling the potential for human-tick encounter in these sites. Prevalence of infection with B. burgdorferi in collected ticks varied considerably, with an average of 29.5% in the 16 Ottawa sites where I. scapularis were found.

The study was limited by small numbers of collected ticks (n<30) in the majority of sites within Ottawa, which reduces the robustness of the pathogen prevalence estimates. Therefore, infection rates should be interpreted with caution for these sites. Sampling was restricted from June to October due to heavy spring rainfall, which may have limited our ability to detect ticks in some sites. Detection may also have been limited by the use of drag sampling, which has been reported to be 50% sensitive Footnote 15, so some sites may have been considered falsely negative for blacklegged ticks because the density of established tick populations was very low.

Given the widespread distribution of I. scapularis ticks around the city of Ottawa and the potential for further expansion of tick populations, this study provides an important baseline for monitoring ticks and tick-borne pathogens of public health significance in this region. Although the bacterium causing Lyme disease was the most common type of tick infection, infections causing anaplasmosis and tick-borne relapsing fever were also found, suggesting the potential risk of emergence of these new pathogens in Ottawa.

Further research is needed to better understand the associations between expanding environmental risk in the area and human Lyme disease exposure. Ongoing active tick surveillance is needed over consecutive years. To determine whether tick populations are established, all three life stages of the tick need to be detected for two consecutive years. This information can be used to inform public health actions such as continued public health messaging to health care providers and the public to raise awareness of Lyme disease and other emerging tick-borne infections, associated risks, diagnostic tests as well as both curative and preventive measures.

We would like to thank Ottawa Public Health for providing data on human Lyme disease cases. We also thank Itai Malkin and Merlin Caron-Levesque for their contributions to the fieldwork.

This study was funded by a grant from the Canadian Institutes for Health Research (CIHR) to Manisha A Kulkarni for a research project entitled Public Health Risk Assessment Tools for Emerging Vector-borne Diseases, and was further supported by the Public Health Agency of Canada.