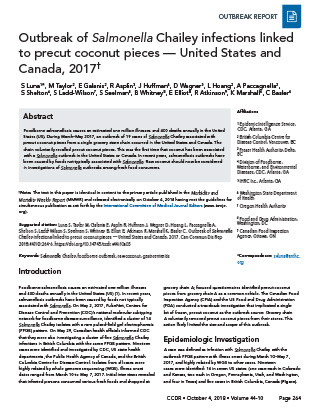 Foodborne salmonellosis causes an estimated one million illnesses and 400 deaths annually in the United States (US) Footnote 1. In recent years, salmonellosis outbreaks have been caused by foods not typically associated with Salmonella. On May 2, 2017, PulseNet, Centers for Disease Control and Prevention (CDC)’s national molecular subtyping network for foodborne disease surveillance, identified a cluster of 14 Salmonella Chailey isolates with a rare pulsed-field gel electrophoresis (PFGE) pattern. On May 29, Canadian health officials informed CDC that they were also investigating a cluster of five Salmonella Chailey infections in British Columbia with the same PFGE pattern. Nineteen cases were identified and investigated by CDC, US state health departments, the Public Health Agency of Canada, and the British Columbia Centre for Disease Control. Isolates from all cases were highly related by whole genome sequencing (WGS). Illness onset dates ranged from March 10 to May 7, 2017. Initial interviews revealed that infected persons consumed various fresh foods and shopped at grocery chain A; focused questionnaires identified precut coconut pieces from grocery chain A as a common vehicle. The Canadian Food Inspection Agency (CFIA) and the US Food and Drug Administration (FDA) conducted a traceback investigation that implicated a single lot of frozen, precut coconut as the outbreak source. Grocery chain A voluntarily removed precut coconut pieces from their stores. This action likely limited the size and scope of this outbreak.

A case was defined as infection with Salmonella Chailey with the outbreak PFGE pattern with illness onset during March 10–May 7, 2017, and highly related by WGS to other cases. Nineteen cases were identified: 14 in seven US states (one case each in Colorado and Kansas, two each in Oregon, Pennsylvania, Utah, and Washington, and four in Texas) and five cases in British Columbia, Canada (Figure). Infected persons ranged in age from <1 to 87 years (median = 57 years), including two aged <5 years; nine persons were female. Among 17 persons for whom information on hospitalization was known, three were hospitalized; no deaths occurred.


Infected persons in the US were initially interviewed using state-developed questionnaires or CDC’s National Hypothesis Generating Questionnaire; both collected information on foods consumed and locations where food was purchased during the 7 days before illness onset. Review of data collected using these questionnaires revealed that among nine persons with information on grocery stores, seven reported shopping at grocery chain A, which comprises health food stores. Other commonly reported foods consumed included oranges (six persons), strawberries (five), tomatoes (four), kale, tuna, zucchini, almonds (three each), and shrimp (two). The tuna and other seafood exposures were noteworthy because a strain with the outbreak PFGE pattern had been isolated from yellowfin tuna imported from Indonesia in 2010. Because of the strong fresh-foods signal from the initial information, open-ended interviews were conducted to obtain more information about foods purchased from grocery chain A and other fresh foods that were not included on the standard National Hypothesis Generating Questionnaire Footnote 2 used during the initial interviews. Open-ended, iterative interviews were conducted by a single interviewer to gather more detailed information about foods persons ate before they became ill. Interviews were completed for eight persons, including five who had already been interviewed with a standard questionnaire. One person reported eating precut coconut pieces from grocery chain A, two persons reported drinking coconut water, two reported eating sushi, seven reported eating oranges, and three reported eating seaweed snacks. Because open-ended interviews did not identify a single food item of interest, a focused questionnaire was developed. The focused questionnaire included detailed, open-ended questions about food items purchased from grocery chain A, as well as specific questions asking about consumption of coconut, coconut water, other fruits, vegetables, nuts, seaweed, sushi, and other fish.

CDC and the British Columbia Centre for Disease Control requested consumer purchase information from grocery chain A to continue to generate hypotheses while reinterviewing persons. Because grocery chain A did not have a shopper card program, consenting persons were asked to share the purchase dates, total purchase dollar amounts, store location, and the first six digits and last four digits of the credit card used at time of purchase. Grocery chain A used this information to retrieve receipts.

Clinical isolates were characterized by WGS. Whole genome, high-quality single nucleotide polymorphism (hqSNP) analysis (whole genome, high-quality single nucleotide polymorphism analysis was performed using the Lyve-SET hqSNP pipeline https://github.com/lskatz/lyve-SET) indicated that the 19 clinical isolates differed by 0–4 hqSNPs, indicating high genetic relatedness. An additional two Salmonella Chailey isolates with the same PFGE pattern from persons in the US and Canada with illness onset dates consistent with this outbreak were excluded, as they differed from the rest of the isolates by approximately 100 hqSNPs. The isolates from yellowfin tuna imported from Indonesia in 2010 were 19 hqSNPs different from the clinical isolates and were also considered to be not closely related genetically.

Canadian officials conducted an inspection at a location of grocery chain A and reported that frozen, vacuum-packed coconut pieces were received at the store every other day. These were thawed at the store and repacked into smaller plastic tubs for sale in the produce area, with a five-day shelf life applied. Grocery store A headquarters communicated to US officials that all of their stores thaw and repack this product in the store. FDA visited three US-based, FDA-regulated firms associated with the import and repackaging of this product and identified no objectionable conditions.

International collaboration on the epidemiologic and laboratory investigation was important for identifying that the Canadian and US cases were part of the same cluster. This allowed investigators to focus on food purchased at grocery chain A and to identify frozen precut coconut pieces as the outbreak source.

Early communication and collaboration with grocery chain A assisted the investigation through the collection of detailed purchase history information and facilitated a rapid removal of precut coconut from stores. The timely action of grocery chain A likely limited the size and scope of this outbreak.

In recent years, salmonellosis outbreaks have been caused by foods not typically associated with Salmonella. This was the first time that coconut has been associated with an outbreak of Salmonella in the US or Canada Footnote 3. Cases were reported throughout the US and Canada that were associated with different grocery chain A locations, supplied by different distribution centers. The single lot of imported, precut coconut pieces was processed over many months but remained frozen and minimally manipulated once in the US. Therefore, contamination likely occurred in the country of origin, Indonesia. Furthermore, the frozen yellowfin tuna with the same PFGE pattern was imported from Indonesia in 2010, providing support for the hypothesis that a food product from Indonesia could be the source of the outbreak.

This was a complicated investigation, and it required considerable time and effort by investigators in two countries to identify the food product ultimately responsible for the outbreak. Although no coconut from the suspected lot was available for laboratory sampling, epidemiologic and traceback information indicates that frozen precut coconut pieces were the source of the outbreak. In light of this finding, public health officials might consider raw coconut in investigations of Salmonella outbreaks among consumers of fresh foods.