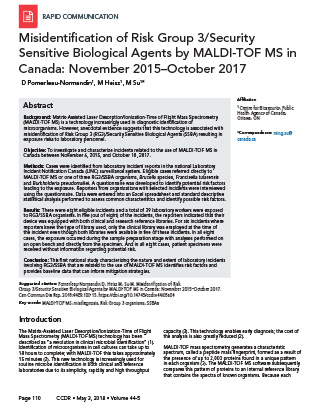 Download this article as a PDF
Published by: The Public Health Agency of Canada
Issue: Volume 44-5: Emergency Response
Date published: May 3, 2018
ISSN: 1481-8531
Subscribe to CCDR

Objective: To investigate and characterize incidents related to the use of MALDI-TOF MS in Canada between November 6, 2015, and October 10, 2017.

Results: There were eight eligible incidents and a total of 39 laboratory workers were exposed to RG3/SSBA organisms.In five (out of eight) of the incidents, the reporters indicated that their device was equipped with both clinical and research reference libraries. For six incidents where reporters knew the type of library used, only the clinical library was employed at the time of the incident even though both libraries were available in five of these incidents. In all eight cases, the exposure occurred during the sample preparation stage with analyses performed on an open bench and directly from the specimen. And in all eight cases, patient specimens were received without information regarding potential risk.

Conclusion: This first national study characterizing the nature and extent of laboratory incidents involving RG3/SSBA that are related to the use of MALDI-TOF MS identifies risk factors and provides baseline data that can inform mitigation strategies.

The Matrix-Assisted Laser Desorption/Ionization-Time of Flight Mass Spectrometry (MALDI-TOF MS) technology has been described as "a revolution in clinical microbial identification"Footnote 1. Identification of microorganisms in cell cultures can take up to 18 hours to complete; with MALDI-TOF this takes approximately 15 minutesFootnote 2. This new technology is increasingly used for routine microbe identification in both clinical and reference laboratories due to its simplicity, rapidity and high throughput capacityFootnote 3. This technology enables early diagnosis; the cost of the analysis is also greatly reducedFootnote 2.

MALDI-TOF mass spectrometry generates a characteristic spectrum, called a peptide mass fingerprint, formed as a result of the presence of up to 2,000 proteins found in a unique pattern in each organismFootnote 3. The MALDI-TOF MS software subsequently compares this pattern of proteins to an internal reference library that contains the spectra of known organisms. Because each bacterial species has a unique protein composition, the spectra enables accurate identificationFootnote 4.

The main limitation of this technology is that the reference libraries must contain the spectrum of the organism in a sample to produce reliable identificationFootnote 5. In the absence of the correct spectrum, the device will either not identify the organism or provide the identity of a similar organism. Close (but not exact) identifications can be a problem as closely related organisms can have different risk levels and therefore different safety protocols in the laboratory setting.

Organisms are classified in two ways: by risk group, based on an organism's pathogenicity, virulence, availability of treatment and the risk of spread to individuals or the public (Table 1); and as Security-Sensitive Biological Agents (SSBAs), a subset of human pathogens that pose a risk due to their potential for use as a biological weaponFootnote 6. Some, but not all Risk Group (RG)3, and most RG4 organisms are SSBAs.

If a specimen contains an RG3 organism but is misidentified as RG2, it may be handled on an open bench, rather than in a biosafety cabinet. Thus when misidentification occurs, laboratory technicians may not be appropriately protected and this can lead to exposure incidents.

The Public Health Agency of Canada (PHAC) has the capacity to assess this risk of misidentification from MALDI-TOF MS at the national level through the Laboratory Incident Notification Canada (LINC) surveillance program. This was set up under the Human Pathogens and Toxins Act, which came into full force in 2015 and which made the reporting of laboratory incidents to PHAC mandatory. By doing so, PHAC is able to develop national statistics on biosafety and biosecurity issues and detect emerging trends in close to real time.

The LINC first identified issues related to MALDI-TOF MS when five exposure incidents involving the use of this technology were reported over a nine month period. All five incidents involved RG3/SSBA organisms: Burkholderia pseudomallei, Francisella tularensis or Brucella species. They are the causative agents of melioidosis, tularemia and brucellosis, respectively. They present an increased risk for laboratory technicians as they are easily transmitted through aerosols and because their slow growth on standard culture media often delays the suspicion of an RG3/SSBAFootnote 13Footnote 29Footnote 30Footnote 31. Detection of these five incidents triggered an investigation to assess the nature and extent of this problem at the national level.

The objective of this study was to describe the exposure incidents related to MALDI-TOF MS use in Canada between November 2015 and October 2017, and to identify risk factors associated with these exposures.

Incidents between November 6, 2015 (date of the first incident) and October 10, 2017 (last date of data gathering) were reviewed. Reports were selected for further assessment based on the following inclusion criteria:

Based on these criteria, 17 reports from 15 reporters (organizations) were selected for assessment.

Two LINC program agents interviewed the reporters between October and November 2017, using a list of questions provided to the interviewee ahead of time. The questionnaire collected data on the possession of the MALDI-TOF MS device and its library extension(s), on the method of analysis, including whether analysis was performed on an open bench, on specific standard operating procedure (SOPs) for MALDI-TOF MS and triggers for enhanced SOPs and, in the opinion of the interviewee, whether the incident was caused, wholly or in part, as a result of misidentifying the organism. Data were also gathered on whether the medical staff, who requested the sample identification, provided information with the specimen (e.g., suspected diagnosis, patient medical and travel history) that may have alerted laboratory workers about the potential risk. An incident was confirmed as being part of the present study once the responsible reporter corroborated that the incident resulted from—or, at least, partly resulted from—misidentification or lack of identification from a MALDI-TOF MS device.

Responses to the questionnaire were input into a spreadsheet designed for the purpose of this investigation. Excel 2010 was used for standard descriptive statistical analysis in order to assess and identify common characteristics.

Of the 15 organizations contacted regarding 17 eligible incidents, 12 had a MALDI-TOF MS device. Among the remaining three organizations that did not have a device, two incidents still partly resulted from the use of MALDI-TOF MS. The reporters indicated that the specimens received for confirmation had previously been misidentified or not identified following MALDI-TOF MS analysis in a different laboratory.

The reporters at the 12 organizations that owned a MALDI-TOF MS device confirmed that, in six cases, the incidents were partly or wholly a result of relying on MALDI-TOF MS identification. With the addition of the two cases described above, in different laboratories, eight incidents related to misidentification or nonidentification by MALDI-TOF MS (Figure 1). These incidents represented over a third (n=8/17) of all incident reports LINC received between November 6, 2015, and October 10, 2017, that involved the three selected biological agents.

Based on the information provided in the eight incident reports, of which two were non-exposure incidents, 39 laboratory technicians were exposed. Burkholderia pseudomallei was the biological agent involved in three of the incidents, Brucella species in another three, and F. tularensis in two (Table 2).

All eight incidents related to the use of MALDI-TOF MS occurred during the sample preparation stage, and all analyses were performed on an open bench, directly from the specimen. Furthermore, in every incident where the organization possessed a MALDI-TOF MS device (n=6), the reporter developed enhanced SOPs designed specifically for the use of this technology following the incident. The triggers for these enhanced SOPs included a slow growth coupled with small gram-negative coccobacilli (n=2), no identification results (n=2), the geographic region from which the patient specimen originated (n=1) and the specimen type (n=1).

Finally, in all eight incidents related to the use of MALDI-TOF MS, specimens were received without clinical or travel history information (i.e. to trigger suspicion of RG3/SSBA agent).

This is the first national study assessing laboratory incidents related to misidentification or lack of identification of RG3/SSBAs by MALDI-TOF MS devices. We found that 39 individuals were exposed to RG3/SSBA organisms in six exposure incidents involving MALDI-TOF MS. These organisms are consistent with other incidents reported in the literatureFootnote 3Footnote 10Footnote 11Footnote 12Footnote 15Footnote 19Footnote 22.

One risk factor associated with an exposure incident was reliance on the clinical reference library software. According to the reporters, although both clinical and research reference libraries were available in most cases, only the clinical libraries were in use when the incidents occurred as the two libraries cannot be used simultaneously and switching libraries requires a series of lengthy steps that are impractical under current workloads. Therefore, while complementary reference libraries such as research-use only or security-relevant libraries can help mitigate the risk of misidentification by relying on a wider selection of spectra, their utility remains limited as both types of library cannot be actively combined. These results are consistent with other reports in the literature that suggest MALDI-TOF MS clinical libraries do not reliably identify certain RG3/SSBAs pathogensFootnote 9Footnote 11Footnote 12Footnote 20Footnote 22.

A second risk factor associated with exposure incidents was an open-bench approach for sample preparation. All incidents occurred while preparing the sample and all analyses were performed directly from specimens on an open bench. This, however, does not actually reflect manufacturers' recommendations, which suggest that analysis be performed from extractionFootnote 32 that effectively deactivates pathogens in most cases and thereby reduces exposure risks.

A third risk factor associated with an exposure incident was the lack of alerting information on the laboratory requisition. A challenge with identifying these three diseases is that they usually present with nonspecific symptoms that can easily be mistaken for more common illnessesFootnote 8Footnote 25Footnote 26Footnote 27. As such, clinicians may not suspect an RG3/SSBA diagnosis and may not provide alerting information on the requisition forms (i.e. suspected diagnosis, patient travel history) that would cause the initiation of adequate safety measures for the manipulation of the patient specimens in laboratoriesFootnote 30Footnote 33.

Our study identified two incidents from samples received following misidentification from a MALDI-TOF MS device in a different laboratory. This revealed that exposures due to a single specimen may occur in multiple laboratories.

The main strength of this study is that it is based on mandatory, standardized and detailed reporting of laboratory incidents. Furthermore, it provides the baseline to assess the evolution of the problem over time.

There are also a few limitations to consider. The incident sample identified is likely incomplete for two reasons. First, the eligibility criteria may have missed some incidents. There is currently no efficient way to identify with certainty all incidents related to the use of MALDI-TOF MS among all laboratory incidents reported to LINC. Second, this investigation only captured incidents involving the three selected organisms. Indeed, MALDI-TOF MS devices have also been reported to misidentify or be unable to identify certain RG2 organisms as wellFootnote 34. Finally, the small number of exposure incidents over almost a two-year time period is inherently unstable. Additional studies showing trends over time will further inform the extent of this problem.

This national surveillance study of laboratory incidents related to the misidentification of RG3/SSBAs by MALDI-TOF MS identified three risk factors: the reliance on clinical reference libraries; the use of an open-bench approach for sample preparation; and the lack of alerting information on the laboratory requisitions. This information can be used to raise awareness regarding the limitations of the MALDI-TOF MS technology and stimulate work on mitigation measures to help prevent similar incidents. It also provides the baseline for surveillance over time. The Centre for Biosecurity is continuing the investigation and working with stakeholders to address the issue and improve biosafety measures.

We would like to thank all the reporters contacted throughout the investigation process for their active collaboration. We would also like to extend our appreciation to all the licence holders and biological safety officers across Canada for providing high quality reports.