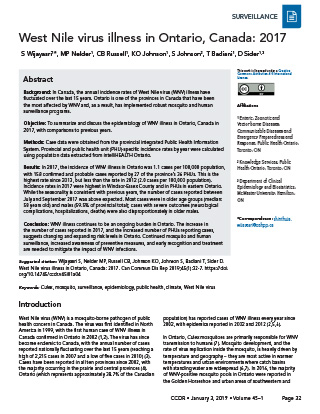 Background: In Canada, the annual incidence rates of West Nile virus (WNV) illness have fluctuated over the last 15 years. Ontario is one of the provinces in Canada most affected by WNV and, as a result, has implemented robust mosquito and human surveillance programs.

Objective: To summarize and discuss the epidemiology of WNV illness in Ontario, Canada in 2017, with comparisons to previous years.

Results: In 2017, the incidence of WNV illness in Ontario was 1.1 cases per 100,000 population, with 158 confirmed and probable cases reported by 27 of the province’s 36 PHUs. This is the highest rate since 2013, but less than the rate in 2012 (2.0 cases per 100,000 population). Incidence rates in 2017 were highest in Windsor-Essex County and in PHUs in eastern Ontario. While the seasonality is consistent with previous years, the number of cases reported between July and September 2017 was above expected. Most cases were in older age groups (median: 58 years old) and males (59.5% of provincial total); cases with severe outcomes (neurological complications, hospitalizations, deaths) were also disproportionately in older males.

Conclusion: WNV illness continues to be an ongoing burden in Ontario. The increase in the number of cases reported in 2017, and the increased number of PHUs reporting cases, suggests changing and expanding risk levels in Ontario. Continued mosquito and human surveillance, increased awareness of preventive measures, and early recognition and treatment are needed to mitigate the impact of WNV infections.

West Nile virus (WNV) is a mosquito-borne pathogen of public health concern in Canada. The virus was first identified in North America in 1999, with the first human case of WNV illness in Canada confirmed in Ontario in 2002 Footnote 1Footnote 2. The virus has since become endemic to Canada, with the annual number of cases reported nationally fluctuating over the last 15 years (reaching a high of 2,215 cases in 2007 and a low of five cases in 2010) Footnote 3. Cases have been reported in all ten provinces since 2002, with the majority occurring in the prairie and central provinces Footnote 4. Ontario (which represents approximately 38.7% of the Canadian population) has reported cases of WNV illness every year since 2002, with epidemics reported in 2002 and 2012 Footnote 2Footnote 5Footnote 6.

In Ontario, Culex mosquitoes are primarily responsible for WNV transmission to humans Footnote 7. Mosquito development, and the rate of virus replication inside the mosquito, is heavily driven by temperature and geography – they are most active in warmer temperatures and urban environments where catch basins withstanding water are widespread Footnote 6Footnote 7. In 2016, the majority of WNV-positive mosquito pools in Ontario were reported in the Golden Horseshoe and urban areas of southwestern and southeastern Ontario Footnote 7. Studies have identified a strong relationship between the number of WNV-positive mosquito pools and the number of confirmed human cases reported each year, highlighting the usefulness of mosquito surveillance in early detection and risk assessment Footnote 6Footnote 8.

While the majority of cases are asymptomatic, or do not seek medical attention due to mild symptoms, a fraction of those infected develop severe outcomes, including neuroinvasive disease Footnote 9Footnote 10. Neuroinvasive disease that can present as meningitis, encephalitis or acute flaccid paralysis are difficult to treat and are associated with high morbidity, mortality and long-term sequelae Footnote 9Footnote 10. Considering that WNV infection can lead to severe illness, and that treatment is only supportive, public health efforts have focused on early detection through mosquito and human surveillance, promotion of preventive measures and increasing awareness Footnote 9. An understanding of WNV epidemiology is therefore necessary to inform such public health efforts.

The objective of this report is to summarize and discuss the epidemiology of WNV illness in Ontario, Canada in 2017, with comparisons to previous years.

During the 2017 surveillance period, there were 36 public health units (PHUs) in Ontario that provided local health services within their jurisdictions Footnote 11. Under the Health Protection and Promotion Act, all PHUs are responsible for case management and reporting of diseases of public health significance in Ontario Footnote 12. PHUs classify and report confirmed and probable WNV illness cases using the provincial surveillance case definitions and disease classifications Footnote 13.

PHUs report WNV illness cases to the province using the web-based integrated Public Health Information System (iPHIS). PHU reports include information on case demographics, exposures, symptoms, hospitalizations and deaths. Details for confirmed and probable cases of WNV illness with episode dates from 2005 to 2017 were extracted from iPHIS. Episode date is an approximation of illness onset, based on the first available date in the following hierarchy: symptom onset, specimen collection, laboratory result or report date.

Descriptive analyses were conducted using SAS 9.3 and Microsoft Excel 2010. Case-level data from iPHIS were used to describe the geographic trends, seasonality, age and sex distributions and clinical outcomes of WNV illness cases in Ontario reported in 2017. To eliminate the skewing effect of the WNV epidemic in 2012, the epidemic year was excluded from historical averages, and four-year historical averages (2013–2016) were used as comparators to 2017 Footnote 6. Provincial incidence rates (2005–2016) and PHU-specific incidence rates (2017) were calculated per 100,000 population per year using provincial and PHU population estimates (2005–2016) and projections (2017) obtained from Statistics Canada via intelliHEALTH Ontario. Given the uncertainties with assigning exposure locations, cases reporting travel outside the province during the incubation period were not excluded from the analyses. ESRI ArcGIS™ v10.3 (ESRI, Redlands, California, United States) was used to map WNV illness incidence rates by PHUs for 2017. Rates were grouped into classes using manual classification methods.

This manuscript reports on routine surveillance activities and not research, and therefore research ethics committee approval was not required. Data are available upon request via Public Health Ontario at http://www.publichealthontario.ca/en/About/Pages/privacy.aspx.

The majority of cases occurred between July and September 2017, with the highest proportion of cases reported in August (57.6%) (Figure 3). The seasonal distribution of cases in 2017 was similar to previous years, peaking in August; however, monthly case counts were more than four times the average of the previous four years for July (observed 19 cases, expected four) and August (observed 91 cases, expected 17).

The number of WNV illness cases reported in Ontario in 2017 was higher than the previous four years. This trend corresponds to trends in WNV-positive mosquito pools identified in Ontario Footnote 14. The seasonality of WNV illness in 2017 was also typical of patterns observed in previous seasons in Ontario and the United States Footnote 2Footnote 15. However, while the distribution of WNV illness in urban areas of Ontario (Toronto, Ottawa, Windsor-Essex County, York Region and Peel Region) is consistent with mosquito surveillance previously conducted in the province, increases in WNV illness cases were also observed in low population, rural PHUs in eastern Ontario Footnote 6Footnote 16. The age and sex distribution of cases reported in 2017 were also similar to previous years, with older age groups and males disproportionately affected. The majority of cases with severe clinical outcomes (neurological complications, hospitalizations and deaths) were also older and mostly male, consistent with previous findings that increasing age and being male are risk factors for severe WNV illness outcomes and long-term sequelae Footnote 15Footnote 17.

Implications and next steps

While the cause of the increase is not immediately clear, there may some contributing factors. Ontario experienced a relatively warmer (above historical average) 2016–2017 winter, followed by average spring and early summer temperatures Footnote 18. The warmer winter temperatures allowed for increased survival of overwintering Culex mosquitoes and an increased number of WNV-positive mosquitoes in the spring and summer to start the transmission cycle Footnote 19Footnote 20. This is consistent with the observation that, while the increase in 2017 was above expected, average temperatures in spring and early summer were not high enough to allow for quicker mosquito development and virus amplification to reach levels similar to 2012 Footnote 20Footnote 21.

In terms of next steps, there are several public health implications. The 2017 surveillance period highlights the important role of robust and comprehensive surveillance data in WNV prevention and control efforts. Given that temperature is a driving factor in mosquito development and virus amplification, monitoring temperature in conjunction with ongoing mosquito and human surveillance is necessary for early detection and to assess the fluctuating risks of WNV transmission. Mosquito surveillance conducted over several years, particularly in the eastern PHUs, is needed to determine if risk levels are changing in this region and in the province. Such surveillance data are essential to informing targeted public health actions, such as increasing awareness and education related to preventive measures and early recognition, particularly in the older portions of the population and those at risk of severe disease.

As with most passive surveillance systems, the true incidence of disease is underreported due to a variety of factors, such as disease awareness, health care seeking behaviours and variations in clinical testing. Therefore, the incidence of WNV illness is likely underestimated, and skewed toward cases with severe clinical symptoms and outcomes. Given that the majority of WNV cases are asymptomatic or have mild symptoms, and are likely not captured by surveillance, estimating the true burden of WNV infections in the province is particularly challenging. The Public Health Agency of Canada has estimated that 18,000–27,000 WNV infections in Canada may have gone unreported or were unrecognized between 2002 and 2013 Footnote 4. As well, the geographic distributions presented in this report are based on the PHU of residence of the case at the time of illness onset and are not necessarily the location of exposure. Exposure locations reported in iPHIS (including travel-related exposure) are not sufficient to determine location of acquisition.

The number of WNV illness cases reported in Ontario has risen in recent years. While variations in vector biology, weather and human activity make predicting the extent and impact of WNV challenging, it is expected that as ambient temperature increases, the number of WNV illness cases in Ontario and Canada may increase. Continued and strengthened mosquito and human surveillance, public health action to increase awareness of preventive measures, and clinical care focused on early recognition and treatment, will all help to mitigate the impact of WNV illness in Canada.