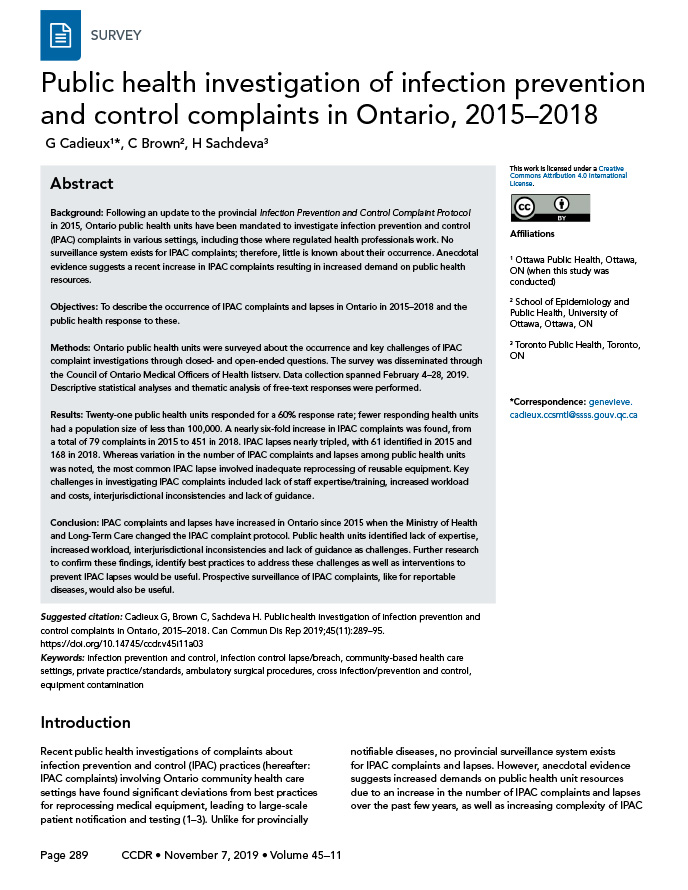 Background: Following an update to the provincial Infection Prevention and Control Complaint Protocol in 2015, Ontario public health units have been mandated to investigate infection prevention and control (IPAC) complaints in various settings, including those where regulated health professionals work. No surveillance system exists for IPAC complaints; therefore, little is known about their occurrence. Anecdotal evidence suggests a recent increase in IPAC complaints resulting in increased demand on public health resources.

Objectives: To describe the occurrence of IPAC complaints and lapses in Ontario in 2015–2018 and the public health response to these.

Methods: Ontario public health units were surveyed about the occurrence and key challenges of IPAC complaint investigations through closed- and open-ended questions. The survey was disseminated through the Council of Ontario Medical Officers of Health listserv. Data collection spanned February 4–28, 2019. Descriptive statistical analyses and thematic analysis of free-text responses were performed.

Results: Twenty-one public health units responded for a 60% response rate; fewer responding health units had a population size of less than 100,000. A nearly six-fold increase in IPAC complaints was found, from a total of 79 complaints in 2015 to 451 in 2018. IPAC lapses nearly tripled, with 61 identified in 2015 and 168 in 2018. Whereas variation in the number of IPAC complaints and lapses among public health units was noted, the most common IPAC lapse involved inadequate reprocessing of reusable equipment. Key challenges in investigating IPAC complaints included lack of staff expertise/training, increased workload and costs, interjurisdictional inconsistencies and lack of guidance.

Conclusion: IPAC complaints and lapses have increased in Ontario since 2015 when the Ministry of Health and Long-Term Care changed the IPAC complaint protocol. Public health units identified lack of expertise, increased workload, interjurisdictional inconsistencies and lack of guidance as challenges. Further research to confirm these findings, identify best practices to address these challenges as well as interventions to prevent IPAC lapses would be useful. Prospective surveillance of IPAC complaints, like for reportable diseases, would also be useful.

Recent public health investigations of complaints about infection prevention and control (IPAC) practices (hereafter: IPAC complaints) involving Ontario community health care settings have found significant deviations from best practices for reprocessing medical equipment, leading to large-scale patient notification and testingFootnote 1Footnote 2Footnote 3. Unlike for provincially notifiable diseases, no provincial surveillance system exists for IPAC complaints and lapses. However, anecdotal evidence suggests increased demands on public health unit resources due to an increase in the number of IPAC complaints and lapses over the past few years, as well as increasing complexity of IPAC investigations (e.g. involving a wide range of health care and personal service settings, and novel procedures and equipment).

The objective of this article is to describe the occurrence of IPAC complaints and lapses in Ontario community settings from 2015–2018 and the public health response to these.

The Infection Prevention and Control Complaint Protocol, 2019Footnote 7 mandates public health units to receive IPAC complaints, assess them and take steps to reduce the risk of infectious disease transmission. Response to a complaint typically involves an inspection by a public health inspector and/or nurse. They use audit tools and other resources from Public Health Ontario (PHO)Footnote 8 and various best practice documents, including from the Provincial Infectious Disease Advisory Committee (PIDAC)Footnote 9Footnote 10, to assess deviations from IPAC best practices. The Infection Prevention and Control Complaint Protocol defines an IPAC lapse as a “failure to follow IPAC practices resulting in a risk of transmission of infectious diseases to clients, attendees or staff through exposure to blood, body fluids, secretions, excretions, mucous membranes, non-intact skin, or contaminated equipment and soiled items”Footnote 7. Only a small portion of IPAC complaints made to public health units turn out to be IPAC lapses; the majority involve deviations from or failure to adhere to IPAC best practices, and, based on a risk assessment, they do not represent sufficient risk of infection transmission to be considered a lapse. PHO is available to support public health units with complex risk assessments.

If the medical officer of health or designate determines that an IPAC lapse occurred, it must be publicly disclosed on the public health unit’s website, as per the Infection Prevention and Control Disclosure ProtocolFootnote 11. If an operator (e.g. person operating a personal service or health care setting) does not cooperate with the IPAC complaint investigation or implement corrective measures within the agreed upon timeframe, action may be taken under the HPPA. For example, if the medical officer of health or a public health inspector is of the opinion that a health hazard exists, a section 13 order may be used to cease a practice or the provision of a service, or close a premises.

A survey about the occurrence of IPAC complaints and lapses in Ontario community settings from 2015–2018 and the public health response to these was conducted to inform discussions during an all-day workshop about “Investigating Infection Prevention and Control Lapses in Regulated Health Settings” held at the Ontario Public Health Conference in March 2019. The study population comprised Ontario’s 35 public health units. The survey was disseminated through the Council of Ontario Medical Officers of Health listserv on February 4, 2019, with reminders on February 12 and 25, 2019. The data collection period ended on February 28, 2019. Respondents needed to have access to their public health unit’s IPAC complaint records to complete the survey. Responses were entered directly into an online CheckMarket® form. Data were then extracted to a Microsoft Excel file (2010; Redmond, Washington, United States). Demographic characteristics of public health units (i.e. population size, population density per square kilometre) based on the 2016 census were obtained from Statistics CanadaFootnote 12.

A descriptive analysis of quantitative data was performed using Microsoft Excel 2010, and open-ended responses were summarized through a thematic analysis. Given that the number of responses was higher for 2018 than for 2015, a sensitivity analysis was performed to assess if the time trends observed were due to missing data. Results from respondents who provided data for all years from 2015–2018 were compared with results from all respondents, including those with missing data.

We are not aware of any other published research describing time trends in IPAC complaints or lapses in community health care or personal service settings in Canada or elsewhere. Data on health care–associated HBV and HCV outbreaks from the Centers for Disease Control and Prevention (CDC) suggest that in health care settings—excluding hospitals—the number of health care–associated HBV outbreaks was highest in 2010 (linked to IPAC lapses in point-of-care glucose monitoring in long-term care settings), and the number of health care–associated HCV outbreaks was highest in 2015 (related to IPAC lapses in outpatient hemodialysis services)Footnote 13. These data, however, only reflect IPAC lapses associated with HBV or HCV outbreaks (i.e. two or more cases) and only in health care settings. The occurrence of IPAC lapses in community health care and personal service settings is likely influenced by several factors, including the increasing complexity and diversity of services provided, the entry on the market of new types of reusable devices requiring reprocessing, and the capacity of regulatory bodies, training programs and service providers to quickly adapt to these changes to ensure the safe provision of services. A possible explanation for the observed increase in IPAC complaints in Ontario is increased awareness and reporting of IPAC issues by clients/patients and employees/service providers; this increased awareness may be related to a few highly mediatized IPAC lapsesFootnote 1Footnote 2Footnote 3.

A strength of this survey was the ability to look at trends in IPAC complaint and lapse occurrence over time. Although the survey instrument underwent validity testing, it did not have a formal reliability assessment. Our survey participation rate was fairly high, but fewer public health units with low population size or very high population density participated; therefore, our findings may not be representative of all Ontario. Another limitation of our study was missing data for some public health units for some years between 2015–2017; however, a sensitivity analysis demonstrated that our finding of an increase in IPAC complaints and lapses over time held true when the analysis was limited to those public health units that provided data for all years. Our survey instrument did not collect data on IPAC complaints involving community health care settings separately from those involving personal service settings. Our survey was limited by the lack of detailed guidance for investigating IPAC complaints; therefore, the data collected through this survey reflects variation in the interpretation and application of Ontario’s Infection Prevention and Control Complaint ProtocolFootnote 7 and Infection Prevention and Control Disclosure ProtocolFootnote 11. Furthermore, our survey is based on IPAC complaints and therefore likely underestimates the true burden of deviations from IPAC best practices and IPAC lapses.

Further research is needed to confirm our findings and to assess whether the increase in IPAC complaints and lapses observed in Ontario is also present in other provinces. Ideally, the occurrence of IPAC complaints and lapses would be routinely monitored through a provincial surveillance system similar to that used for notifiable diseases; such a system would assist public health in fulfilling its health protection mandate and also enable research. Our survey highlights that lack of training/expertise, increased workload, interjurisdictional inconsistencies and lack of clear guidance are important challenges that public health units face when investigating IPAC complaints.

Public health IPAC communities of practice have been set up in Ontario to assist with some of these challenges. In addition, since 2018, a Council of Ontario Medical Officers of Health working group has been examining ways to improve operational consistency for health units investigating IPAC complaints. In that context, we conducted an environmental scan of guidance documents on the public health investigation of IPAC lapses. We found explicit guidance from only two public health jurisdictions. Guidance from Québec was limited to lapses in medical device reprocessing, applicable to hospital settings, and used a quantitative or semi-quantitative risk assessment approachFootnote 14Footnote 15. In contrast, guidance from the CDC was applicable to a broader range of situations and used a qualitative risk assessment approachFootnote 16. (Full scan results available upon request). More research is needed to identify the best methods for IPAC complaint investigation and IPAC lapse management; research findings should inform the development of clear and consistent guidance documents and tools. Research is also needed to identify effective interventions to prevent or reduce the occurrence of IPAC lapses in community settings.

IPAC complaints and lapses have increased in Ontario since 2015. Public health units identified lack of expertise, increased workload, interjurisdictional inconsistencies and lack of guidance as IPAC complaint investigation challenges. Further research to confirm these findings, identify best practices to address these challenges as well as interventions to prevent IPAC lapses would be useful. Prospective surveillance of IPAC complaints, like for reportable diseases, would also be useful.

The authors would like to acknowledge the Ontario public health units that participated in the survey, as well as Public Health Ontario, the Ontario Ministry of Health and Long-Term Care and the Public Health Ontario Laboratory for their support with infection prevention and control complaint and lapse investigations. The authors would also like to thank J Beehler, public health librarian, for her help in conducting the environmental scan, as well as the jurisdictions that participated in the environmental scan.

The authors received salary support from their respective organizations to carry out this work.