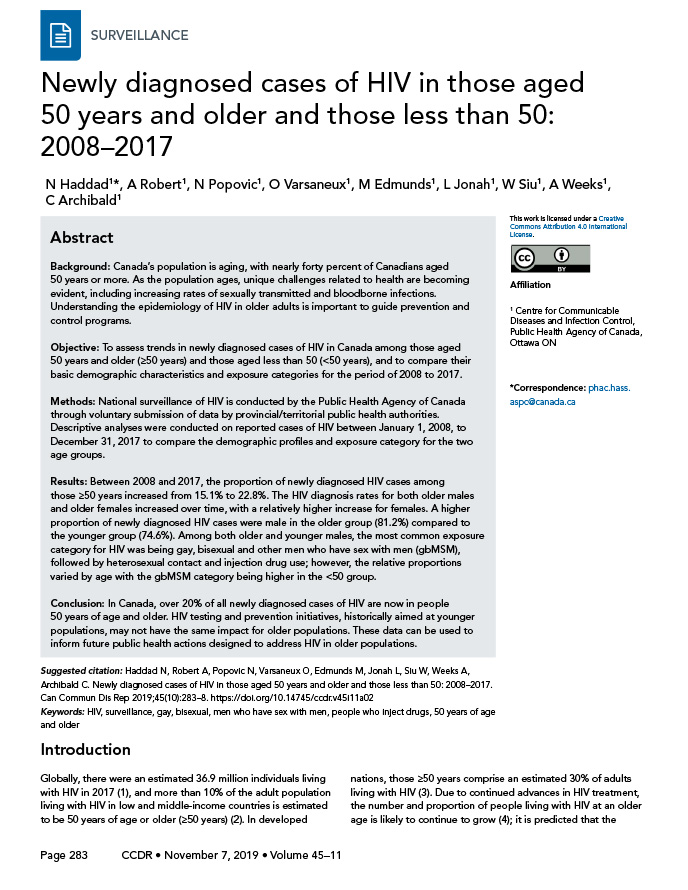 Background: Canada’s population is aging, with nearly forty percent of Canadians aged 50 years or more. As the population ages, unique challenges related to health are becoming evident, including increasing rates of sexually transmitted and bloodborne infections. Understanding the epidemiology of HIV in older adults is important to guide prevention and control programs.

Objective: To assess trends in newly diagnosed cases of HIV in Canada among those aged 50 years and older (≥50 years) and those aged less than 50 (<50 years), and to compare their basic demographic characteristics and exposure categories for the period of 2008 to 2017.

Methods: National surveillance of HIV is conducted by the Public Health Agency of Canada through voluntary submission of data by provincial/territorial public health authorities. Descriptive analyses were conducted on reported cases of HIV between January 1, 2008, to December 31, 2017 to compare the demographic profiles and exposure category for the two age groups.

Results: Between 2008 and 2017, the proportion of newly diagnosed HIV cases among those ≥50 years increased from 15.1% to 22.8%. The HIV diagnosis rates for both older males and older females increased over time, with a relatively higher increase for females. A higher proportion of newly diagnosed HIV cases were male in the older group (81.2%) compared to the younger group (74.6%). Among both older and younger males, the most common exposure category for HIV was being gay, bisexual and other men who have sex with men (gbMSM), followed by heterosexual contact and injection drug use; however, the relative proportions varied by age with the gbMSM category being higher in the <50 group.

Conclusion: In Canada, over 20% of all newly diagnosed cases of HIV are now in people 50 years of age and older. HIV testing and prevention initiatives, historically aimed at younger populations, may not have the same impact for older populations. These data can be used to inform future public health actions designed to address HIV in older populations.

The proportion of Canada’s population aged ≥50 years has increased 12.7% in the past five years and is now nearly 40%Footnote 6. As Canadians grow older (and live longer), they face a number of challenges related to the maintenance and promotion of health. For older Canadians living with HIV, they also live with the possibility of accelerated aging, side effects of prolonged antiretroviral useFootnote 7 and higher rates of non-AIDS-related comorbidities such as diabetes, cancer and cardiovascular diseaseFootnote 4Footnote 8. Thus, the HIV epidemic poses serious concerns in older adults because of physical, mental and psychological issues that accompany both aging and HIV infectionFootnote 9Footnote 10. With aging national and global populations, understanding the epidemiology of HIV in older adults is important to help guide awareness and prevention programs.

The objective of this analysis is to assess trends in newly diagnosed cases of HIV in Canada in populations ≥50 years of age and those younger than 50 years (<50 years), and to compare the basic demographic characteristics and exposure categories of these two populations for the period of 2008 to 2017.

The study used data from the national HIV/AIDS Surveillance System (HASS) maintained by the Public Health Agency of Canada (PHAC)Footnote 11. The HASS is a passive, case-based surveillance system that collates non-nominal data on persons newly diagnosed with HIV in Canada and submitted to PHAC by provincial and territorial public health authorities. Details on the surveillance methods have been described previouslyFootnote 11Footnote 12.

Data on age, sex and exposure categories were analyzed in cases of HIV reported between January 1, 2008 and December 31, 2017. Cases were stratified into two groups: one composed of those ≥50 years at diagnosis; and one composed of those <50 years at diagnosis. The exposure categories used in HIV surveillance are noted in Table 1 and are used in a hierarchyFootnote 11 to reflect the single most likely mode of transmission for HIV even if the case had multiple exposures categories.

Quebec does not submit data on exposure category to PHAC so newly diagnosed cases from Quebec were excluded from analyses involving exposure category. Separate Chi-square tests were conducted to compare the distribution of exposure categories between the older and younger groups for both males and females. All rates were calculated using population denominators from the Annual Demographic Statistics, issued by Statistics CanadaFootnote 13.

Among females, heterosexual contact was the most frequent exposure category was highest in both age groups, but was relatively higher in ≥50 years of age (75.1% versus 63.1%). Conversely, the proportion of cases within the people who inject drugs exposure category was relatively higher in <50 years (29.0% vs 16.0%). Within the heterosexual contact exposure category, the proportion attributed to persons born in HIV-endemic countries was similar for both age categories (25.8% ≥50 years; 28.0% <50 years) (Table 2). The distribution of HIV diagnoses across exposure categories was significantly different between younger and older populations for both males and females (Chi-square test; p<0.0001).

In Canada, over 20% of all newly diagnosed cases of HIV are now in people 50 years of age and older. The number of new HIV diagnoses in the older age group increased by 39.1% from 2008 to 2017; likewise, the rate of new HIV diagnoses over this time also increased. This trend is in contrast to the younger age category, which experienced an overall decrease in both the proportion and rate of new HIV diagnoses over the same period; these changes over time were seen in both males and females, although the relative changes were greater among females. The largest proportion of new diagnoses was reported among the gbMSM exposure category, accounting for almost half of older males and two thirds of younger males.

The increasing trend in HIV diagnoses among older adults has been observed in other countries as well. The 20% incidence falls between the UNAIDS global estimates of 10% (for low and middle-income countries)Footnote 2 and 30% (for developed countries)Footnote 3. In the United Kingdom, the number of new HIV infections decreased over the years; whereas, the number and proportion of new diagnoses in people ≥50 years of age continued to increaseFootnote 14. Comparatively, a recent analysis of data from the European Surveillance System compared older people (aged ≥50 years) to younger people (aged 15–49 years) in 2014 and 2015. The average notification rate of new diagnoses in older adults increased, primarily, in the eastern European Union/European Economic Area countries. The analysis also found that people ≥50 years of age are more likely to acquire HIV via heterosexual contact and to present lateFootnote 15. In contrast, in the United States, HIV diagnoses among people ≥50 years decreased by 7% between 2011 and 2015Footnote 16. This trend was also observed in New York City, where the number of new HIV diagnoses from 2001 to 2017 decreased significantly overall and for those ≥50 yearsFootnote 17.

Increased HIV testing may explain part of the increase in HIV diagnoses in older Canadians. British Columbia saw an overall increase in the rate of HIV testing since 2011, and the testing rates for those ≥50 years increased from 2011 to 2016Footnote 18. A large proportion of new diagnoses were reported among the gbMSM exposure category (almost half for older males and two thirds for younger males), which remains the primary driver of the HIV epidemic in CanadaFootnote 12. In general, the gbMSM population continues to be disproportionately affected by HIV. In Ontario, the percent of tests increased in the gbMSM population from 17.7% in 2007 to 28.6% in 2016Footnote 19. Testing may also include HIV-negative gbMSM, who are at higher risk, since testing is the first step in considering preventative approaches such as preexposure prophylaxisFootnote 20.

In addition to these testing initiatives, there are several other possible reasons for the increasing proportions and rates in those ≥50 years of age, including low rates of condom use among older individualsFootnote 21Footnote 22Footnote 23, a lack of prioritization of HIV prevention efforts in older adultsFootnote 24 and a tendency to a relatively late diagnosis in this populationFootnote 23, enabling forward transmission. In the United States, older people (≥50 years) are more likely to have late-stage HIV infection at the time of diagnosis, and therefore start treatment laterFootnote 16. Older adults are likely to be diagnosed with HIV-related medical disorders later in the course of their illness compared with their younger counterpartsFootnote 25. In Canada, diagnoses of females who are ≥50 years of age have increased since 2008 and heterosexual contact was the most frequently reported exposure category for this age group (as well as for the younger females).

This increase in HIV diagnoses in older females could be partly due to older women being less concerned with the risks of pregnancy and, therefore maybe more likely to engage in unprotected sexFootnote 22Footnote 26Footnote 27Footnote 28. The observed increase in annually reported HIV diagnoses may also be attributed in part to previous positive HIV diagnoses, where a person may be tested and reported as a new diagnosis more than once due to inter-provincial migration or migration into Canada after a HIV diagnosis outside of Canada. However, for the time being it is not possible to assess the impact of previous diagnosis by age group, as this information is not available. The increase of newly diagnosed cases of HIV in adults who are ≥50 years of age has important implications. Older adults have different demographics and risk factors than younger adults, and testing and prevention initiatives, which have historically been aimed at a younger population, may not have the same effectiveness for an older population. Targeting interventions to the distinct characteristics of this older population may be required. PHAC will continue to provide updates on the status of HIV in this population as these data can be used to inform future public health actions designed to address HIV in older populations.

While surveillance data describe the diagnosed portion of the epidemic, national HIV estimates of prevalence and incidence provide an overall picture of the HIV epidemic in Canada, and include people with both diagnosed and undiagnosed HIV infectionFootnote 29. Data on new diagnoses represent only those individuals who have been tested and diagnosed with HIV, and do not represent the full spectrum of all people who are living with HIV. In addition, these data do not provide information on the time that these individuals were infected. The analysis in this study was limited to variables with relatively complete data, such as age, sex and exposure category. Finally, these data may include a subset of individuals who were previously diagnosed with HIV in another province (or country). Other limitations to HASS have been described elsewhereFootnote 12.

In Canada over 20% of all newly diagnosed cases of HIV are now in people 50 years of age and older. National HIV testing and prevention initiatives historically aimed at younger populations may not have the same impact for older populations. These data can be used to inform future public health actions designed to address HIV in older populations.

The Public Health Agency of Canada would like to acknowledge all of the data providers from the provincial and territorial HIV/AIDS programs for their contribution and participation.

Joint United Nations Programme on HIV/AIDS. HIV and aging – A special supplement to the UNAIDS report on the global AIDS epidemic UNAIDS; 2013. https://reliefweb.int/report/world/hiv-and-aging-special-supplement-unaids-report-global-aids-epidemic-2013

Joint United Nations Programmed on HIV/AIDS. Get on the Fast-Track: The life cycle approach to HIV. UNAIDS: 2016. https://www.unaids.org/sites/default/files/media_asset/Get-on-the-Fast-Track_en.pdf