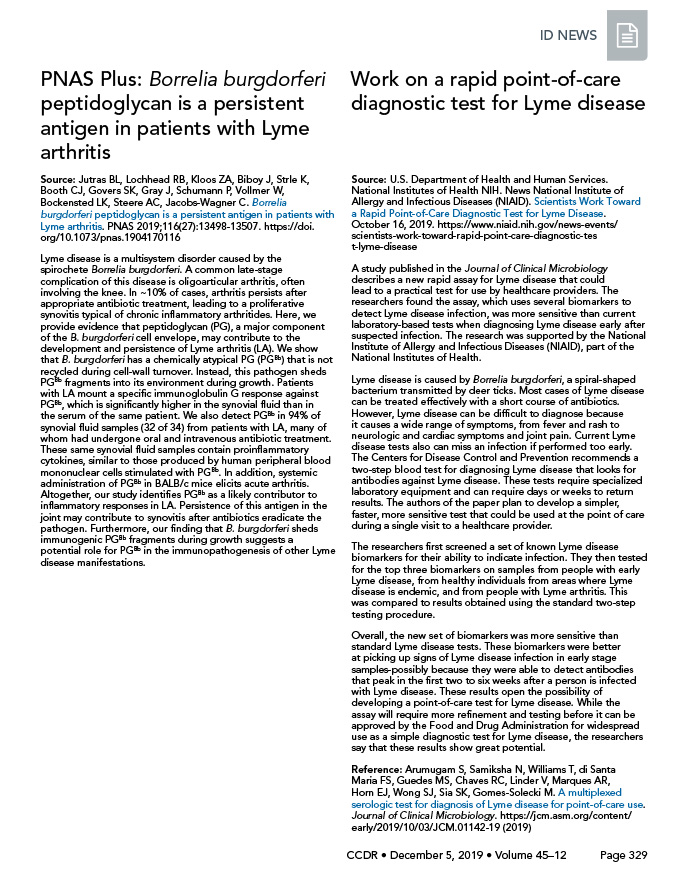 PNAS Plus: Borrelia burgdorferi peptidoglycan is a persistent antigen in patients with Lyme arthritis

Lyme disease is a multisystem disorder caused by the spirochete Borrelia burgdorferi. A common late-stage complication of this disease is oligoarticular arthritis, often involving the knee. In ∼10% of cases, arthritis persists after appropriate antibiotic treatment, leading to a proliferative synovitis typical of chronic inflammatory arthritides. Here, we provide evidence that peptidoglycan (PG), a major component of the B. burgdorferi cell envelope, may contribute to the development and persistence of Lyme arthritis (LA). We show that B. burgdorferi has a chemically atypical PG (PGBb) that is not recycled during cell-wall turnover. Instead, this pathogen sheds PGBb fragments into its environment during growth. Patients with LA mount a specific immunoglobulin G response against PGBb, which is significantly higher in the synovial fluid than in the serum of the same patient. We also detect PGBb in 94% of synovial fluid samples (32 of 34) from patients with LA, many of whom had undergone oral and intravenous antibiotic treatment. These same synovial fluid samples contain proinflammatory cytokines, similar to those produced by human peripheral blood mononuclear cells stimulated with PGBb. In addition, systemic administration of PGBb in BALB/c mice elicits acute arthritis. Altogether, our study identifies PGBb as a likely contributor to inflammatory responses in LA. Persistence of this antigen in the joint may contribute to synovitis after antibiotics eradicate the pathogen. Furthermore, our finding that B. burgdorferi sheds immunogenic PGBb fragments during growth suggests a potential role for PGBb in the immunopathogenesis of other Lyme disease manifestations.

A study published in the Journal of Clinical Microbiology describes a new rapid assay for Lyme disease that could lead to a practical test for use by healthcare providers. The researchers found the assay, which uses several biomarkers to detect Lyme disease infection, was more sensitive than current laboratory-based tests when diagnosing Lyme disease early after suspected infection. The research was supported by the National Institute of Allergy and Infectious Diseases (NIAID), part of the National Institutes of Health.

Lyme disease is caused by Borrelia burgdorferi, a spiral-shaped bacterium transmitted by deer ticks. Most cases of Lyme disease can be treated effectively with a short course of antibiotics. However, Lyme disease can be difficult to diagnose because it causes a wide range of symptoms, from fever and rash to neurologic and cardiac symptoms and joint pain. Current Lyme disease tests also can miss an infection if performed too early. The Centers for Disease Control and Prevention recommends a two-step blood test for diagnosing Lyme disease that looks for antibodies against Lyme disease. These tests require specialized laboratory equipment and can require days or weeks to return results. The authors of the paper plan to develop a simpler, faster, more sensitive test that could be used at the point of care during a single visit to a healthcare provider.

Overall, the new set of biomarkers was more sensitive than standard Lyme disease tests. These biomarkers were better at picking up signs of Lyme disease infection in early stage samples-possibly because they were able to detect antibodies that peak in the first two to six weeks after a person is infected with Lyme disease. These results open the possibility of developing a point-of-care test for Lyme disease. While the assay will require more refinement and testing before it can be approved by the Food and Drug Administration for widespread use as a simple diagnostic test for Lyme disease, the researchers say that these results show great potential.