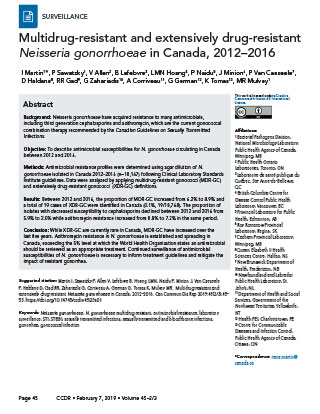 Background: Neisseria gonorrhoeae have acquired resistance to many antimicrobials, including third generation cephalosporins and azithromycin, which are the current gonococcal combination therapy recommended by the Canadian Guidelines on Sexually Transmitted Infections.

Objective: To describe antimicrobial susceptibilities for N. gonorrhoeae circulating in Canada between 2012 and 2016.

Conclusion: While XDR-GC are currently rare in Canada, MDR-GC have increased over the last five years. Azithromycin resistance in N. gonorrhoeae is established and spreading in Canada, exceeding the 5% level at which the World Health Organization states an antimicrobial should be reviewed as an appropriate treatment. Continued surveillance of antimicrobial susceptibilities of N. gonorrhoeae is necessary to inform treatment guidelines and mitigate the impact of resistant gonorrhea.

Gonorrhea is the second most commonly reported sexually transmitted infection in Canada, the causative organism being Neisseria gonorrhoeae. In 2016, 23,708 cases of gonorrhea were reported to the Public Health Agency of Canada (PHAC); rates had increased 87%, from 34.9 cases/100,000 population in 2012 to 65.4 cases/100,000 population in 2016Footnote 1. In 2016, 82% of the total reported cases of gonorrhea in Canada occurred in the 15–39 year age group and the highest rates among males were found among those aged 20–29 years and among females aged 15–24 yearsFootnote 2. Globally, there are an estimated 78 million cases of gonorrhea infection occurring per yearFootnote 3. Treatment is complicated, as N. gonorrhoeae have acquired resistance mechanisms to many of the antimicrobials used for treatment over the yearsFootnote 4. This resistance has been documented by surveillance programs that are used to support appropriate treatment recommendations.

Canadian gonococcal surveillance data from 2012 reported an increase in isolates with decreased susceptibility to cephalosporins, prompting an update to the recommendation for gonorrhea treatment in the Canadian Guidelines on Sexually Transmitted Infections to combination therapy with two antibiotics. In uncomplicated anogenital infections and pharyngeal infections, ceftriaxone 250 mg intramuscularly (IM) plus azithromycin 1 g orally is currently recommended as a first-line treatmentFootnote 6.

PHAC’s National Microbiology Laboratory (NML), in collaboration with the provincial laboratories, has been monitoring the antimicrobial susceptibilities of N. gonorrhoeae since 1985. In this report, we present national-level trends in antimicrobial susceptibilities of N. gonorrhoeae collected from 2012 to 2016, applying the updated MDR-GC and XDR-GC definitions.

Between 2012 and 2016, N. gonorrhoeae cultures were submitted to the NML by provincial laboratories when they identified a resistant (R) isolate or by laboratories that did not conduct antimicrobial susceptibility testing (Table 1). Information regarding the isolates submitted to NML included sex and age of the patient, province/territory where infection was diagnosed, as well as the site of infection. Annually, each province/territory informs the NML of the total number of cultures collected and tested, either in their province/territory or at the NML (Table 1). These totals are used as the denominators in determining the proportions of antimicrobial drug resistance.

A 2 × 2 χ2 test was used to compare proportions of resistance per year to identify significant differences between years (p values calculated with 99% confidence intervals).

Provincial distribution of MDR-GC identified in Canada is represented in Figure 2, with the highest proportion identified in Quebec (67.0%), followed by Ontario (24.9%) in 2016. British Columbia, Alberta, Nova Scotia and Saskatchewan also identified cases of MDR-GC in 2016.

The temporal trends of MDR-GC within each province are displayed in Figure 3, and the provinces with the highest proportions of MDR-GC in 2016 were Quebec (22.7%) followed by Nova Scotia (9.4%) and Ontario (5.8%).

While the proportion of decreased susceptibility to cephalosporins has decreased in Canada, the proportion of azithromycin-resistant isolates has increased to 7.2% in 2016Footnote 5, with the majority identified in Quebec and Ontario. Once antimicrobial resistance is established in a region, there is a high risk of these isolates spreading into neighbouring jurisdictions via social networksFootnote 43. In 2016, the level of resistance exceeded the 5% level at which the World Health Organization recommends reviewing and modifying national guidelines for treatment of sexually transmitted infectionsFootnote 25. Australia reported similar levels of azithromycin resistance (9.3% in 2017)Footnote 44 to Canada; however, the levels in the US (3.6% in 2016)Footnote 37 and the UK (4.7% in 2016 [MIC greater or equal to 1 mg/L])Footnote 45 were lower.

The UK and Australia recently reported treatment failures due to high-level XDR-GC with ceftriaxone (MICs=0.5 mg/L) and high-level azithromycin resistance (MIC greater than or equal to 256 mg/L)Footnote 24. These strains of XDR-GC threaten the success of the current recommended therapy. With the emerging risk of ceftriaxone resistance and the increasing rate of azithromycin resistance, the Canadian Guidelines on Sexually Transmitted Infections has added an alternative combination therapy (gentamicin, 240 mg IM plus azithromycin, 2 g oral) to the list of recommended gonococcal therapiesFootnote 6.

The strength of this study is that it is a national laboratory-based surveillance system that can identify changing trends in gonococci antimicrobial resistance patterns over time. The limitations of this study include the representativeness of isolates collected in a passive surveillance system, which may be biased towards cultures isolated from specific populations seeking treatment at clinics that provide culture diagnostics. This could lead to considerable missing data concerning affected populations. The epidemiological data are limited and there is a lack of data pertaining to risk factors and demographics. In Canada, cultures were only available for approximately 22% of reported cases for this study period and the remaining cases were diagnosed using NAATFootnote 5; for these cases, antimicrobial susceptibilities were unknown. In addition, the provinces collect cultures according to their own provincial guidelines and perform antimicrobial susceptibility testing using various susceptibility-testing methods.

To address the lack of surveillance data in the jurisdictions that have data only from NAAT, the NML developed assays that can be used to predict antimicrobial resistance and sequence type directly from NAAT specimensFootnote 46Footnote 47Footnote 48. While these assays cannot replace culture-based MIC determinations, they can aid in surveillance by predicting antimicrobial susceptibilities to cephalosporin, ciprofloxacin and azithromycin and, together with molecular typing, can provide an understanding of the types of gonorrhea circulating in a community. This work is not routinely performed but is reserved for remote regions where bacterial culturing is not possible.

To address some of the limitations associated with the national passive laboratory surveillance program, PHAC launched the Enhanced Surveillance of Antimicrobial Resistant Gonorrhea in 2013Footnote 49. Laboratory data, such as antimicrobial susceptibility data and sequence typing, are linked to enhanced epidemiological data, which includes demographic and clinical information, risk behaviours, infection site and prescribed treatment informationFootnote 49. This enhanced laboratory-epidemiological linked surveillance program is currently being conducted in several provinces with plans to expand to other jurisdictions. These data will improve the understanding of antimicrobial-resistant N. gonorrhoeae in Canada and provide better evidence to inform the development of treatment guidelines and public health interventions.

Although rates of MDR-GC increased between 2012 and 2016, XDR-GC in Canada is currently rare. The data presented in this report support efforts to limit the spread of antimicrobial-resistant N. gonorrhoeae and prevent the emergence of XDR-GC. In some parts of Canada, azithromycin-resistant GC have exceeded the 5% level at which the World Health Organization recommends reviewing and modifying treatments. Continued surveillance of gonococcal antimicrobial susceptibilities is vital to inform treatment guidelines and mitigate the spread of MDR-GC and XDR-GC.

The authors would like to thank Gary Liu and Norman Barairo for technical support.

Public Health Agency of Canada. Reported cases from 1991 to 2016 in Canada - Notifiable diseases on-line. Ottawa (ON): Government of Canada; 2017. http://diseases.canada.ca/notifiable/charts?c=yl

Bodie M, Gale-Rowe M, Alexandre S, Auguste U, Tomas K, Martin I. There’s no time like the present: prevention and control of the spread of antimicrobial resistant Gonorrhea. Can Commun Dis Rep 2019;45(2/3):54–62.

Public Health Agency of Canada. Report on the Enhanced Surveillance of Antimicrobial-Resistant Gonorrhea – Results from the 2014 Pilot. Ottawa (ON): PHAC; 2018. www.canada.ca/en/public-health/services/publications/diseases-conditions/gonorrhea-2014-pilot-surveillance-antimicrobial-resistant.html