Challenges with a cyclosporiasis outbreak 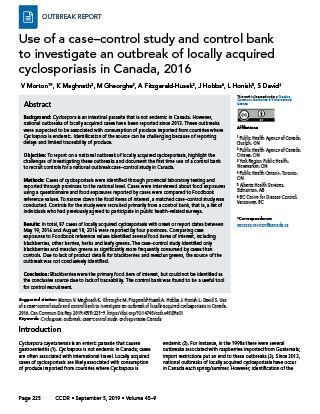 Use of a case–control study and control bank to investigate an outbreak of locally acquired cyclosporiasis in Canada, 2016

Background: Cyclospora is an intestinal parasite that is not endemic in Canada. However, national outbreaks of locally acquired cases have been reported since 2013. These outbreaks were suspected to be associated with consumption of produce imported from countries where Cyclospora is endemic. Identification of the source can be challenging because of reporting delays and limited traceability of produce.

Objective: To report on a national outbreak of locally acquired cyclosporiasis, highlight the challenges of investigating these outbreaks and document the first time use of a control bank to recruit controls for a national outbreak case–control study in Canada.

Methods: Cases of cyclosporiasis were identified through provincial laboratory testing and reported through provinces to the national level. Cases were interviewed about food exposures using a questionnaire and food exposures reported by cases were compared to Foodbook reference values. To narrow down the food items of interest, a matched case–control study was conducted. Controls for the study were recruited primarily from a control bank, that is, a list of individuals who had previously agreed to participate in public health–related surveys.

Results: In total, 87 cases of locally acquired cyclosporiasis with onset or report dates between May 19, 2016 and August 10, 2016 were reported by four provinces. Comparing case exposures to Foodbook reference values identified several food items of interest, including blackberries, other berries, herbs and leafy greens. The case–control study identified only blackberries and mesclun greens as significantly more frequently consumed by cases than controls. Due to lack of product details for blackberries and mesclun greens, the source of the outbreak was not conclusively identified.

Conclusion: Blackberries were the primary food item of interest, but could not be identified as the conclusive source due to lack of traceability. The control bank was found to be a useful tool for control recruitment.

Cyclospora cayetanensis is an enteric parasite that causes gastroenteritisFootnote 1. Cyclospora is not endemic in Canada; cases are often associated with international travel. Locally acquired cases of cyclosporiasis are likely associated with consumption of produce imported from countries where Cyclospora is endemicFootnote 2. For instance, in the 1990s there were several outbreaks associated with raspberries imported from Guatemala; import restrictions put an end to these outbreaksFootnote 3. Since 2013, national outbreaks of locally acquired cyclosporiasis have occur in Canada each spring/summer. However, identification of the source has been difficult because of lack of molecular typing methods, considerable case reporting delays and limited traceability of produce.

An important step in foodborne outbreak investigation is hypothesis generation, and one hypothesis generation technique is to compare food exposures reported by cases to exposures reported by the general populationFootnote 4. In Canada, investigators can use Foodbook reference values for comparisons. Foodbook is a population-based telephone survey that was conducted in all Canadian provinces and territories over a one-year period (2014–2015) with a primary focus of describing what foods Canadians eat over a seven-day period. Case–control studies are also commonly used for hypothesis generation during outbreak investigations. However, they can be lengthy and costly to conduct. One of the challenges associated with these studies is having an effective method to recruit controls. A control bank was created as part of the Foodbook study in order to address this challenge. Participants were asked if they were willing to be contacted for future outbreak investigation or research studies. The use of a control bank to recruit study participants was successfully used in Australia for outbreak investigations and other public health research projects in AustraliaFootnote 5Footnote 6.

An outbreak-associated case of cyclosporiasis was defined as laboratory confirmation of infection with C. cayetanensis in a resident of or visitor to Canada, with symptom onset on or after April 1, 2016, and no history of travel outside of Canada or the United States during the 14 days preceding symptom onset. Cases were identified per provincial diagnosing standards and reported to PHAC by provincial public health officials. Data on food exposures in the 14 days preceding illness onset were obtained using a cyclosporiasis-specific questionnaire. Certain cases were re-interviewed by centralized interviewers at the national or local level if the initial interviews did not obtain the required details on exposures or product. Data were collected on exposure to fresh berries, herbs, leafy greens, peas and other vegetables; only exposure to fresh produce was considered. Exposure frequencies were compared to food reference values from the Foodbook study for the months of May, June, July and August for the affected provinces using binomial probabilities and significance thresholds of p=0.05Footnote 7Footnote 8.

A case–control study was conducted to identify food items associated with illness. Cases were eligible for inclusion in the study if they met the outbreak case definition and had both a reasonably complete questionnaire and a known date of illness onset. Cases also had to have an onset date after May 31, 2016, and the illness had to have been reported on or before September 26, 2016. Controls were matched to each case based on age group (10–19, 20–69 and ≥70 years) and location using the first digit of the postal codeFootnote 9. Controls were asked about food exposures during the same 14-day period as cases. Three controls were selected for each case in order to maximize the statistical power of the results based on the estimated sample size. Controls were recruited using a control bank, a repository of contact information for people who were interviewed for the Foodbook study and who had consented to be contacted for future research or investigative purposes. Additional recruitment, once the control bank was exhausted, was conducted via random digit dialling.

Case–control data were analyzed using McNemar’s odds ratios (ORs) for matched pairs. Factors identified in univariable analysis with ORs greater than one and a p-value of less than 0.2 were included in a multivariable regression model. Factors were removed using backward stepwise selection; variables remained in the model if they changed the significant coefficients by more than 20%Footnote 10Footnote 11.

In total, 87 cases of locally acquired cyclosporiasis were identified in four provinces (Ontario, n=75; Quebec, n=8; Alberta, n=2; British Columbia, n=2). Onset or specimen collection dates ranged from May 19 to August 10, 2016 (Figure 1). One case was excluded from the food history because of the uncertainty around the onset date (reported as “mid-July”) and the long delay between the exposure period and interview (isolation date was September 23, 2016).

Univariate matched analysis indicated that cases were significantly more likely than controls to have been exposed to blackberries (OR = 2.50; 95% confidence intervals [CI] = 1.16–4.91) and mesclun greens (OR = 2.50; 95% CI = 1.01–5.48) (Table 1). Multivariate analysis using backward stepwise selection resulted in only exposure to blackberries being significant, with exposure to mesclun greens and arugula included in the model as statistical confounders.

Based on the results of the case–control study, attempts were made to trace food items that were significantly more likely to have been consumed by cases. Brand information, purchase dates, loyalty card data and store records were used. Import data were requested for blackberries and mesclun greens for May through August 2016; import data for mesclun greens were not available.

The public was notified of the outbreak of locally acquired cyclosporiasis through a Public Health Notice posted on the PHAC website. As no specific product was identified, general prevention recommendations were provided. These recommendations encourage cooking produce imported from countries where Cyclospora is common and consuming fresh produce grown in countries where Cyclospora is not common. People travelling to a country where Cyclospora is found were advised to avoid food that has been washed in local drinking water, to drink water from a safe source and to eat cooked food or fruit that can be peeled.

Although blackberries were not conclusively identified as the source of the outbreak, they were identified as a food item of interest via both the Foodbook reference and the case–control study. In addition, the case–control study helped to strengthen the evidence for blackberries as a suspect source. The reason these findings alone could not prove that blackberries were the source of the outbreak was the lack of specificity on the brand or producer of blackberries consumed by cases. These findings were consistent with previous locally acquired cyclosporiasis outbreaks in Canada in 2014 and 2015 where blackberries were identified as one of multiple suspected sources (Public Health Agency of Canada. Multi-provincial outbreak investigation of Cyclosporiasis in British Columbia, Quebec and Ontario: Final Epidemiological Summary, unpublished report). This finding is also supported by examination of blackberry import data, which revealed that Mexico was a large supplier of blackberries to Canada in May and early June. When taking into account the incubation period of cyclosporiasis (up to 14 days) and the shelf life of blackberries (up to 21 days), illnesses associated with these blackberries could have occurred more than a month after importation, lining up with the peakof the outbreak in JulyFootnote 3Footnote 12. Cyclospora is endemic in Mexico, and cyclosporiasis cases have been reported among Canadians travelling to MexicoFootnote 13. It is probable that one or more additional food items also contributed to this outbreak as only 43% of cases reported blackberry consumption and the percentage of cases who reported consuming blackberries decreased among those who reported later onset dates.

Both the Foodbook comparison and the case–control analysis identified mesclun greens as another item of interest. However, interpretation of this finding was limited by the lack of standardization in the types of greens identified as “mesclun greens” and a lack of packaging or brand details; this precluded positive identification of a specific product.

This outbreak demonstrated the usefulness of a control bank for recruitment of controls for a case–control study. Having a list of persons willing to participate in surveys facilitated rapid and cost-effective initiation of a case–control study. In addition, the response rate for the control bank was much higher than random digit dialling; the decrease in household landline use and the increased availability of call display has made it more difficult to recruit individuals using random digit dialling. However, the use of a control bank introduces the possibility of selection bias as individuals who agree to participate in the control bank may differ from the general population.

One other important limitation to note is that the time periods for the food history for the case–control study data and the Foodbook data differed: Foodbook participants were asked about a seven-day food history, whereas cases in this investigation were asked about exposures over 14 days based on the Cyclospora incubation period. This difference in recall period could have resulted in more food items being reported at higher frequencies by the cases than the reference population from Foodbook.

Case–control studies are a helpful tool in investigation as they can identify a food source that was more likely to have been eaten by cases than by controls; however, additional laboratory and/or traceback information is required to definitively identify the source.

This investigation also highlights the need to revisit strategies for effective investigation of locally acquired cyclosporiasis. Collecting good food exposure data and purchase information from cases at the time of initial case interviewing is important but challenging given the long incubation period and limited shelf life of produce. The lack of routinely available laboratory methods to type Cyclospora is another major investigative challenge. One possible solution would be to focus efforts on identifying and investigating event- or premise-based clusters where cases are more likely to have contracted their illness from one contaminated food product. Further discussion with produce-exporting countries where Cyclospora is endemic might help to address prevention and control measures.

Results from this outbreak investigation have contributed to the understanding of this disease in Canada and demonstrated that a control bank can be an effective tool for conducting case–control studies as part of public health investigations.