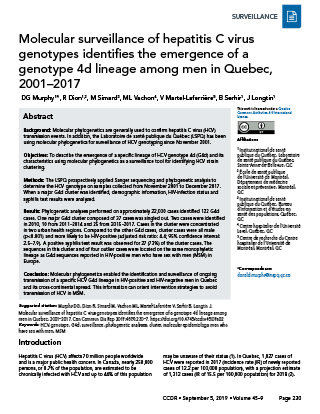 Molecular surveillance of hepatitis C virus genotypes identifies the emergence of a genotype 4d lineage among men in Quebec, 2001–2017

Objectives: To describe the emergence of a specific lineage of HCV genotype 4d (G4d) and its characteristics using molecular phylogenetics as a surveillance tool for identifying HCV strain clustering.

Methods: The LSPQ prospectively applied Sanger sequencing and phylogenetic analysis to determine the HCV genotype on samples collected from November 2001 to December 2017. When a major G4d cluster was identified, demographic information, HIV-infection status and syphilis test results were analyzed.

Results: Phylogenetic analyses performed on approximately 22,000 cases identified 122 G4d cases. One major G4d cluster composed of 37 cases was singled out. Two cases were identified in 2010, 10 from 2011–2014 and 25 from 2015–2017. Cases in the cluster were concentrated in two urban health regions. Compared to the other G4d cases, cluster cases were all male (p<0.001) and more likely to be HIV-positive (adjusted risk ratio: 4.4; 95% confidence interval: 2.5–7.9). A positive syphilis test result was observed for 27 (73%) of the cluster cases. The sequences in this cluster and of four outlier cases were located on the same monophyletic lineage as G4d sequences reported in HIV-positive men who have sex with men (MSM) in Europe.

Conclusion: Molecular phylogenetics enabled the identification and surveillance of ongoing transmission of a specific HCV G4d lineage in HIV-positive and HIV-negative men in Quebec and its cross-continental spread. This information can orient intervention strategies to avoid transmission of HCV in MSM.

Based on prospective cohorts such as SurvUDI network and the Engage study, people who inject drugs and men who have sex with men (MSM) are disproportionally affected by HCV infection compared to the general populationFootnote 2Footnote 3. Chronic HCV infection, if untreated, can result in fibrosis, cirrhosis, liver failure and hepatocellular carcinoma. Early identification of HCV infection followed by treatment is crucial in reducing HCV transmission, associated morbidity and mortality and health care costsFootnote 4.

HCV is mostly transmitted by the parenteral route, the most common risk factors being injection drug use and blood or blood product transfusion (prior to the introduction of blood donor screening). Sexual transmission of HCV is less common, but possible. Recent data indicates an increase in HCV prevalence among MSM, especially among those coinfected with HIVFootnote 5. High-risk behaviours, including unprotected sex, have been identified as determinants for HCV transmission. Ulcerative sexually transmitted infections, such as syphilis, has also been associated with increased risk of HCV acquisition in MSMFootnote 6Footnote 7.

HCV is currently classified into eight genotypesFootnote 8. Genotypes are further divided into subtypes, of which 89 have been confirmedFootnote 8. At the Laboratoire de santé publique du Québec (LSPQ), Institut national de santé publique du Québec, HCV genotyping has been performed routinely since November 2001 for patient management, as genotyping helps to guide antiviral treatment of chronic infection.

Genotyping performed by sequencing analysis not only informs optimal treatment choice, it can also be a powerful molecular surveillance tool for identification of circulating virus strains. Although molecular phylogenetics cannot determine the time of infection acquisition, it can detect transmission clusters. The laboratory can then notify public health authorities that a particular HCV strain is spreading in the populationFootnote 9Footnote 10.

The objective of this article is to describe the use of molecular sequencing and phylogenetics as a tool for prospective surveillance of HCV transmission at the population level. Namely, we show how this approach identified the emergence and ongoing transmission of HCV genotype 4d (G4d) among HIV-positive and HIV-negative men in Quebec and how we were able to identify its source.

In Quebec, HCV genotyping is conducted at the LSPQ. Samples submitted for routine HCV genotyping from November 13, 2001 to December 31, 2017 were included in this study. Samples were submitted from hospital laboratories and public or private clinics in Quebec. Data on the G4d cases originated from the LSPQ’s laboratory information system and included basic demographic information (age, sex, health region of residence), date of specimen collection and test results for HIV and syphilis infections. These were retrieved from the information system using patients’ unique identifier numbers. Data on exposures or risk factors were not collected. Genotype results are not routinely reported to the public health regional authorities.

The HCV genotype of each sample was assessed as it was received. Most samples were received within 30 days of blood collection. Viral ribonucleic acid (RNA) extraction from serum or plasma as well as reverse transcription polymerase chain reaction (RT-PCR), DNA sequencing and genotyping based on nonstructural protein 5B (NS5B) sequences were performed as previously describedFootnote 22. Quebec’s G4d sequences were compared to sequences previously reported in HIV-infected MSM in the Netherlands and FranceFootnote 23Footnote 24Footnote 25. To compare Quebec’s G4d sequences with those reported in the van de Laar et al. studyFootnote 20 for participants from England, France, Germany and the Netherlands, the corresponding NS5B nucleotide sequence was obtained for a subset of Quebec’s G4d isolates by use of reverse primer DM503 (5′-CCACGCTCTCAACGGTGGTAC-3) and forward primer DM101 to generate a 805 base pair sequence fragmentFootnote 22. These were selected on the basis of sample availability. Phylogenies were estimated by the neighbour-joining method according to the maximum composite likelihood model of nucleotide substitution implemented in Molecular Evolutionary Genetic Analysis (MEGA) software version 6Footnote 26. As many as 1,000 bootstrap replicates were performed to evaluate the robustness of the phylogeny. Sequences were considered to be part of a cluster if the following three criteria were met: showed less than 3% nucleotide difference; displayed a bootstrap support value of greater than 70%; and consisted of at least three cases. The closeness of cases in terms of time and space was not included in this definition. G4d sequences for isolates reported in this study were submitted to GenBank and can be retrieved under accession numbers MK950000 to MK950149. NS5B sequences for isolates 3_QC55 (EF116095), 10_QC307 (EF116147), and 27_QC382 (FJ462437) were submitted previously to GenBank.

Descriptive analysis of the data was conducted using Epi Info software version 7.2.2.6Footnote 27 and statistical package SAS version 9.3Footnote 28. This analysis was based on specimen collection dates, grouped as quarterly periods. For univariate analysis, statistical comparisons of categorical variables (age group, sex, health region, G4d HCV cluster and HIV infection status) were performed using bilateral Mantel–Haenszel chi square test and modified Poisson regression with a robust error variance sandwich estimationFootnote 29. To assess their link with cluster A outcome, the multivariate analysis using robust Poisson regression included the following independent variables in the model: HIV infection (yes versus no or unknown) and age group (50 years or older vs younger than 50 years). Given that none of the cluster A cases were female, this analysis was restricted to males. Statistically significant levels for confidence intervals (CI) of risk ratio (RR) estimates and bilateral p values were set at 5%.

Overall, G4 was found in 834 cases. Five G4 cases displayed low levels of viremia and the genotype was determined based on the 5′UTR (5′ untranslated region) sequence, which is too conserved for subtype determination. G4d was found in 122 (14.7%) of 829 G4 cases for which the subtype was available.

The first G4d case was recorded in December 2001 (Figure 1). From 2002 to 2014, an average of six cases per year was observed. In 2015, 16 cases were noted. This increase continued throughout 2016 and 2017. A phylogenetic tree was constructed based on NS5B sequences for the 122 G4d cases and analyzed for strain clustering. Four G4d clusters (named A to D) were identified (Figure 1 and Figure 2). Cluster A comprised 37 cases, clusters B and C each comprised four cases, and cluster D comprised three cases. G4d cluster A cases first appeared in the second quarter of 2010. Cases within each of clusters B, C and D were scattered in time (Figure 1). An increase in cluster A cases was observed from the second quarter of 2015 to the fourth quarter of 2017, for which 24 of 32 (75%) G4d cases were part of this cluster.


Four cases (designated as outliers to cluster A) that localized on the same monophyletic lineage as cluster A cases were also identified. However, these were excluded as they displayed greater than 3% nucleotide differences from cluster A strains (Figure 1 and Figure 2). Outliers to cluster A cases were identified during the same period as cluster A cases. Sequences of cluster A and of the four outliers localized on the same monophyletic lineage as G4d sequences were reported in HIV-positive MSM in England, France, Germany and the Netherlands (Figures A1 and A2 in Appendix 1)Footnote 20Footnote 23Footnote 24Footnote 25.

Demographics and other sexually transmitted infections

In this study, we found that HCV molecular phylogenetics identified the transmission of a specific lineage (cluster A) of HCV G4d among men in Quebec; this would otherwise have remained undocumented. The G4d cluster A strains were found to be concentrated in two urban health regions (X and Y) and localized on the same monophyletic lineage as G4d sequences reported in HIV-positive MSM in England, France, Germany and the NetherlandsFootnote 20Footnote 23Footnote 24Footnote 25 and later in SpainFootnote 30. Although it is likely that this particular G4d cluster A strain was introduced to Canada from Europe, the origin of this strain in Quebec remains unknown.

These findings suggest that high-risk sexual behaviour may be the mode of spread of G4d among the cluster A cases. The international transmission network of this strain in HIV-infected MSM are not injection drug users. There was also a high prevalence of positive treponemal test results. Syphilis is considered as a marker of high-risk sexual behaviourFootnote 31. Ulcerative sexually transmitted infections, such as syphilis, have been associated with increased risk of sexual HCV acquisition in MSMFootnote 6Footnote 7.

Though most cases in cluster A were coinfected with HIV, 27% (10/37) had no laboratory evidence of HIV infection. This indicates likely transmission from HIV-positive to HIV-negative men or vice versa. HCV strain clustering, including G4d, among HIV-positive and HIV-negative MSM has been observed in France and the Netherlands in study participants enrolled in HIV preexposure prophylaxis programsFootnote 24Footnote 33.

The main strength of this study is the high number of HCV-infected cases (about 22,000) for whom uniform sequencing results were available through the study period. An added strength was that the genotyping was performed in the same central reference laboratory. The estimated cumulative number of HCV chronic infections in Quebec reached 42,000 in 2017; nearby 75% can be assumed to be viremicFootnote 2. Thus, the number of individuals included in this study represents a significant proportion of cases who have been diagnosed and are viremic. Nevertheless, G4d cluster A cases are likely to be underestimated as some may not have been diagnosed; in addition, genotyping tests may not have been requested for all cases. Even with this underestimation, the genotyping data was probably unbiased given that it was not directed at specific subgroups of the population.

A limitation of this analysis is that there is no strict definition of strain clustering, as it varies depending on the region of the genome analyzed and the study population. In addition, the rate of HCV evolution can vary over time, based on the individual, and may impact clustering of viral strains. Also, the use of longer HCV sequences could have increased the accuracy of cluster identificationFootnote 34. This study did not include data about determinants, exposures, sexual orientation or epidemiologic links between cases, and could not distinguish the mode of transmission of infection; as such, it can only provide indirect clues of HCV propagation among Quebecois men, most probably MSM.

Molecular phylogenetic-based surveillance revealed an ongoing transmission in Quebec of a specific cluster of HCV G4d. This cluster localized on the same monophyletic lineage as G4d sequences reported in HIV-infected MSM in several countries in Europe, indicating a cross-continental spread of this specific lineage. Phylogenetic analysis results coupled with basic demographic data produces an epidemiologic profile of HCV cases that can orient preventive interventions to avoid HCV transmission among sexually active HIV-positive and HIV-negative MSM.