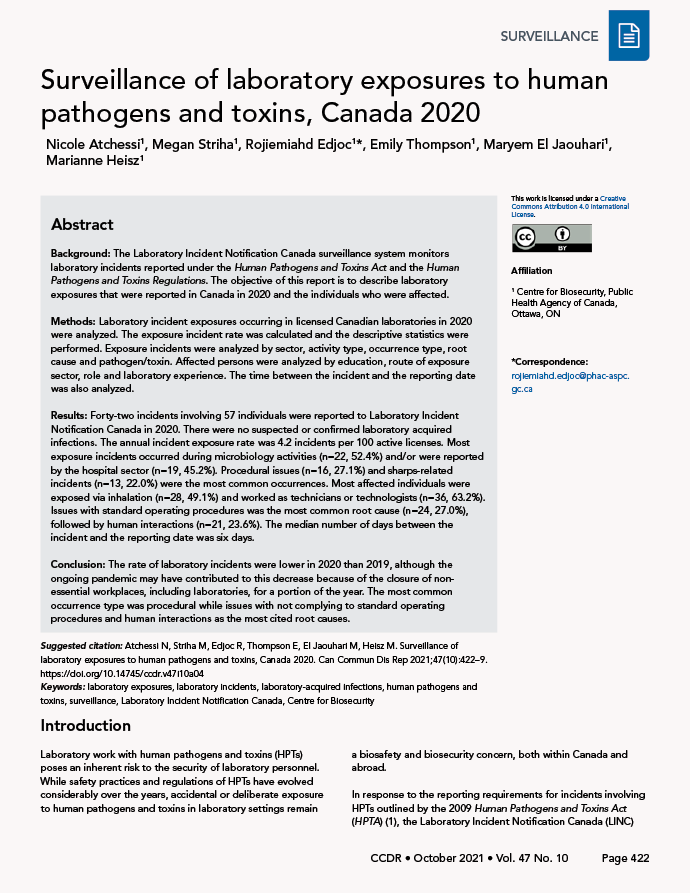 Surveillance of laboratory exposures to human pathogens and toxins, Canada 2020

Results: Forty-two incidents involving 57 individuals were reported to Laboratory Incident Notification Canada in 2020. There were no suspected or confirmed laboratory acquired infections. The annual incident exposure rate was 4.2 incidents per 100 active licenses. Most exposure incidents occurred during microbiology activities (n=22, 52.4%) and/or were reported by the hospital sector (n=19, 45.2%). Procedural issues (n=16, 27.1%) and sharps-related incidents (n=13, 22.0%) were the most common occurrences. Most affected individuals were exposed via inhalation (n=28, 49.1%) and worked as technicians or technologists (n=36, 63.2%). Issues with standard operating procedures was the most common root cause (n=24, 27.0%), followed by human interactions (n=21, 23.6%). The median number of days between the incident and the reporting date was six days.

Conclusion: The rate of laboratory incidents were lower in 2020 than 2019, although the ongoing pandemic may have contributed to this decrease because of the closure of non-essential workplaces, including laboratories, for a portion of the year. The most common occurrence type was procedural while issues with not complying to standard operating procedures and human interactions as the most cited root causes.

In response to the reporting requirements for incidents involving HPTs outlined by the 2009 Human Pathogens and Toxins Act (HPTA)Footnote 1, the Laboratory Incident Notification Canada (LINC) surveillance system was launched in December 2015. The LINC system is unique in that it is one of the first comprehensive national surveillance systems to provide a systematic framework for reporting HPT exposures and laboratory-acquired infections (LAIs) across various settings. A total of 247 exposure incidents have been reported between 2016 and 2019, involving a total of 539 individuals among private, public, hospital, and academic sector laboratoriesFootnote 2Footnote 3Footnote 4Footnote 5. In contrast, national reporting requirements for LAIs among other countries is often voluntary or conducted via retrospective surveyFootnote 6Footnote 7Footnote 8Footnote 9.

The Public Health Agency of Canada's Centre for Biosecurity is mandated to protect the health and safety of the public against risks posed by HPTs through the administration and enforcement of the HPTA and the Human Pathogen and Toxins Regulations (HPTR). Under the HPTA, all Canadian laboratory facilities conducting controlled activities with HPTs are required to obtain a license, unless otherwise exempted. Under the HPTA, all licensed facilities are required to report laboratory incidents involving risk group 2 (RG2) pathogens or above in the following instances:

The 2020 Annual Report marks the fifth year of the program and would normally be the year at which a baseline on incident reporting is established. However, due to the unprecedented response to the severe acute respiratory syndrome coronavirus 2 (SARS-CoV-2) pandemic by the Public Health Agency of Canada and the associated resource re-allocation, the development of a baseline will occur in the 2022 annual report, to be released in 2023.

As with previous years, this annual report aims to describe the distribution of laboratory incidents reported to LINC across years with special attention to exposures, LAIs and factors associated with these exposures at the license (by sector of exposures, HPT, occurrence type) and person (number of affected persons, education, main role, type of activity, years of experience, route of exposure, root causes) level.

The Biosecurity Portal, LINC's external interface, receives notification and follow-up report(s) of laboratory incidents, which are then captured by the internal Customer Relationship Management system. For this report, exposure incidents that took place from January 1, 2020 to December 31, 2020 were extracted from the Customer Relationship Management system. Incidents that did not have a known occurrence date were also included if they were reported during this period. Data of the most recent follow-up reports were used for analysis, while the data of initial reports were used where corresponding follow-up reports and/or data were not present as of the data extraction date, February 8, 2021. Extracted data were cleaned by investigation of any outliers and removal of duplicate entries. It should be noted that while licensed facilities are obligated to report laboratory incidents, the rate of non-reporting is currently unknown and a confounder in this analysis.

Within the scope of the HPTA/HPTR, an exposure incident was defined as a laboratory incident that may have resulted in intoxication/infection or had resulted in suspected or confirmed LAIFootnote 1Footnote 10. A non-exposure incident referred to inadvertent possession or production of an HPT that is a higher RG than the lab is licensed to work with, release of a pathogen or toxin (to which no laboratory personnel are exposed), or a missing, lost or stolen pathogen or toxin or a security-sensitive biological agent not being received within 24 hours of expected arrival.

Data from reports submitted to the LINC surveillance system were extracted to Microsoft Excel 2016 for analysis and R 4.0.2 was used to perform descriptive statistics with cross-validation using SAS EG 7.1. All exposure incidents were first subdivided into ruled out incidents and confirmed incidents, with confirmed and suspected LAIs included in the latter. Reports can be ruled out for a variety of reasons, including if no exposure was found to have occurred, if the exposure involved an RG1 HPT or an HPT in its natural environment such as a primary specimen (neither are mandated by the HPTA and these reports are considered voluntary) or if duplicate reports are received. Affected persons in confirmed incidents were also subdivided into confirmed or ruled out individuals. Among confirmed exposure incidents, the numbers of incidents were analyzed against parameters obtained at two levels of reporting. At the level of the active license holder, the distributions of incidents by sector, main activity, root cause, occurrence type, and implicated pathogen/toxin reported were examined as well as reporting delays. At the level of persons affected in these incidents, the distributions of their highest level of education, years of experience, route of exposure, sector and regular role were examined. Particular attention was given to exposures involving SARS-COV-2 because of its status as an emerging pathogen and its role in the ongoing coronavirus disease 2019 (COVID-19) pandemic.

Microbiology was the most common activity being performed during exposure incidents (n=22, 52.4%), followed by in vivo animal research (n=5, 11.9%). Other activities include cell culture, autopsy/necropsy, maintenance, animal care, molecular investigation, microscopy or other (n=15, 35.7%). Definitions of activities are available in Appendix A1.

Time between the incident and the reporting date

In 2020, 42 laboratory exposures to HPTs had been reported to LINC, a decrease from the 60 reported in 2019. The reports did not include any LAI and were submitted within a median delay of six days. Reports on RG2, non-SSBA agents as well as bacteria were the most common types of HPTs involved in exposure incidents. Neisseria meningitides and lentiviral vector exposures were more common among RG2 HPTs, whereas Blastomyces (Ajellomyces) dermatitidis and SARS-CoV-2 exposures were more common among RG3.

Similar to 2019, exposures were mainly due to procedure breaches and sharps, and occurred mostly in academic and hospital sectors while performing microbiology activities. In total, 57 individuals, predominantly technicians or technologists, were exposed to an HPT. Lack of awareness or compliance with standard operating procedures and human interactions were the main root causes identified.

The reporting of exposure incidents in a laboratory setting through activities involving HPTs in their natural environment is not mandatory under the HPTA. Pathogens and toxins are considered to be in their natural environment if they are collected directly from humans or animals (e.g. blood, serum, tissue, urine, feces, saliva, milk, etc.) or from the environment (e.g. water, soil). Consequently, exposure incidents occurring during diagnostic activities involving SARS-CoV-2 were not systematically reported to LINC and were not included in this report. Four of the 42 exposure incidents reported to LINC involved SARS-CoV-2. These incidents occurred during research activities and were therefore mandatory. Although such reporting was voluntary, laboratory workers are encouraged to report exposure incidents involving HPTs in the HPTs' natural environment. This reporting enables the collection of data at the national level that can be used to detect real-time trends and potential patterns of concern, and to facilitate early responses in order to prevent and/or mitigate biosafety risks.

According to the Notification and Reporting under the HPTA and HPTR Guidelines and the HPTA, notification reports of exposure incidents have to be submitted to LINC without delayFootnote 11. From 2016 to 2019, the median time of submission of exposure incidents decreased from two weeks to four days. Such a decrease maybe explained by the LINC surveillance system actions to facilitate reporting and inform laboratories regarding submission timeliness recommendations. However, in the past year (2020), the median time of report submission increased slightly, from four to six days. This change was possibly attributable to an increase of the workload of laboratories and to disruptions of work caused by the ongoing pandemic. A comparison of time of submission was not done internationally, since exposure reports in other countries were done on a voluntary basis or through surveysFootnote 8Footnote 12Footnote 13.

The main strength of this study is the centralized and mandatory reporting process of laboratory incidents in laboratories across Canada. Further, the LINC allows for an almost real-time identification of causes of incidents and potential areas of improvement that could be addressed in conjunction with laboratories to ensure risks are mitigated in a timely manner. For example, the most exposed individuals were found to be technicians, due to lack of compliance to SOPs. This information could be used by licensed facilities to examine current protocols that are related to SOP compliance to reduce the risk of exposures of laboratory workers in the future. NewslettersFootnote 14 and e-blasts prepared by the LINC team discuss common safety issues and areas for improvement as they arise, which are shared with stakeholders. In addition, there is constant communication between the Centre for Biosecurity and regulated parties. Further follow-up with regulated parties are planned to communicate these results to ensure incidents involving SOP compliance are addressed and adhered to.

There are several limitations of this study. First, non-reporting is a possible confounder in this analysis. The magnitude and significance of non-reporting is currently unmeasured; however, we continually encourage license holders to report laboratory exposure incidents without delay. Second, the exclusion of reports with missing dates from the analysis of the "time to reporting" calculation is another limitation. Given that the proportion of missing values was lower than 10%, the estimation of the median time to reporting likely had only a minor impact. Another limitation is that the number of licenses was used as a proxy of the laboratory workforce for the calculation of the exposure incidence rateFootnote 5. Further, the number of active licenses from December 2020 was unavailable due to the effects of the pandemic. Instead, the number of active licenses for April 2020 was used, as the number of licenses usually fluctuates minimally throughout the year. We will continue to address these limitations through constant communication with stakeholders, by ways of newsletters and e-blasts and biosafety advisories.

The rate of laboratory exposure incidents was lower in 2020 than 2019. The ongoing pandemic may have contributed to this decrease because of the closure of laboratories (and other non-essential workplaces) for a portion of the year. The most common occurrence type was procedural, while issues with non-compliance with SOP and human interactions were the most cited root causes.

Siengsanan-Lamont J, Blacksell SD. A Review of Laboratory-Acquired Infections in the Asia-Pacific: Understanding Risk and the Need for Improved Biosafety for Veterinary and Zoonotic Diseases. Trop Med Infect Dis 2018;3(2):36. https://doi.org/10.3390/tropicalmed3020036

Government of Canada. Canadian Biosafety Standards and Guidelines. Notification and Reporting Under the HPTA and HPTR. Ottawa (ON): Government of Canada; 2017 (accessed 2021-03-10). https://www.canada.ca/en/public-health/services/canadian-biosafety-standards-guidelines/guidance/notification-reporting-human-pathogens-toxins-act-regulations-overview.html