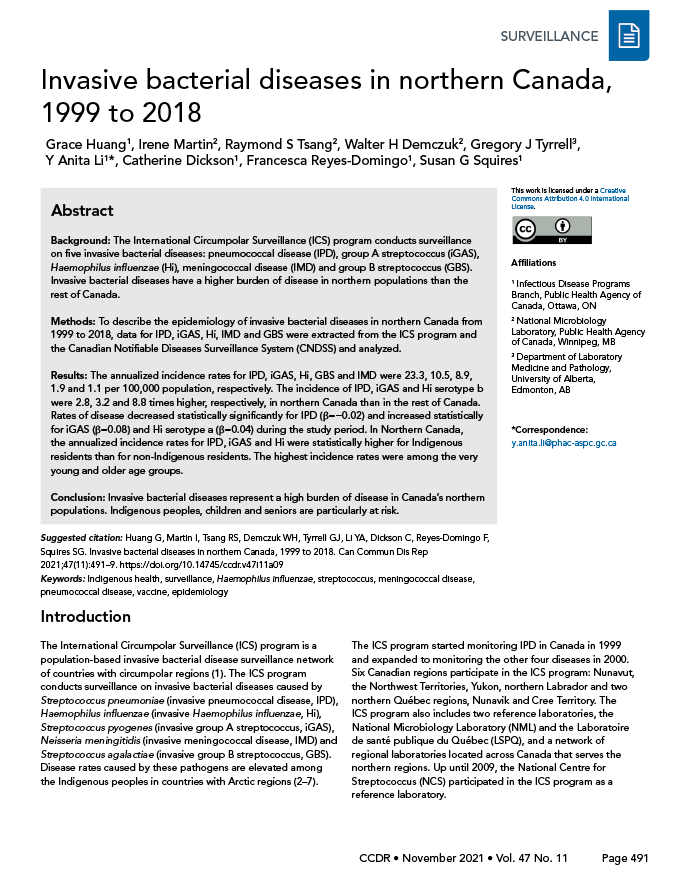 Download this article as a PDF
Published by: The Public Health Agency of Canada
Issue: Volume 47 No. 11, November 2021: Multisystem Inflammatory Syndrome in Children
Date published: November 2021
ISSN: 1481-8531
Subscribe to CCDR

Methods: To describe the epidemiology of invasive bacterial diseases in northern Canada from 1999 to 2018, data for IPD, iGAS, Hi, IMD and GBS were extracted from the ICS program and the Canadian Notifiable Diseases Surveillance System (CNDSS) and analyzed.

Results: The annualized incidence rates for IPD, iGAS, Hi, GBS and IMD were 23.3, 10.5, 8.9, 1.9 and 1.1 per 100,000 population, respectively. The incidence of IPD, iGAS and Hi serotype b were 2.8, 3.2 and 8.8 times higher, respectively, in northern Canada than in the rest of Canada. Rates of disease decreased statistically significantly for IPD (β=−0.02) and increased statistically for iGAS (β=0.08) and Hi serotype a (β=0.04) during the study period. In Northern Canada, the annualized incidence rates for IPD, iGAS and Hi were statistically higher for Indigenous residents than for non-Indigenous residents. The highest incidence rates were among the very young and older age groups.

The ICS program started monitoring IPD in Canada in 1999 and expanded to monitoring the other four diseases in 2000. Six Canadian regions participate in the ICS program: Nunavut, the Northwest Territories, Yukon, northern Labrador and two northern Québec regions, Nunavik and Cree Territory. The ICS program also includes two reference laboratories, the National Microbiology Laboratory (NML) and the Laboratoire de santé publique du Québec (LSPQ), and a network of regional laboratories located across Canada that serves the northern regions. Up until 2009, the National Centre for Streptococcus (NCS) participated in the ICS program as a reference laboratory.

The National Advisory Committee on Immunization (NACI) provides national vaccine recommendations for IPD, HI and IMD; however, adoption of these recommendations are the responsibility of the provincial and territorial jurisdictions. The H. influenzae serotype b (Hib) vaccine, the meningococcal C conjugate (MenC) vaccine for infants and the Men-C-ACYW vaccine for early adolescents have been part of routine childhood immunization programs since 1997, 2007 and 2011, respectivelyFootnote 9. As part of the routine childhood immunization schedule, all six northern regions implemented the 7-valent pneumococcal conjugate vaccine (PCV7) for children younger than two years of age between 2002 and 2007, replacing PCV7 with the 10-valent pneumococcal conjugate vaccine (PCV10) by 2010Footnote 10 and subsequently with the 13-valent pneumococcal conjugate vaccine (PCV13) by 2011 (according to a survey sent to ICS invasive bacterial diseases working group members). In mid-2018, Cree Territory and Nunavik switched to a four-dose PCV10 and PCV13 (3+1) vaccination schedule (personal communication, ICS invasive bacterial diseases working group members, 2019). NACI recommends that the 23-valent pneumococcal polysaccharide vaccine (PPV23) be given to those aged two years or older with high risk of IPD, and adults 65 years and olderFootnote 11. High-risk children and adults include those with certain chronic diseases, immunocompromising conditions or functional or anatomic aspleniaFootnote 11. The Canadian Immunization Guide recommendations for PPV23 have been implemented in all six regions, with minor differences in the age of vaccine administration in some regionsFootnote 11Footnote 12Footnote 13Footnote 14Footnote 15Footnote 16Footnote 17.

The direct method was used to calculate age-standardized rates by multiplying the age-specific rates by the 2011 general Canadian population weightsFootnote 32. Confidence intervals (95% CIs) of age-standardized rates were calculated using the method based on the gamma distributionFootnote 33. Two-tailed Fisher's exact and chi-square tests were used to compare proportions. Poisson and negative binomial regression were used to estimate disease trends. The exact Poisson test was used to compare rates. Statistical significance was set at p<0.05.

Incidence rates for neonatal GBS cases were not calculated because annual live birth estimates for the northern regions were not available for this report. Age-standardized rates by sex for IMD and GBS were not calculated due to small numbers. GBS is not reportable in the province of Québec, and therefore Cree Territory and Nunavik are not included in the analyses.

All ICS regions had implemented the PCV13 vaccine schedule by January 1, 2011. Thirty-four cases that occurred after PCV13 implementation were age-appropriately vaccinated with at least one dose and serotyped. Individuals were age-appropriately vaccinated based on the minimum three-dose national recommendation. Of these 34 cases, three cases (9%) had vaccine-breakthrough disease. Breakthrough disease occurs if the serotype of the case is any of the serotypes covered by the vaccine administered. Two of these cases were serotype 19A and one was serotype 3. Of the 55 PPV23-vaccinated and serotyped cases, 46 cases (84%) had vaccine-breakthrough disease.

Of the 649 cases with information on fatality, 59 were fatal (9.1%).The majority of the fatal cases were 60 years and older (n=24; 41%), followed by those aged 40 to 59 years (n=20; 34%). Individuals in these two age groups had significantly higher risk of fatality than those in younger age groups (case fatality ratio [CFR] =14.2% vs. 4.4%; p<0.0001). The CFR did not vary between Indigenous and non-Indigenous people (9.5% vs. 6.1%; p=0.31). Of the 53 fatal cases with serotype information, 45% were PPV23-specific serotypes not covered by PCV13. The top six reported serotypes were 20, 10A, 15C, 22F, 15A and 3.
When fatality and hospitalization rates were compared for males and females, hospitalization was significantly higher for males (Table 1).
Antimicrobial susceptibility was examined for the IPD isolates with available data (Table 3).

Antimicrobial susceptibility was examined for the iGAS isolates with available data (Table 3).

No significant difference was observed in the hospitalization and fatality rates of males and females (Table 1).

The difference in the average annual incidence rates between those of Indigenous and non-Indigenous origin was not significant (Table 1). Of the 30 cases with information on clinical manifestation, meningitis (n=21; 70%) and bacteremia (n=13; 43%) were most commonly reported and 90% were hospitalized. Of the 30 cases with fatality information, four deaths (CFR: 13%) were reported.

No significant difference was observed in the hospitalization and fatality rates of males and females (Table 1).

No significant difference was observed in the hospitalization and fatality rates between males and females (Table 1).

In this report, we describe the epidemiology of invasive bacterial diseases in northern Canada from 1999 to 2018 and compared the incidence rates there to those in the rest of Canada. The rates of most of the invasive disease remained stable over time with the exception of IPD, which trended down, and iGAS, which trended up over time. The incidence of IPD, iGAS and Hib were 2.8, 3.2 and 8.8 times higher, respectively, in northern Canada than in the rest of the country. The average annual incidence rates for IPD, iGAS and Hi in northern Canada were significantly higher for those who identified as Indigenous than those of non-Indigenous origin. The highest incidence rates were among the very young and older people.

Similar to the Alaskan ICS population (personal communication, T. Zulz, Jan 19, 2021), in northern Canada, IPD presented the highest burden of disease and accounted for over half of the total reported cases during the study period. The incidence of iGAS in northern regions has been increasing, a trend that has also been observed nationally, where the incidence rate has increased three-fold from 2000 to 2018Footnote 34, with outbreaks in the community, military bases and in sheltersFootnote 35Footnote 36Footnote 37Footnote 38. Hia accounted for over 60% of cases and has been increasing significantly over the years. There is also a high prevalence of Hia in the Alaskan population (personal communication, T. Zulz, Jan 19, 2021). According to data collected from the US Active Bacterial Core surveillance sites, between 2002–2008 and 2009–2015, the prevalence of Hia disease increased by 13% annually with an overall increase of 148%Footnote 39.

The burden of disease for IMD and GBS is much lower than the other three diseases, and IMD and GBS rates did not significantly change during the study period. The results also indicate that there was no statistical difference between the age-standardized incidence rates of IMD for the rest of Canada and northern Canada.

The rates of IPD have significantly decreased over the years due to a significant decrease in PCV7 and PCV10-specific vaccine serotypes, indicating that the conjugate vaccine programs have been successful at reducing the circulation of the serotypes these vaccines protect against. There were no significant decreases of PCV13-specific serotypes over the years. Further study is required to monitor the impact of the PCV13 vaccine versus the PCV10 vaccine, especially following the recent switch from the PCV13 vaccine schedule to a mixed PCV10 and PCV13 vaccine schedule in the Québec regions.

Non-vaccine serotypes have significantly increased following the introduction of the conjugate vaccine programs. PPV23-specific serotypes have also increased and the high percentage of breakthrough disease indicates that the PPV23 vaccine is not as effective at preventing disease in the 65-year-and-older ICS population compared to the conjugate vaccines in the younger ICS population.

Rates of Hib have not significantly changed in northern Canada during this study period. No IMD serogroup C cases have been reported since 2010 and this may be due to the implementation of the Men-C-C vaccine in routine childhood vaccine programs by the mid-2000sFootnote 40. Within the last seven years, serogroup B and W have been reported exclusively and the highest burden has been in infants younger than one year.

The ICS program is an important source of epidemiological and laboratory-linked information. It is the only enhanced invasive bacterial disease surveillance system that provides information on ethnicity in Canada, which means that it can be used to monitor the epidemiology of invasive bacterial diseases among the Indigenous peoples of northern Canada.

ICS is a passive surveillance system and some cases may be missed. In some communities, antibiotics may have been started prior to the collection of cultures. Results are unstable due to the small number of cases and small population sizes; therefore, caution should be used when interpreting the results. Because of incomplete reporting of clinical manifestation, vaccine history and underlying conditions and risk factors, these results may be under or overestimated. In addition, not all cases had further serotyping done.

The burden of invasive bacterial diseases is higher in the northern ICS population than the rest of Canada, especially in the Indigenous population. We have limited health information for the large Indigenous population in northern Canada, but existing health disparities need to be monitored and addressed. Ongoing surveillance is needed to continue monitoring disease trends, support prevention and control strategies, and inform immunization recommendations.

Canada's participation in the International Circumpolar surveillance was paid for by the Public Health Agency of Canada.