This article has been peer reviewed.

Approximately 17% of Canadians—3.9 million individuals aged 15 years plus—reported having chronic pain or some discomfort.(1) Chronic pain interferes with quality of life, including the social and family aspects, and with the ability to work.(2) In 2010, the Chronic Pain Association of Canada reported that “the annual cost of chronic pain, including medical expenses, lost income, and lost productivity, but not the social costs, is estimated to exceed $10 billion.”(3)

The prevalence of non-specific chronic pain in the general population is reported to be as high as 55%.(4,5) Canadian studies have also reported a broad range of estimates of prevalence of chronic pain, from 11% to 44%.(1,2,6-13) These studies used time frames ranging from 3 to 6 months(2,6,7,12) or defined pain as usual pain/often troubled with pain;(1,8,13)however, pain definitions with a broader time frame (i.e. usual or persistent pain) reported lower prevalence estimates.(1,8-11,13)Moreover, of all the Canadian reports, only five were large population-based studies(1,9-11,13) and three of these reported on older data from the National Population Health Survey (NPHS) 1996/97 cycle.(9,11,13)

Both Canadian and international prevalence estimates of chronic pain varied by age and sex, with a higher prevalence in females(2,5,6-10,12,14-18) and in the older age group.(2,5,6-11,14,15,17-20) Not all of the Canadian studies that examined the prevalence of chronic pain within gender and age categories are representative of the general population; one study included a participant sample representative of seven counties in southeastern Ontario(12) and another of a city near Toronto.(8) Nevertheless, the available evidence from cross-sectional population-based studies that used older data (from 1996/97) and from smaller studies suggests that in Canada, women and older individuals report chronic pain more often. Although previous studies found that pain interferes with daily activities,(1,2,7,8,10,12,13) no studies have addressed the interference of chronic pain in Canadians over time.

The purpose of our study was to examine the overall prevalence of chronic pain and pain-related interference in Canadians over time, regardless of the factors associated with it. The specific research objectives were to

Our study used data from seven cross-sectional cycles from the Household component of the NPHS (1994/95, 1996/97 and 1998/99) and the Canadian Community Health Survey (CCHS) (2000/01, 2003, 2005 and 2007/08) to document chronic pain in Canada over time. These surveys collect information on participants’ health status, determinants of health and use of health and medical services through structured interviews held in person and by telephone.(21,22)

The NPHS began in 1994 as both a cross-sectional and longitudinal survey; in 2000/01, the cross-sectional component of the NPHS became part of the CCHS, still conducted by Statistics Canada.(21) Both the NPHS and CCHS took place biennially until 2007, when the CCHS became an annual survey, but the combined data for the two years (2007/08) were also released.(23) Both surveys were developed by specialists at Health Canada, Statistics Canada and provincial health ministries as well as academic researchers in relevant fields; advisory and expert committees approved the questionnaires. Further information on the sample design of the NPHS and CCHS is available elsewhere.(21,22)

We included NPHS participants aged 25 years plus and CCHS participants aged 20 years plus. The difference in the age groups is due to the different age categories used in the variation tables provided by Statistics Canada (12–24, 25–44, 45–64 and 65+ years for NPHS; 12–19, 20–29, 30–44, 45–64, and 65+ years for CCHS). Although some of the previous studies included participants as young as 15 years old,(11,14,15,19) we limited age to 20 years and over to avoid combining and comparing adolescents and adults. Two prospective studies(24,25) and one study that used the NPHS data(13) also used data for those aged 25 years plus at baseline; hence we can compare our results with published results.

We defined chronic pain using the following question: “Are you usually free of pain or discomfort?”(26-30,32,33) Participants who responded “no” were considered to have chronic pain. These individuals were then asked how many activities their pain or discomfort prevented, choosing from “none,” “a few,” “some” or “most.”(26-30,32,33) This definition, used in several studies, is thought to be a valid measure of the prevalence of chronic pain in the general population.(9,13)

We analyzed the data for each NPHS and CCHS cycle separately using SPSS version 16.0 (IBM). For each statistical test, the sample was weighted to the Canadian population using the appropriate weighting variable for each cycle.(23,26-31) The Canadian population was described by sex for each cycle using numbers and percentages. Significant differences in the prevalence estimates and measures of prevented activities between groups were identified using 95% confidence intervals (CIs). Sampling weights were applied to all estimates to allow for generalization to the Canadian population. Only groups that included at least 30 sampled participants were reported as indicated in the release guidelines set out by Statistics Canada.(26,29) We compared all numbers reported to the Statistics Canada Sampling Variability Tables to determine if the cell frequency for a given variable was large enough to avoid an individual being identified: if the coefficient of variation was between 0.0 and 16.5, it was acceptable to release; if 16.6 to 33.3, it was considered marginal and numbers were allowed to be released with a caution (in the NPHS, coefficient of variations between 25.1 and 33.3 could only be released with the exact variance); and if greater than 33.3, it could not be released.(26,29) Confidence intervals were obtained using the Sampling Variability Tables. For the CCHS 2003, estimates were obtained using a subsample macro file in the Research Data Centre at Queen’s University and we performed bootstrapping and obtained confidence intervals in STATA: Data Analysis and Statistical Software version 11.0 (StataCorp LP). Bootstrapping allows robust standard error estimates and confidence intervals for a variety of estimates, including means and proportions.(34) We replicated five hundred samples for each analysis to ensure results were not significant due to large sample sizes.

The ratio of men to women was similar across years and between provinces, with a higher ratio of women to men; the reverse was seen in the Yukon, Northwest Territories and Nunavut. The Canadian population to which these results are generalizable (i.e. non-military, non-institutionalized, etc.) increased from 18 836 000 individuals in 1994/95 to 24 639 000 in 2007/08. 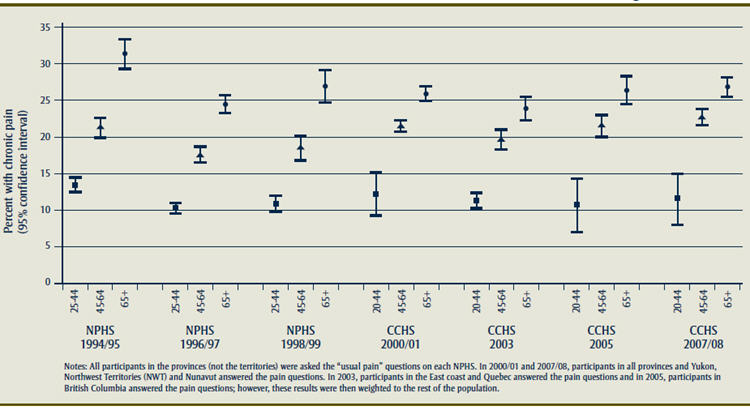 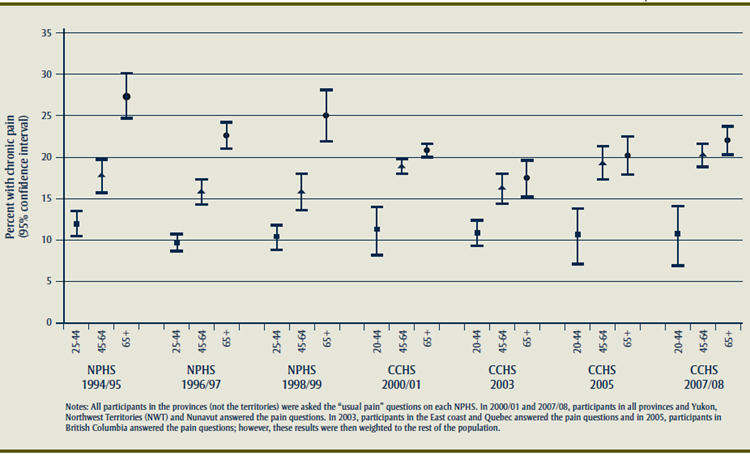 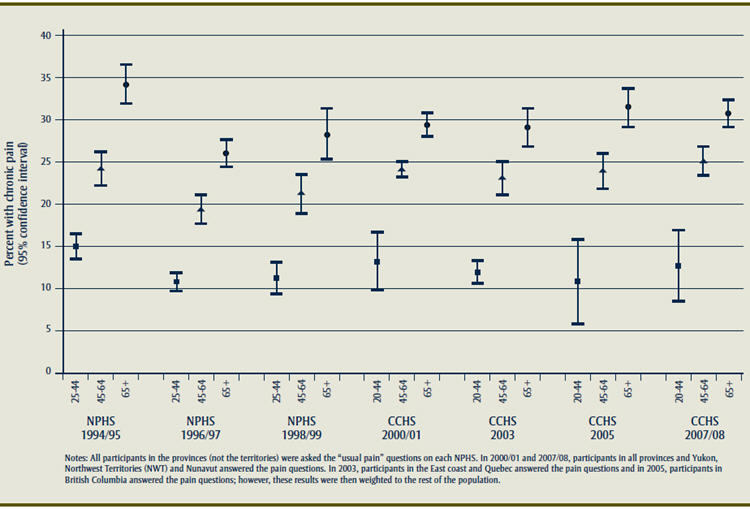 The majority of the population with chronic pain reported interference with activities: 11.4% of the entire population in 1996/97 (95% CI: 10.8–12.0) to 13.3% of the entire population in 2000/01 (95% CI: 13.0–13.6) and 2007/08 (95% CI: 12.8–13.8) reported at least a few prevented activities (Figure 5). Overall, compared to men at each surveyed year, women reported more interference and significantly more pain that prevented a few activities and some activities (Figure 6). Generally, there was no difference between women and men reporting pain that prevented no activities and most activities. Also, there was no statistically significant difference between consecutive years; further, the patterns are similar between prevalence of chronic pain and pain interference over the years. 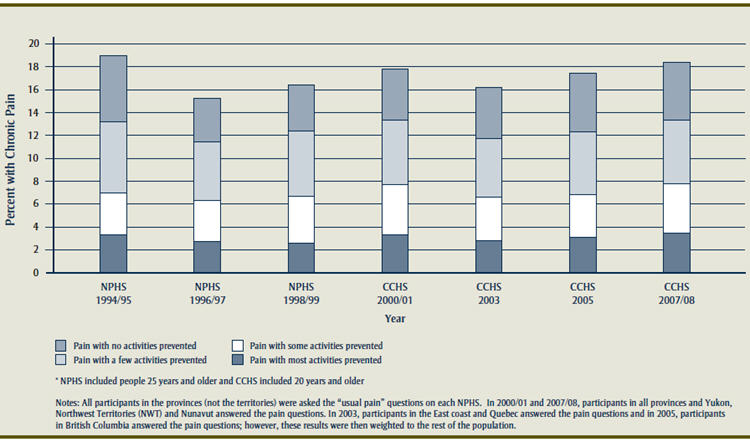 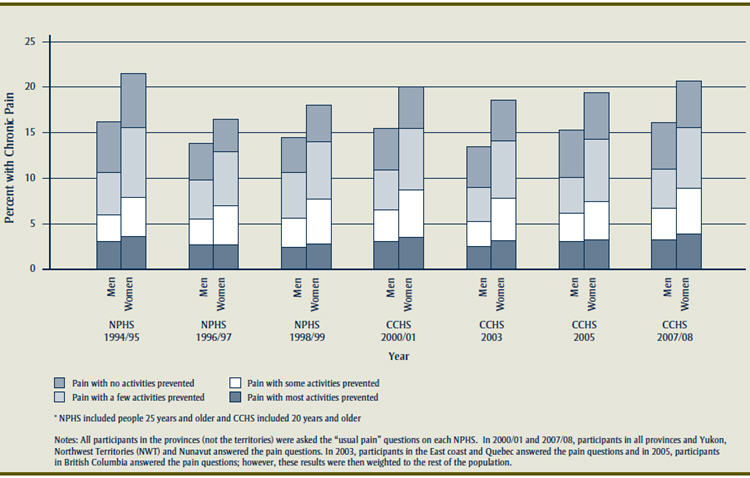 Missing data for the chronic pain variables in each cycle ranged from 0.1% to 0.5%.

This is the first study to examine the prevalence and interference of chronic pain over a 14-year period (1994–2008) in Canadian adults.

Our study reported prevalence estimates (15.1% to 18.9%) that were within earlier Canadian estimates (11% to 44%).(2,6-13) The differences could be attributed to differences in sampling methodology, sample sizes and definitions of chronic pain. Population level studies with large sample sizes (10 000 participants or more) such as ours were more likely to report smaller prevalence estimates (11% to ~21%) than were studies with fewer participants.(1,9-11,13-15,35,36)

Studies using the same or similar definitions as the NPHS and CCHS reported prevalence estimates (11% to 17%) comparable to our findings.(1,8-11,13) Three of these used the 1996/97 NPHS cycle,(9,11,13) with one reporting only chronic non-cancer pain(11) and another reporting all chronic pain;(13) nevertheless, prevalence estimates remained similar. Studies that used a concrete timeframe to define chronic pain (e.g. 3 or 6 months) were more likely to report higher estimates of chronic pain than we found when using a more general timeframe (i.e. usual pain).(2,6,7,12) However, small sample sizes may also have affected the reported prevalence estimates.(2,6,7,12) Further, it was not clear that all reports of estimates of chronic pain were based on a validated measure.(19,25,37) Results from studies not using a validated definition should be interpreted with caution.

One limitation of our study is that we did not control for diseases known to be associated with chronic pain, such as arthritis, and therefore we could not distinguish between condition-re lated pain and chronic pain of unknown origin. This may partially explain the higher reported prevalence of chronic pain in older women who are known to report more chronic pain conditions than do men (e.g. due to fibromyalgia, arthritis/rheumatism, back problems, and migraine headaches).(38)Differences in prevalence estimates worldwide may be true differences, or they may be due to a number of factors, including lifestyle, age distribution, and pain perception and treatment.(36) A longitudinal study is necessary to elucidate factors that increase the risk of chronic pain.

Second, although the NPHS and CCHS household cross-sectional components are representative of most of Canada, they both exclude residents of institutions.(21,22) As a result, the prevalence of chronic pain in the Canadian population may be underreported as nursing homes and other long-term care facilities most likely have many individuals suffering from chronic pain.(39) Third, the pain question does not specify a time frame for “usual pain.” Individuals with other conditions may also be reporting chronic pain. However, our findings are similar to the results reported in a cross-sectional study using 1996/97 NPHS data that controlled for medical and health factors.(11) Moreover, previous studies using general pain definitions reported similar prevalence estimates of chronic pain.(1,8-11,13) The age groups, although similar, are not identical between the NPHS (25 years plus) and CCHS (20 years plus), but results are similar across cycles. Similar age groups were used in the literature, so our results could be compared to those of previous studies.(13,24,25) Finally, recall bias may be an issue due to self-reported questionnaires.

There are substantial strengths to this study. The seven NPHS and CCHS cycles were each based upon a large random sample with minimal missing data. This large random sample supports the generalizability of the findings to the rest of the population (excluding those few areas mentioned above). Further, Van Den Kerkhof et al. compared the Canadian census data to the NPHS 1996/97 data using direct standardization and found the sample to be representative and generalizable to the overall Canadian population.(13) Also, the pain questions are considered to be a valid measure of chronic pain.(9,13,39) Thus these results provide a reliable and accurate estimate of the prevalence of chronic pain and interference in daily activities as a result of pain in the Canadian population.

This study is the first to examine the prevalence of chronic pain over a number of years in Canada; it demonstrated that chronic pain is prevalent in the Canadian population (range: 15.1% to 18.9%), that it is most prevalent among women (range: 16.5% to 21.5%) and the older population (range: 23.9% to 31.3%), and that many of those with chronic pain were prevented from taking part in at least a few activities by this pain (range: 11.4% to 13.3%). Cross-sectional studies do not identify the incidence of a disease or predictors and/or causes of a disease or illness. Therefore, future research includes the need for a longitudinal study to identify the incidence and predictors of chronic pain in Canadians.

Funding was provided by the Freda Paltiel Award for statistics consultation. Funding was also received through the Queen’s Graduate Award.