Half-masting and flag etiquette in times of mourning

Half-masting the National Flag of Canada

Flags are half-masted as a sign of respect and to express a collective sense of sorrow during a time of national mourning. Given that national flags are recognized throughout the world as the ultimate symbols of their respective nations, the act of half-masting is a dramatic visual statement that speaks to the sense of loss that is shared by all their citizens.

They are not mandatory beyond the federal government, and other jurisdictions and organizations may have their own protocols. Individuals may also wish to fly the National Flag at half-mast to express mourning. In all cases, the Government of Canada’s half-masting protocols may serve as guidelines when expressing a collective sense of sorrow during a time of mourning.

As a general rule, when flying the National Flag or any other flag at half-mast, the centre of the flag should be exactly halfway down the flag pole. 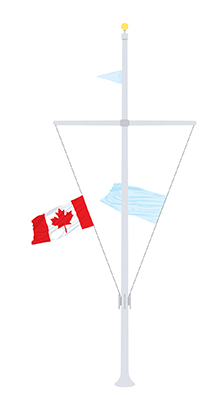 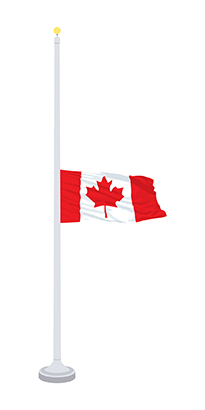 When half-masting a stand of flags, the National Flag of Canada is lowered last. However, if it is possible to lower all flags in the stand at the same time, it is appropriate to do so.

You can find out why the National Flag of Canada is flying at half-mast on Parliament Hill and/or on Government of Canada buildings and establishments by consulting the Canadian Heritage website.

A flag that is flown at half-mast from the Peace Tower to honour the memory of a deceased person will be presented to the next of kin.

Flags flown at half-mast from other federal government buildings may be presented to the next of kin when it is deemed appropriate. These flags should be folded properly, respecting Canadian flag-folding etiquette, and then may be placed in an appropriate flag box or presentation box.

Flags that have been half-masted on the Peace Tower or other government buildings and presented to a deceased person’s next of kin are considered removed from active use and should never again be flown. 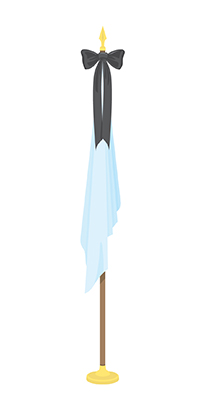 This practice was customary in former times but has faded in modern times. However, it is still acceptable to attach a cravat to a flag on an interior flagpole as a sign of mourning. The flagpole is placed at the entrance of the building (indoors, never outdoors). This allows the organization to visually honour the deceased while complying with the Government of Canada’s policy on flag etiquette.

The flag is draped with a piece of black crepe (ribbon), 2.5 m long, tied in a bow at the base of the finial so that the span of the bow is 30 cm. The ends, cut diagonally, should hang halfway down the sleeve of the flag.

A cravat is never attached to the National Flag of Canada, a Personal Flag of a member of the Royal Family, a Vice-Regal Flag or a Territorial Commissioner’s Flag, nor is it ever attached to an exterior flag. All other flags, such as organizational flags, may have a cravat in sign of mourning when permitted by their respective authority.

Personal Flags in situations of mourning

The Canadian Personal Flags of the members of the Royal Family, the Vice-Regal Flags and the Territorial Commissioner’s Flags are never flown at half-mast.

Upon the death of a serving Governor General, the flag is taken down and subsequently presented to the next of kin by an official designated by the Prime Minister. The same procedure applies for a serving Lieutenant Governor or Commissioner, but the Lieutenant Governor’s Flag would be presented by the Governor General or other designated official, and the Territorial Commissioner’s Flag by a senior official of the federal government.