Collective action from all levels of government, Indigenous Peoples, industry, and civil society is enabling Canada's projected GHG emissions trajectory to bend downwards. In Canada's Second Biennial Report (2016), emissions were projected to increase 12% above 2005 levels by 2030. With the adoption of the Pan-Canadian Framework in 2016, and its measures, Canada's emissions were projected to be 19% below 2005 levels by 2030. This represents the single-largest projected drop in emissions in Canadian history. This trend was strengthened with the release of Canada's strengthened climate plan in December 2020 that showed emissions of 503 Mt, or 31% below 2005 levels in 2030.

Existing and new measures profiled in this 2030 ERP position Canada to achieve the lower-bound of its 2030 target (40%). The 2030 ERP continues to drive down Canada's emissions while growing a clean economy, creating new sustainable jobs, and providing supports to help defray the costs of decarbonization.

Projections for the 2030 Emissions Reduction Plan uses a combination of two modelling approaches – a "bottom-up" approach— as well as a "back-casting" approach. The bottom-up approach provides a floor for projected emissions reduction achievable from existing climate measures, including some new measures contained in the ERP. This accounts for about 470 Mt or 36% below 2005 levels. The 2030 ERP also uses a back-casting approach to help account for policies and measures that are included in the plan, but are still under development (e.g., Canada Green Buildings Strategy, work to develop a Buy Clean Strategy to support and prioritize the use of made-in-Canada low carbon products). Under this approach, Canada's total emissions are capped at the level needed to achieve the 2030 target of 40% below 2005 levels, including the potential contribution from the oil and gas sector, and the Government's model is used to identify potential reductions for the remaining sectors in an economically efficient manner. Many jurisdictions, such as the U.K. and Scotland, use this approach to guide ambition for future climate actions.

Taken together, these approaches provide one potential pathway across economic sectors to meet Canada's 2030 target. However, it does not fully take into account other uncertain factors that could have an impact on the path to the 2030 target, such as labour availability, technology and infrastructure requirements.

Additional actions from provinces, territories, Indigenous Peoples, industry, and the financial sector will also support the achievement of Canada's 2030 emissions reduction target. Further, these projections likely do not fully account for the reality that Canada is just starting along the innovation curves associated with some of the most promising decarbonization technologies, such as industrial electrification, CCUS, and hydrogen, which are expected to experience improvements in cost and technical performance into the future. And finally, the projections may not fully capture the significant investments and economic transformation likely to unfold over the coming decade. For example, the potential reductions for certain investments, such as those in clean technology, that are difficult to fully quantify in advance but are expected to have an impact on future GHG emissions.

Broken down by sector, Canada's pathway to 2030 is based on today's understanding of the potential for each sector to reduce emissions by 2030. Given the economic interdependencies and interactions within and between sectors, the exact areas for emissions reduction potential may shift in the future as Canada further decarbonizes.

Canada's 2030 trajectory is indicative of where there is emissions reduction potential in key sectors to make additional progress. It is important to note that pathways are not sectoral targets, they are projected sectoral contributions: the emissions reductions ultimately contributed by each sector are likely to vary over time as Canada responds to real-world changes, such as other countries implementing their climate plans and changes in global demand for oil and natural gas. 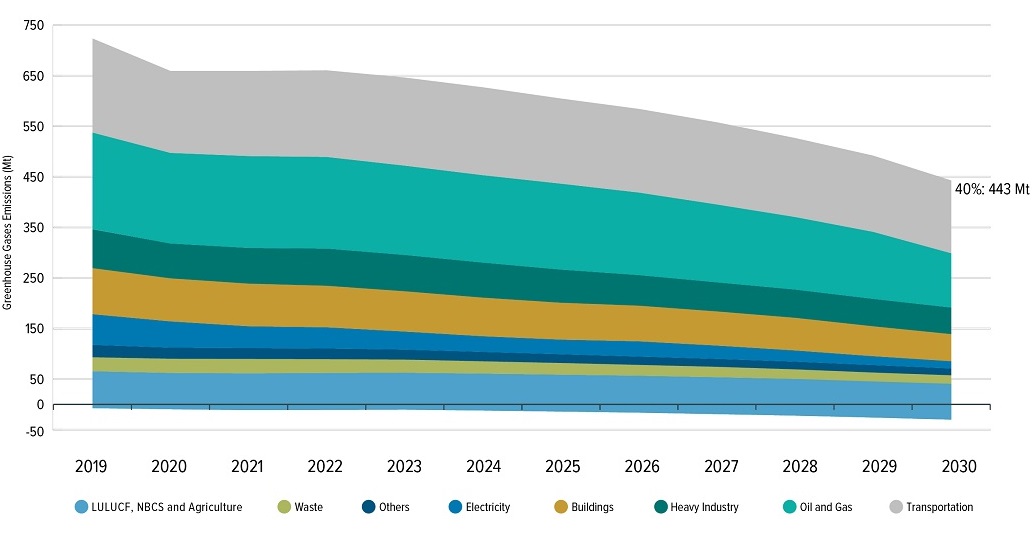 The Canadian Net-Zero Emissions Accountability Act specifies that Canada must establish a 2026 interim GHG objective. Based on Canada's current emissions reduction trajectory, Canada's 2026 interim objective will be 20% below 2005 levels by 2026. This interim objective is not an official target akin to the 2030 NDC, but progress towards achieving this target will be a cornerstone of future progress reports associated with this 2030 ERP in 2023, 2025, and 2027.

It is important to emphasize that the potential reductions presented here for each sector represent only one possible pathway to achieving the 2030 target, using an approach that considers the most economically efficient pathway to achieving Canada's 2030 target by sector, to provide an illustrative understanding of how emissions reductions could be distributed across sectors. While economic efficiency is important, there are other factors that will be key in determining Canada's ultimate trajectory to 2030. For example, technological feasibility, labour availability, and the

2030 Emission Reduction Plan: Canada's Next Steps for Clean Air and a Strong Economy

enabling infrastructure needed to achieve modelled reductions are all considerations that will influence Canada's pathway to 2030 by sector. Despite this caveat, the model is still useful in providing an indicative understanding of how reductions could be distributed across sectors in an economically efficient way.

The following table outlines this notional pathway to 2030, based on the estimated potential for economy-wide and sectoral reductions. These indicative figures are based on the best available information at this time, including emissions data from the 2021 NIR, and are subject to future revision. As additional measures are developed, decarbonization dynamics between sectors evolve, and new data from the 2022 NIR becomes available, these numbers will change. The Government of Canada will continue to refine and update projections through future progress reports, as well as through UNFCCC reporting. The Government will submit Canada's Fifth Biennial Report to the UNFCCC by the December 31, 2022, deadline.

*Totals may not add up due to rounding

Cross-cutting measures are essential to providing policy certainty across the economy. Continuing the stringency and provide more certainty on the carbon pollution price trajectory to 2030, ensuring provincial and territorial carbon pollution pricing systems meet federal benchmark criteria, advancing clean fuels, reducing methane across the economy, and [implementing an advanced and enhanced Low Carbon Economy Fund are all needed.]The Government will also explore approaches to provide greater certainty that the price on carbon will reach at least $170/tonne by 2030.

There is a need to advance Canada's clean technology ecosystem to align with 2030 and 2050 goals, and explore Canada's climate innovation trajectory, through efforts such as regulatory ambition, investments in clean tech deployment, low-carbon procurement, and more. This could be done through actions such as strengthening investments in RD&D for emerging net-zero technologies, and new tax credits for clean tech and zero-emissions technology.

As mitigation measures become more stringent, the need to support workers and communities will become more acute. Efforts such as advancing Just Transition legislation, investing in skills and training, and creating opportunities for under-represented people to join the clean energy workforce are needed. Actions to do so could include launching a Clean Jobs Training Centre and creating a New Futures Fund.

Providing transparency in Canada's pathway to 2030

As noted above, the 2023, 2025, and 2027 Progress Reports will provide regular updates to the projections of GHG emissions towards 2030. This is essential to ensuring that, as factors continue to evolve (e.g., updates to historical emissions data, changes to Federal, Provincial and/or Territorial policies and programs, socio-economic factors such as GDP and population, etc.), Canadians have a clear picture of how Canada intends to meet the 2030 target and whether or not the measures and policy signals outlined in the 2030 ERP will keep the trajectory on-track. To both increase transparency and address the inherent uncertainties in all modelling processes, ECCC will convene an expert-led process to provide independent advice in time for the 2023 Progress Report, enhancing the current robust and reliable modelling regime to inform the basis of future ERPs. This undertaking aligns with advice from the Net-Zero Advisory Body regarding increased transparency in modeling and analytical approaches. In addition, ECCC will continue to publish the National Inventory Report and the GHG air pollutant emissions projections annually, which are both important source of information on Canada's environmental performance.

While existing and new measures profiled in this 2030 ERP position Canada to achieve the lower bound of the 40-45% target by 2030, driving deeper reductions will require accelerated action beyond federal levers. Enhanced climate ambition from provinces and territories, Indigenous Peoples, municipalities, industry, the financial sector, and others can drive further reductions and put Canada in a position to achieve the target's upper bound (45%). These could include:

A reduction in fossil fuel use from electricity generation is a major opportunity for GHG reduction in Indigenous communities across Canada that are located in northern, remote and rural locations where diesel fuel and other emissions-producing products have been the only option for electricity and heating. As communities are supported to switch to cleaner fuels and renewable energy sources, this transition will provide for additional GHG reduction.

Indigenous Peoples are also well placed to support natural climate solutions due to their role as stewards of their traditional territories and Indigenous-led initiatives, such as Guardians and Indigenous Protected and Conserved Areas, will be essential to cultivating nature's ability to store carbon. (See chapter 4.2 for more detail on Indigenous climate leadership).

Through local management of buildings, transportation, water, waste and land-use, municipalities control or influence over 50% of Canada's GHG emissions.Footnote 3 Municipal governments are also closest to citizens and can readily engage households and businesses to reduce GHG emissions. The positive impacts of recent federal investment in municipal climate priorities are clear– such as public transportation projects and zero-emission buses, energy retrofits, net-zero energy buildings, active transportation, and investing in natural infrastructure. There is opportunity to strengthen the Government's partnerships with municipalities, to drive deeper reductions in key sectors, such as buildings and transportation. Additional opportunities for enhanced collaboration can be found in areas such as community energy generation and renewables, reducing methane pollution from municipal landfills and building climate resiliency.

In its report on COP26 and the Glasgow Financial Alliance for Net-Zero, the UNFCCC notes that as the climate warms, corporations, banks, insurers and investors will be forced to realign their businesses models to net-zero to avoid financial risks associated with the transition. This will mean mobilizing private finance to turn billions committed in climate investment through public channels into trillions of total climate investment. This systemic change, and the mobilization of private sector capital that accompanies it, will support deeper GHG emissions reductions in line with the higher end of its 2030 target.

There are many ways that Canadians businesses can reduce emissions and enable Canada to achieve deeper reductions in 2030, such as by using sustainable suppliers, switching company fleets to electric vehicles, and offering carbon credits to customers. Several Canadian businesses have already made net-zero pledges, including Maple Leaf Foods, lululemon, Teck Resources, and more. As Canadians businesses and industry leaders work to reduce emissions from their own operations, Canada will be better positioned to achieve the higher end of its 2030 target.

While public and private decision-makers hold much of the responsibility for meeting Canada's climate objectives, every Canadian has the power to take meaningful climate action. Whether it be taking the bus or subway, biking or walking when possible, purchasing an electric car, or installing an energy-efficient upgrade like a heat pump—individuals can and will make a difference in Canada's ability to meet the higher end of its 2030 goal.

In addition to setting GHG emission targets, municipalities are making sector-specific commitments to reduce energy use, decarbonize transportation, reduce waste and change land-use practices. A deeper federal-municipal partnership will enable municipalities and the Government of Canada to achieve targets and replicate successes across the country. For example: