Treasury Board of Canada Secretariat's Quarterly Financial Report for the Quarter Ended December 31, 2012

This quarterly report has been prepared by management as required by section 65.1 of the Financial Administration Act ( FAA) and in the form and manner prescribed by the Treasury Board (TB). This quarterly report should be read in conjunction with the Main Estimates and Supplementary Estimates A and B as well as Canada’s Economic Action Plan 2012 (Budget 2012) for fiscal year 2012-13.

A summary description of the Treasury Board of Canada Secretariat (TBS) program activities can be found in Part II of the Main Estimates.

This quarterly report has been prepared by management using an expenditure basis of accounting. The accompanying Statement of Authorities includes TBS’ spending authorities granted by Parliament and those used by the department, consistent with the Main Estimates and Supplementary Estimates A and B, for the 2012-13 fiscal year. This quarterly report has been prepared using a special purpose financial reporting framework designed to meet financial information needs with respect to the use of spending authorities.

In fiscal year 2012-13, frozen allotments will be established by Treasury Board authority in departmental votes to prohibit the spending of funds identified as savings in Budget 2012. In future years, the changes to departmental authorities will be implemented through the Annual Reference Level Update, as approved by Treasury Board, and reflected in the subsequent Main Estimates tabled in Parliament.

With the exception of Vote 20, these votes are approved by Parliament for the eventual transfer of funding to government departments once specified criteria are met, and are therefore not reflected in the Statement of Authorities or Planned Spending tables.

TBS also incurs costs under Statutory Authorities, both for departmental and government-wide payments made under legislation approved previously by Parliament, which are not part of the Annual Appropriation Bills. These expenditures mainly reflect the employer’s share of Public Service Pension Plans, the Canada/Quebec Pension Plans, Employment Insurance Premiums and Public Service Death Benefits. These expenditures are initially charged to the accounts of TBS but are eventually attributed to the statutory vote contributions to employee benefit plans of each department and agency, including TBS.

This section highlights the significant items that contributed to the net increase or decrease in resources available for the year and actual expenditures to date for the quarter ended December 31, 2012.

The year-to-date Vote 1 expenditures to December 31, 2012 decreased by approximately $29.5 million or 16 % when compared to year-to-date at quarter end of 2011-12. This is mainly explained by the following factors:

Graph 1 outlines the net budgetary authorities for Vote 1, Program Expenditures, which represents the resources available for use for the year (blue bar) as well as the year-to-date net expenditures (red bar). 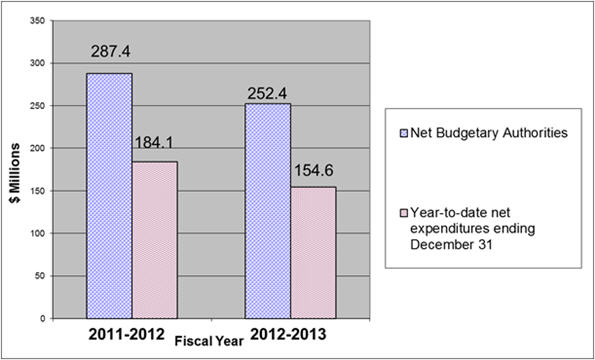 TBS Vote 20 net expenditures have decreased by $52.5 million, or 3.5% when compared to the same period in fiscal year 2011-12. The key elements are attributable to the following:

Graph 2 outlines the net budgetary authorities and expenditures for Vote 20, Public Service Insurance. This represents revenues and expenses related to TB’s role as the employer of the core public administration. 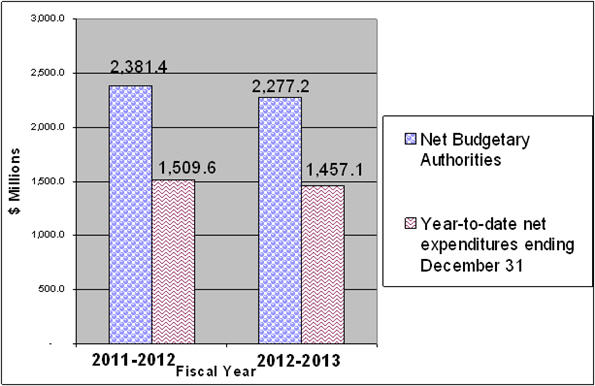 TBS Statutory Authorities expenditures have a large credit balance at the end of the third quarter in both fiscal years. This is due to the timing of flow-through payments to Public Works and Government Services Canada (PWGSC), primarily related to employer contributions made under the Public Service Superannuation Act (PSSA). TBS receives the employer contribution of the pension payments from Government departments and agencies and then transfers them to PWGSC to fund the Public Service Pension Plan. The net effect on TBS financial statements will be zero at year-end in any given fiscal year.

Graph 3: Comparison of Net Budgetary Authorities and Net Expenditures for Statutory Authorities as of December 31, for fiscal years 2011-12 and 2012-13 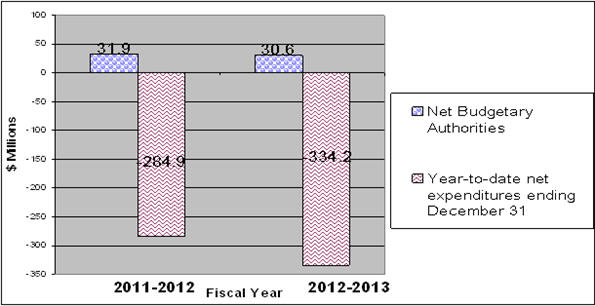 This section elaborates on variances in expenditures for Vote 1, Vote 20 and Statutory Authorities by standard object in order to explain changes in spending trends from the previous fiscal year.

Year-to-date personnel expenditures have decreased by $112.8 million resulting mainly from the following reductions:

Transportation and communications expenditures decreased by $2.2 million mainly due to the transfer of telecommunication costs and equipment to Shared Services Canada.

Professional Services expenditures decreased by $2.2 million, mainly as a result of the completion of time limited initiatives and transfers to Shared Services Canada; offset by a $5.3 million increase mainly due to the changes in timing of payments of administrative fees for the Public Service Dental Plans.

Machinery and equipment expenditures decreased by $1.4 million due to timing differences of payments for software and maintenance renewals which occurred earlier in 2011-12 than in 2012-13, as well as reductions due to the transfer of services and resources to Shared Services Canada.

The Directive on Internal Support Services which came into effect in April 2012, requires Departments to report recoveries as revenue rather than offsetting expenditures as was the case in prior periods. As a result of the directive, Program Expenditures and Vote Netted Revenues have both increased; however, the net effect is zero.

TBS maintains a Corporate Risk Profile which identifies and assesses high-level risks that could affect the achievement of the TBS objectives and priorities. Similar to most organizations, certain risks could have financial impacts, should they materialize. Response strategies have been developed and measures are in place to minimize their likelihood. For example, the Secretariat is strengthening its network security and information management practices to mitigate risks related to the security of data and information.

TBS is addressing reduced flexibility to its operating budget as a result of: the expenditure restraint measures reported in Economic Action Plan 2012 ($7.6 million in 2012-13), the 2010 Strategic Review reported in Budget 2011 ($9.7 million in 2012-13) and savings measures in response to the freeze on operating budgets set out in Budget 2010. TBS is managing the implementation of these measures through proportionally reduced budget allocations to sectors, supported by rigorous monitoring of staffing and expenditures in line with business, financial and human resources planning.

The Public Service Insurance forecast is driven by fluctuations in economic assumptions, including, but not limited to: plan membership, use of plan entitlements and, increases in salaries and provincial tax regulations. TBS continues to closely monitor payment activity and trends.

This section highlights any significant changes which impact the expenditures or approved resources available for the year or have impacted actual expenditures for the quarter ended December 31, 2012.

As a result of the TBS 2010 Strategic Review reported in Budget 2011, TBS found savings totalling $11.5 million, leading to the elimination of 84 positions over three years (see page 230 of Budget 2011), starting in fiscal year 2011-12. Through this review, opportunities were identified to better align activities with core roles and to achieve internal efficiencies. Strategic Communications and Ministerial Affairs have implemented the 2010 Strategic Review decision to eliminate the Regional Communications Network. Savings for fiscal year 2012-13 and ongoing savings have been met.

This section provides an overview of the savings measures announced in Budget 2012 that will be implemented in order to: refocus government and programs, make it easier for Canadians and businesses to deal with their government and, modernize and reduce the back office.

TBS will achieve Budget 2012 savings of $23.6 million by fiscal year 2014-15 through efficiency measures and program reductions that align resources to its core mandate, scaling back where the need is reduced, transforming how it works internally and, consolidating, streamlining and focusing internal business processes.

In the first year of implementation, the Secretariat reference levels will be reduced by approximately $7.6 million. Savings will increase to $15.1 million in 2013-14 and will result in ongoing savings of $23.6 million by 2014-15.

There is a variance of $6.7 million (including EBP) in the Secretariat’s authorities between fiscal years 2011-12 and 2012-13, related to Budget 2012 initiatives. In its role as management board, TBS provides funding to support departments and agencies in meeting government-wide management priorities. When new approaches have been well entrenched, central funding can be reduced or eliminated.

Specifically, savings are achieved in fiscal year 2012-13 by winding down the Internal Audit Human Resource Management Framework ($3.2 million including EBP), and the Financial Interoperability and Stewardship Initiative ($1.6 million), as well as reductions to the Departmental Audit Software Initiative (DASI) ($1.5 million) and other miscellaneous savings ($0.4 million). In addition to the reduction in authorities, expenditures to date have also decreased by approximately $3.1 million. TBS did not incur expenditures in fiscal year 2011-12 for DASI, however, $0.8 million for this initiative was transferred through the supplementary estimates to the departments and agencies who incurred the expenditures.

There were no other significant changes to report this quarter.

Other measures referenced in Budget 2012 include:

No incremental funding was required for TBS to complete the above work.