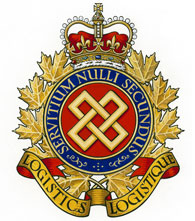 The 34 Service Battalion is a Reserve unit of the Canadian Army. Its primary mandate is to provide the logistical services (supplies, rations, weapon and vehicle maintenance, transportation, resource management, etc.) required to support the combat units of the 34 Canadian Brigade Group, so that they can remain operational and thus accomplish their missions.

The reservists also provide support during emergencies and national disasters and often participate in cultural and social activities in their communities, such as the media’s Christmas charity drive and other local events.

Our team is made up of professionals, students, public servants, tradespeople, businesspeople and academics. Their combined range of experience and expertise contributes to the success of our mission. Many of them are former Regular Force members. We are seeking your uniqueness, know-how and skills because they are vital to our success. Join our winning team and discover your own strengths.

Although 34 Service Battalion was formed quite recently, in 1972, the elements from which it originated have a much longer history. The various units and trades in the Montreal area have a rich past that in some cases goes back as far as 1901.

In 1964, based on the recommendations of the Suttie Commission on the reorganization of the militia, it was decided to bring together all service units, ordnance corps, medical services, the Provost Corps and electrical and mechanical engineering in the Montreal Militia to form two separate service battalions. On 1 January 1965, the 1st Montreal Service Battalion, located on Bélair Street in Montreal, and the 2nd Montreal Service Battalion, located at the armoury on St-Grégoire Street, also in Montreal, were created.

In 1972, because of a shortage of space and growing operational needs, the two units merged and moved to St-Hubert on Montreal’s South Shore. The new unit was initially called the Montreal Service Battalion. In 1975, it adopted its current name, 34 Service Battalion, received its flag during a ceremony at Valcartier, and became affiliated with the Regular Force’s 5 Service Battalion. In 1978, 34 Svc Bn’s medical company became independent, moving to Montreal two years later. In 1979, the City of Montreal granted the Battalion the right to use its crest as part of the unit badge.