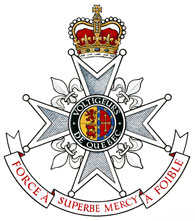 Les Voltigeurs de Québec was founded as a rifle regiment in 1862 and was the first French-Canadian regiment. It now operates as an Army Reserve light infantry unit of the Canadian Armed Forces. The regiment was based at the Quebec City Armoury until the armoury was destroyed in a fire on April 4, 2008. The regiment will return to the armoury in 2018.

The unit is made up of a light infantry company, a service company, a company of recruits and a regimental band. Training is centred on the individual skills of infantry soldiers, from handling weapons to living in the field, administering first aid and conducting offensive and defensive manoeuvres at the section, platoon and company levels.

Les Voltigeurs de Québec is a big family and institution with a long-standing tradition of excellence based on French-Canadian values deeply rooted at the core of its community and with a strong commitment to serving our country and to security and peace around the world.

FORCE A SUPERBE MERCY A FOIBLE

The official history of Les Voltigeurs de Québec can be found at the Directorate of History and Heritage website.