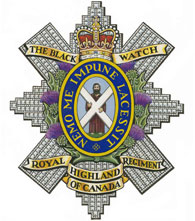 NEMO ME IMPUNE LACESSIT
“No one shall touch me with impunity”

See a list of Canadian Army weapons and vehicles

The Black Watch (Royal Highland Regiment) of Canada, also known as the RHR or the Black Watch, is a Primary Reserve infantry regiment of the Canadian Army. The Black Watch is the oldest highland regiment in Canada. In response to the rise of American military strength during the Civil War, the Canadian government authorized the formation of militia regiments. Six Scottish chieftains in Montreal responded to the government’s call by raising an infantry company for the 5th Battalion. Eventually, eight companies would be raised for border service. Since then, thousands of Canadians have served with the Black Watch. In addition to ensuring border security, they have fought in the Boer War, WWI, WWII and the Korean War, they have bolstered NATO operations in Europe and UN peacekeeping operations worldwide, and they have provided aid to civil authorities, more recently during the ice storm in Quebec and Eastern Ontario.

The official history of the Black Watch (Royal Highlander Regiment) of Canada can be found at the Directorate of History and Heritage website.