The British Columbia Regiment (Duke of Connaught's Own) 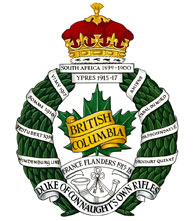 FAUGH A BALLAGH
Clear the Way

The British Columbia Regiment (Duke of Connaught’s Own) is an Army Reserve armoured reconnaissance regiment of 39 Canadian Brigade Group garrisoned in Vancouver, B.C. at The Beatty Street Drill Hall. We are actively recruiting officers and non-commissioned members with technical interests to fill part-time positions.

Today, the regiment continues its tradition of service to Canada through the generation of reserve armoured soldiers that augment Canadian Battle Groups overseas, and support civilian authorities during times of domestic emergency and security.