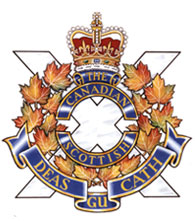 The Canadian Scottish Regiment (Princess Mary's) is a Primary Reserve infantry regiment of the Canadian Army based on Vancouver Island in British Columbia.

As a light infantry regiment the regiment trains in raids, reconnaissance patrolling, ambushes, amphibious operations and airmobile operations. The unit also trains to meet the realities of the "Three Block War" – warfighting, peacekeeping, and humanitarian support.

The Canadian Scottish Regiment is a distinguished infantry regiment dating its roots back to the early 1900's. The regiment bears 42 battle honours, some close to a century old. The unit is proud of its heritage and traditions and of its four members who have received the Victoria Cross (VC), the highest military decoration for bravery and courage.

Soldiers from the Regiment have served in modern day operations with the United Nations and NATO in the Middle East, Cyprus, the Balkans, Africa, Afghanistan, Iraq and Latvia.