The Queen's Own Cameron Highlanders of Canada 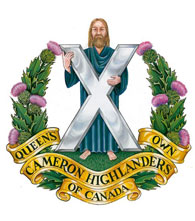 The Queen’s Own Cameron Highlanders of Canada is a reserve dismounted infantry Battalion under 3rd Canadian Division, 38 Canadian Brigade Group, based out of Minto Armoury in Winnipeg, Manitoba.

The Queen’s Own Cameron Highlanders of Canada is a proud unit with a history prior to the First World War and is the oldest highland unit in Western Canada. The primary task of the unit is dismounted infantry, with a mission task of fielding an Influence Activities Company trained to operate across the spectrum of conflict through Civilian-Military Co-Operation (CIMIC) and Psychological Operations (PSYOPS).

The motto for the Queen’s Own Cameron Highlanders of Canada is “Ullamh”, which is Scottish Gaelic for “Ready.”

During the 1970s Camerons served with the Canadian NATO Component in Germany and as Canadian contingents on UN Peacekeeping duties in places such as Egypt, the Golan Heights and Cyprus. In the 1990s soldiers from the regiment participated in OPERATION HARMONY in 1992 in Croatia as well as providing a steady stream of personnel to Regular Force units deploying on other operations.

History: The Queen's Own Cameron Highlander of Canada history.