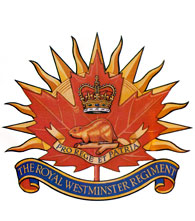 See a list of Canadian Army weapons and vehicles .

The Royal Westminster Regiment is a Primary Reserve light infantry unit of the Canadian Armed Forces. The Regimental Headquarters and A Coy are based in New Westminster, B.C. and D Coy is located in Chilliwack, B.C.

The Regiment can trace its heritage back to the formation of the New Westminster Volunteer Rifle Company in 1863. The Regiment and its perpetuated units served with distinction in the World Wars and it has subsequently contributed to NATO and UN Operations including in the Former Yugoslavia and Afghanistan, and domestic aid to civil power in cases of emergency.

The infantry is the backbone of the Canadian Army, and their role is to “close with and destroy the enemy, by day or by night, in all weather conditions and terrain.” As part of the Primary Reserve, the Regiment augments and supports the Regular Force in whatever capacity needed.

Fast and flexible in combat, light infantry soldiers are capable of performing various operations including airmobile, amphibious, and environmental operations in the Arctic, the mountains, or the desert. Infantry soldiers are highly trained, dependable, and self-disciplined individuals who are able to readily adapt to dynamic situations and environment.