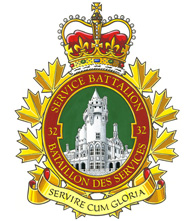 Full-time summer employment is available from May to August.
Unit Administration Night: Tuesday Evenings (by appointment) from 7:30 pm to 10:30 pm

32 Service Battalion is a reserve Canadian Army Combat Service Support (CSS) unit that provides logistics and maintenance support services, primarily to the units of 32 Canadian Brigade Group, as well as other elements of the Canadian Armed Forces. This support includes food services, transportation, supply, administration, vehicle and weapons repair. Compromised of different trades, branches and corps, the unit conducts training in garrison and in the field during selected weekends and evenings to prepare for domestic and international tasks, such as responses to local natural disasters, and overseas deployments. Members have served in Germany, Cyprus, Bosnia, Afghanistan, Kuwait and Ukraine. The Battalion consists of a Headquarters element, 135 Logistics Company and Maintenance Company. Members acquire and maintain proficiency both in fieldcraft and their specific support trades in order to accomplish their mission. Based in Toronto with roots dating back to 1901, the Battalion received its Crest, featuring the landmark Casa Loma in March of 1984.