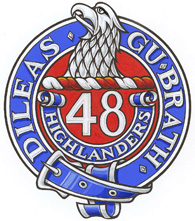 See a list of Canadian Army weapons and vehicles

The 48th Highlanders are a reserve infantry regiment located in the heart of downtown Toronto. The unit was founded in 1891 and has been serving Canadians to the present day. Today the regiment serves in three roles:

Firstly, the 48th Highlanders operates in service to Canadians. This is the unit’s primary role, linking the civilian lives of each of its soldiers and the location of the regiment to communities surrounding it. Under Canada Command tasks or when called out under "Aide to the Civil Power", the 48th Highlanders have served across the breadth and width of our country.

Secondly, the 48th augments the Regular Forces in support of operations outside of Canada. Members have served overseas during the last 100 years and continue to serve around the world today.

In 1891 a group of men gathered in Toronto intent on forming the city's first Highland regiment. The regiment was designated by the Militia Department with the number "48" and the word "Highlanders" and shortly thereafter Lieutenant-Colonel John Irvine Davidson assumed command of the newly constituted 48th Highlanders of Canada.

The Regiment was gazetted on October 16, 1891, and began to drill at Upper Canada College. It first marched out on the 21st of April, 1892, to be greeted by crowds of cheering Torontonians. On the Queen's Birthday that year, the Regiment was presented with its first set of colours by His Excellency Lord Stanley of Preston, the Governor General of Canada.