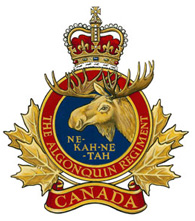 The Algonquin Regiment Army Reserve is a part of 33 Canadian Brigade Group, a Reserve Brigade within the Canadian Armed Forces. The Regiment’s task is to augment Canada’s military by providing trained infantry soldiers. The Regiment is comprised of two companies. A Company is located in North Bay, Ontario, and B Company is located in Timmins, Ontario.

The Algonquin Regiment originated on July 1st, 1900 with the creation of the "97th Regiment of Rifles". The former Algonquin Rifles and today’s The Algonquin Regiment are truly northern Ontario’s Regiment, having been formed from companies spanning locations as far west as its first Headquarters in Sault Ste Marie to as far east as North Bay. Our independent companies can trace their official heritages back to 1863 and the Fenian Raids of 1866.

During our unit’s history, its rugged northern soldiers have answered every call for duty, and their sacrifice to Canada’s conflicts have earned our regiment 28 Battle Honours. Many of our soldiers continue to come from the north’s miners, loggers and hunters.