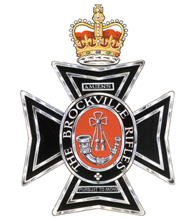 As a Primary Reserve unit, The Brockville Rifles trains part time. The regiment provides individual augmentees to support domestic and international operations conducted by soldiers in support of the Canadian Army missions.

The Canadian Military tradition is essentially that of the citizen soldier – the Militiaman. The development of a substantial Regular Force is a very recent occurrence in the history of the Canadian Nation. A glance at a map will indicate that the City of Brockville, situated in Leeds County, lies along the north shore of the St. Lawrence River. When, at the close of the American War of Independence, the remnants of the Loyalists regiments moved north to British Territory, it was to this area that they came. Among these units were: Roger’s Rangers, Jessop’s Corps and the Kings’ Royal Regiment of New York.