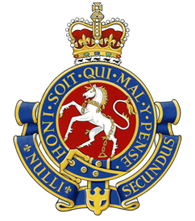 The Governor General's Horse Guards (GGHG) is a reserve regiment of volunteer citizen soldiers whose illustrious history dates from 1822 when Capt. G.T. Denison formed a Troop of Dragoons for a local militia infantry battalion. The Denison family, from the town of Weston, commanded and financed the Troop for many generations. In 1839, the Troop became independent of its parent infantry battalion and was named the Governor General's Body Guard (GGBG) in 1866. George Taylor Denison III expanded the Troop to a Squadron in 1876 and to a Regiment in 1889. Canada's oldest cavalry troop, the Markham (Button's) Troop, formed in 1810, was one of two troops amalgamated into the Body Guard to form the Regiment. Today the Regiment proudly perpetuates the history of Button's Troop that had served so well in General Brock's Army during the War of 1812. The Oak Ridge’s Troop from Richmond Hill, formed in 1853, was the second troop to amalgamate into the Body Guard in 1889 completing the Regiment with its fourth troop.

The Governor General's Body Guard served in most of the major Canadian conflict of the 19th century. Both Denison's Troop and Button's Troop were on active service for close to 400 days during the 1837 Rebellion and re-titled the Queen's Light Dragoons for their good service. Denison's Troop of some sixty volunteers continued to parade during the 1840's and 1850's maintaining an unbroken lineage. In 1866, the Troop mobilized and was deployed for a month to defend Canada from the American Irish Republican Army during the Fenian Raids. The Troop, acting as the advance guard for the British/Canadian column under Col Peacock, was the first to enter and relieve the Town of Fort Erie taking many Fenian prisoners. The GGBG, as a Squadron, served as rear area security in the Riel Rebellion which earned their first battle honour; The Northwest Rebellion 1885. During the Boer War, (1899) the GGBG supplied 51 volunteers to the Canadian Contingent where one of its members, Capt H.Z.C. Cockburn, earned the Victoria Cross and three others Mentioned in Dispatches.

After the Boer War, a new cavalry regiment was formed in Toronto later named the Mississauga Horse. During the First World War, both the Mississauga Horse and the GGBG, supplied thousands of volunteers to the Canadian Expeditionary Force in France. After the war, both Regiments were privileged to perpetuate the elite 4th Canadian Mounted Rifles (4th CMR) history and battle honours. The 4th CMR, raised by the GGBG and Mississauga Horse, were one of the most heavily decorated battalions of the Canadian Army, including a Victoria Cross earned by Pte TW Holmes at Passchendale. In 1936, during a reorganization of the Army, the Mississauga Horse and the GGBG amalgamated to form the Governor General's Horse Guards. The new Regiment activated for overseas duty in 1940, saw action in Italy and subsequently, Northwest Europe, receiving nine battle honours for distinguished performance in World War II.

The Regiment has been serving Canada as a reserve regiment continuously since the Second World War. It was in 1941 that the Regiment lost its horses to become a mechanized regiment of tanks. The Regiment remained a tank unit until 1965 when it was tasked as a light recce regiment in jeeps. The Regiment converted back to an armoured tank regiment with the introduction of the Cougar Armoured Car in 1982. In 1950, the GGHG provided 50 volunteers for duty with the Special Service Force in Korea. Individual volunteers and small groups have served with Canadian NATO contingents in Europe and on UN peacekeeping operations worldwide. In 2004 the Regiment began to augment the regular force with personnel in Afghanistan. A total of 35 soldiers served in that operation over a ten year period earning the Regiment its last battle honour “Afghanistan.” Horse Guards continue to this day to volunteer for service on overseas missions augmenting the Regular Army. The Regiment has assisted the civil authorities during domestic troubles, including Hurricane Hazel in 1954, the Ice Storm in Ottawa in 1998 and the flooding in Quebec in 2017. The Cougar armoured cars were replaced with jeeps in 2005 designating the Regiment as Light Recce once again. The jeeps remain in service to this day, but are augmented with the new Tactical Armoured Patrol Vehicle. This new vehicle puts the Regiment on equal ground with the Regular Army and enhances the Regiments capabilities as armoured soldiers.

The Regiment's long history and prestigious lineage have made the GGHG the senior Reserve Armoured Regiment in Canada. The Regiment received its first standard in 1938, still the only one in the Canadian Forces. The GGHG has received the Freedom of the Cities of Toronto and York and in 1988, Her Majesty Queen Elizabeth II was gazetted as Colonel-In-Chief of the Regiment. All of the Regiment's contributions to Canada, its colourful history and its soldiers have made the Governor General's Horse Guards "Nulli Secundus" - Second to None.