The Irish Regiment of Canada 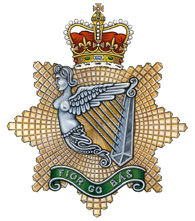 The 2nd Battalion, Irish Regiment of Canada is an infantry regiment in Sudbury.

As the Army’s primary war-fighters and the core of the combat arms team, infantry soldiers are responsible for closing with and destroying the enemy. Supported by the artillery, regiments of armour and the combat engineers, infantry soldiers are capable of operating anywhere in the world in any environment - arctic tundra, mountains, jungle or desert - and in any combination of arms, including airmobile and amphibious operations.

Originally gazetted on 15 October 1918, the 110th Irish Regiment came into existence through the efforts of the Irish Club and the Irish Rifle Club, two Toronto-based organizations, established to promote fellowship among Canadian citizens of Irish ancestry. The 110th Regiment raised personnel for three separate battalions – the 110th Canadian Overseas Battalion, the 180th (Sportsmen’s) Battalion and the 208t8h (Canadian Irish) Battalion. Most of the personnel of the 110th Battalion were used as reinforcements for other battalions of Irish origin. The 180th and 208th Battalions fought as separate units incurring 60 percent casualties but winning nine battle honours.