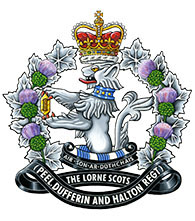 The Lorne Scots is an Infantry Regiment in the Army Reserve with companies in Brampton, Georgetown and Oakville, Ontario.

As the Army’s primary war-fighters and the core of the combat arms team, infantry soldiers are responsible for closing with and destroying the enemy. Supported by the artillery, regiments of armour and the combat engineers, infantry soldiers are capable of operating anywhere in the world in any environment - arctic tundra, mountains, jungle or desert - and in any combination of arms, including airmobile and amphibious operations. The unit also boasts an impressive Pipes and Drums Band who participates in engagements around the world.

The Lorne Scots have been an established institution in Peel, Dufferin and Halton Counties for over 150 years. The Regiment's origin is traced to the 20th Halton and 36th Peel Battalions of Infantry, both raised in September 1866. Early lineage traces back to the War of 1812.

Today the Regiment continues our heritage of defending Canada, soldiers and officers from the Lorne Scots have participated in nearly every engagement Canada has sent troops to, including : Bosnia, Afghanistan, The Philippians, Ukraine, Jordan, Africa and even domestic operation such as the 1998 Ice Storm, the G8/G20 Toronto Conference, Arctic Sovereignty, the 2017 Quebec Floods.

Read more about our history.