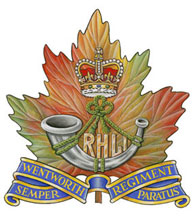 The Royal Hamilton Light Infantry (RHLI) is a reserve unit of 31 Canadian Brigade Group, whose task is to augment Canada’s military with trained infantrymen and influence activities personnel.

The RHLI is looking for dedicated, fit and confident men and women with an interest in challenging training as infantry soldiers. New members in High School or University with time to work one evening a week, one weekend a month, and full-time during the summer are prime candidates. On top of infantry training, members of the RHLI have the opportunity to learn influence activity skills which includes civil-military cooperation and psychological warfare. For those interested in the psychological aspects of war, the RHLI will provide advanced training and multiple opportunities for employment.

Established on December 11th, 1862 as the 13th Battalion Volunteer Militia, The Royal Hamilton Light Infantry (Wentworth Regiment) (RHLI) is the oldest infantry regiment in the Hamilton-Burlington area. The RHLI has been present in every Canadian military campaign and the history of the Regiment reflects the history of the nation it serves. “Rileys”, as they are known, were present at the Battle of Ridgeway during the Fenian Raids, the Red River uprising and the Boer War. In both World Wars, Rileys distinguished themselves, and members also served in Korea. Rileys have also served in the former Republic of Yugoslavia, Kuwait, The Congo, Sierra Leone, Haiti and Afghanistan.

The official history of The Royal Hamilton Light Infantry (Wentworth Regiment) can be found on the Directorate of History and Heritage website.