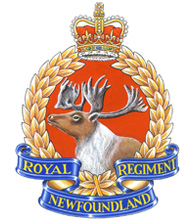 See a list of Canadian Army vehicles and weapons.

The Royal Newfoundland Regiment is one of the oldest Regiments in Canada. It was the only Colonial Regiment to receive the prefix "Royal" during the First World War, and the first in the history of the British Army to receive such an honour during hostilities. The Regiment was also the first Canadian Regiment to receive the Queen’s, and Regimental Colours. It has the distinction of bearing on it’s Regimental Colour the Battle Honour "Gallipoli" which no other Regiment in North America carries.

Newfoundlanders have served their Sovereign on many occasions. The first full-time Regiment to be raised was in 1780. This Regiment lasted until 1783 under the title of H.M. Newfoundland Regiment of Foot. Again in 1795 a Regiment was embodied, entitled The Royal Newfoundland Regiment of Fencible Infantry and played a prominent part during the War of 1812. Covering themselves with glory from such battles as Lundy’s Lane, York (now Toronto), Stoney Creek (now Hamilton), Lake Erie, Michillmackinac, Niagara, Chrysler’s Farm, Ogdensburg, Fort Erie and many others.

On October 24th 1949, almost 30 years after it was disbanded following the First World War, authority was granted by King George VI to remuster The Royal Newfoundland Regiment, as a Militia Unit of the Canadian Forces. Today as Citizen Soldiers the men of the Regiment are proudly and efficiently doing a job of real importance in their community and for the security of the nation by serving on Humanitarian Assistance, Peacekeeping and peace support Operations throughout the world.