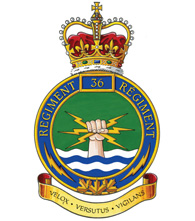 From May to August, full-time summer employment is available.

36 Signal Regiment is an Army Reserve Unit that provides communications training to its members and communications support to other Canadian Army units. Its role is to train combat capable signalers who enable command and control of Canadian Armed Forces units deployed in domestic and expeditionary operations. The regiment works primarily with mobile radio, landline and satellite technologies.

36 Signal Regiment is an amalgamation of 3 communications squadrons from Charlottetown, Halifax and Glace Bay. The new unit when fully manned, will consist of nearly 400 soldiers and officers.

Canadian Army Signals traces its history back to the beginnings of Canada. From 1867 to 1903 there were no formed signal units, but Militia artillery, cavalry and infantry units had internal signalling elements. No Canadian military communications, tactical or strategic, existed above this level.

On 1 April 1903 the Corps of Guides was authorized. The Corps was virtually part of the General Staff responsible for field security and some aspects of military intelligence. Eventually 12 companies of cyclists were formed, units numbered one to 13 (9 was excluded as there was no Military District Number 9). In 1919 a Cable Censorship Section, Corps Reserve was added to the establishment. On 31 March 1929 the Corps was disbanded and personnel were absorbed into the Canadian Corps of Signals.

On 1 July 1903 the Canadian Engineer Corps (CE) was formed as a "Permanent" Corps" and, as part of its many duties, was assigned responsibility for all communications above unit level. The non-permanent engineer corps then acquired sole title to the name "Canadian Engineers". In 1913 brigade level signals were assigned to the Canadian Signal Corps while Division and higher remained with CE. During World War I most division and higher level signal units were actually engineer signal units (except for 1 Canadian Divisional Signal Company which was formed as a mixed corps unit). CE lost its communications role in 1920 when all responsibility for signalling was assigned to the Canadian Signal Corps.

Major Wallace Bruce Matthews Carruthers established the corps in 1903, making it the first independent Signal Corps in the British Empire. King George V bestowed on the permanent force portion of the organization the right to use the prefix royal before its name. Thus the Canadian Signalling Corps became the Royal Canadian Corps of Signals while the militia component was redesignated the Canadian Corps of Signals on 1 Aug 1921. When the Canadian Army, Royal Canadian Air Force and Royal Canadian Navy were unified in 1968 to form the Canadian Forces, the RCCS was absorbed into the C&E Branch. However, on 19 Apr 2013, the Minister of National Defence announced that the historical designation of the corps would be restored to the Army component of the C&E Branch.

36 Signal Regiment has its roots going back to 1904 during the early years of military communications in Canada. Some of the unit names that came and went over time include: No. 6 Signal Company (Halifax), No 5 Fortress Signals Company (Glace Bay), No. 8 Signal Company (Charlottetown), East Coast Signal Regiment (Halifax), and 72 Communication Group. Though the names and command structures changed, the basic job stayed the same: using radios and landline to keep the line of communication open. The modern unit adds satellite technology, advanced cryptography and advanced tactical radio systems to ensure reliable communications under extreme conditions.