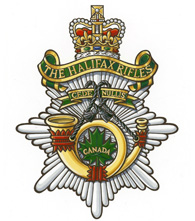 CEDE NULLIS
Yield to None

The mission task for our unit is: Influence Activities – A Squadron of up to 52 members, which is trained in the employment of population group influence techniques, including Psychological Operations and Civil-Military Cooperation, to provide behavioural and psychological effects on those populations in support of a Commander’s intent or mission.

The Halifax Rifles (RCAC) is a Primary Reserve armoured reconnaissance regiment of the Canadian Armed Forces. The regiment headquarters is in Halifax, NS.

The Armoured Reconnaissance is the eyes and ears of the advancing friendly forces. Usually deployed 5 - 50 km in front of the main body. Their primary role is to obtain accurate information on the enemy and the ground in all phases of war and pass it back quickly to the higher command. Trained in observation and surveillance, Armoured officers are given the freedom to use their initiative and training to execute this task, normally while leading groups of 3 - 21 people. Armoured Soldiers operate and maintain armoured fighting vehicles, its weapon systems and its communication equipment. Members of armoured reconnaissance units are highly-adaptable decision makers trained to manoeuvre in enemy territory undetected, collecting and reporting information on the enemy.

The role of the armoured reconnaissance unit is to obtain timely and accurate information which both satisfies the commander’s information requirements and is received quickly enough to be incorporated in the commander’s operational planning process.

Members of armoured reconnaissance units are highly-adaptable decision makers trained to manoeuvre in enemy territory undetected, collecting and reporting information on the enemy.