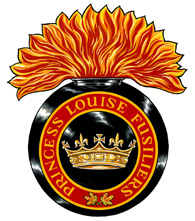 The Princess Louise Fusiliers (PLF) is a Primary Reserve infantry unit of the Canadian Armed Forces. Based out of Halifax, Nova Scotia, this infantry regiment traces its local roots as a Halifax unit of Militia back to June 18, 1749.

The Princess Louise Fusiliers’s main responsibility is as a Light Infantry regiment, including a new mission task of Pioneers. Their task is to augment the Regular Force during Expeditionary Operations as well as Domestic Operations.

Some of the many skills taught and practiced at the unit level include field craft and battle procedures which explore camouflage and concealment, internal security, patrolling, escape and evasion tactics, and also how to safely use explosives and pyrotechnics, communication and navigation systems. Other training involves weapons handling and marksmanship, navigation, Basic Winter Warfare, Basic Mountain Operations and Basic Pioneer operating both by Day and Night.

Based out of Halifax, Nova Scotia, this infantry regiment traces its local roots as a Halifax unit of Militia back to June 18, 1749 when Sir Edward Cornwalis formed a local Militia under his own command. Ten companies were mustered at the Grand Parade in the city and were later formed as a collective battalion.

The regiment was authorized as an officially constituted unit of Canada in1869, following the passage of the 1868 Militia Act. During the unit's history, it has undergone several name changes. On November 5, 1869, the regiment was named the 66th The Halifax Battalion of Infantry. Originally consisting of six companies, it later gained two more.

Ten years later, on November 14, 1879, the regiment was once again renamed, this time to the 66th Battalion 'Princess Louise Fusiliers', named for Princess Louise, daughter of Queen Victoria and wife of the Governor General at the time. It was shortly after this point in which the regiment received its first battle honour, when they helped suppress the Northwest Rebellion of 1885. Soldiers of the unit served in North West Canada with the Halifax Provisional Battalion. Fourteen years later, in 1899, the regiment provided some of its soldiers to a company raised in Nova Scotia for the 2nd (Special Service) Battalion of The Royal Canadian Regiment, which was raised for service in South Africa during the Second Boer War. May 8, 1900 brought about another name change, this time to 66th Regiment 'Princess Louise Fusiliers'.