When flown or displayed in Canada, the Royal Union Flag, commonly known as the “Union Jack,” serves three purposes. First, it is the national flag of the United Kingdom; second, it is flown as a symbol of Canada’s membership in the Commonwealth and allegiance to the Crown; and third, it can be flown as a historical flag, used by Canada as a national flag before the adoption of the current National Flag in 1965.

Although the Canadian Red Ensign was also widely used as an emblem of Canada from the time of Confederation until 1965, it was never formally adopted as the national flag. The Red Ensign currently has no recognized precedence in Canada other than as a historical flag.

The Union Jack maintains its presence in Canada through its incorporation in the provincial flags of Ontario, Manitoba and British Columbia.

The order of precedence of the Union Jack, in relation to provincial and territorial flags, varies in accordance with the reason it is flown.

When representing the United Kingdom as a sovereign nation, the Union Jack takes precedence over a Canadian provincial or territorial flag, as established in the order of precedence for flags.

When representing Canada's membership in the Commonwealth or allegiance to the Crown, for example during a royal visit, Canadian provincial and territorial flags take precedence over the Union Jack.

When physical arrangements allow,Footnote 1 the Union Jack will be flown along with the National Flag of Canada at federal buildings, airports, military bases and other appropriate establishments within Canada, from sunrise to sunset, on the following occasions annually:

The Union Jack may be flown with the National Flag of Canada at the National War Memorial and at similarly appropriate federal locations in Canada and abroad in connection with ceremonies marking anniversaries of events in which the Canadian Armed Forces participated with other Commonwealth forces.

Precedence – When displayed as a historical flag

The United Nations (UN) Flag is flown with the National Flag of Canada on Parliament Hill in Ottawa on United Nations Day, October 24, and by special arrangement on other occasions, including visits to Ottawa by the Secretary General of the United Nations or his/her representative. 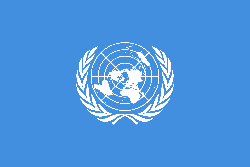 The North Atlantic Treaty Organization (NATO) is Canada's first peacetime military alliance, placing the nation in a defensive military alliance with the United States, the nations of Western Europe, and Turkey. The treaty was signed on April 4, 1949. The NATO Flag is not flown on any specific day. 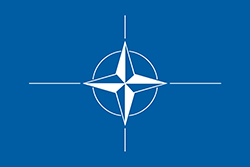 “Physical arrangements” means the existence of at least two flagpoles. The National Flag will always take precedence over and will not be replaced by the Union Jack.