The history of the National Flag of Canada

You’ve seen it proudly flying throughout the country. Maybe you’ve waved a paper hand flag on Canada Day, or worn it as a pin on your jacket. Maybe you’ve even sewn one on to your backpack and travelled the world! Regardless of where you see it, the National Flag of Canada stands out both at home and abroad as one of the most striking and recognizable symbols representing Canada.

But has Canada always had its iconic red and white maple leaf flag to showcase itself to the world? It may surprise you to learn that our flag is relatively young and that it has an eventful history.

While the quest for a national flag for Canada dates back to the late 19th and early 20th centuries, the flag as we know it today emerged from the major social transformations during the 1950s and 1960s in the lead up to the 100th anniversary of Confederation in 1967.

Read more about flying the National Flag of Canada.

Several different flags were used in Canada before our current National Flag. Since the first days of the European presence on Canadian soil, the flags (PDF download, 1.96 MB) of the European homelands, such as France, were displayed. The flags of British North America used in colonial Canada showcased ties to the British Empire. Both before and after Confederation in 1867, Canada used the United Kingdom’s Royal Union Flag, commonly known as the Union Jack.

Another British flag used in Canada was the Red Ensign. While it was officially a naval flag used by Canadian ships starting in the 1890s, the Canadian Red Ensign — a combination of the Union Jack and the shield of Canada — had been used unofficially both at sea and on land since the 1870s and was widely recognized as a national symbol. There were many versions of the flag that included additional elements such as wreaths of maple leaves, crowns, and beavers. The shield itself was modified to include the arms of the provinces as they joined Confederation. During the First World War, the Canadian Red Ensign became a popular patriotic emblem.

As Canada matured as a nation, it became more important to create uniquely Canadian symbols to represent the country. In 1921, King George V granted Royal Arms to Canada and the shield of Canada’s new official coat of arms took its place on the Canadian Red Ensign. It is this version of the Canadian Red Ensign that represented Canada during the Second World War.

The search for the right flag

Canadian troops were sent to Egypt in 1956 as United Nations Peacekeepers during the Suez Crisis, which saw an invasion of Egypt by Israel, France and the United Kingdom. The Canadian troops flew the Canadian Red Ensign, which incorporates the Union Jack. To Egyptian observers, it appeared that Canada was flying the flag of an invading nation! This misunderstanding helped to reinforce the call for a distinctive and unique Canadian national flag.

Beyond a new coat of arms, many Canadians also wanted a new, distinctive Canadian flag to represent them. Appeals for such a flag increased steadily in the early 20th century. But creating an entirely new flag was no easy feat. Which symbols could be chosen to represent and characterize Canada and its values?

In 1925 and again in 1946, attempts were made to consider possible designs for a national flag. However, on both occasions the projects were shelved by Prime Minister William Lyon Mackenzie King, mainly due to fears that the issue might lead to political instability. As a compromise, the Canadian government chose to keep the Union Jack as the national flag and to fly the Canadian Red Ensign from government buildings.

In the years following the Second World War, public opinion grew in favour of a new national flag, but the nation was divided. Canadians had fought and died under the Union Jack and the Canadian Red Ensign and many were still attached to these emblems and to their British heritage.

In 1960, Lester B. Pearson, then Leader of the Opposition, declared that he was determined to solve what he called “the flag problem.” To Pearson, this issue was critical to defining Canada as a unified, independent country. As the newly elected Prime Minister in 1963, Pearson promised to resolve the question of a new national flag in time for Canada’s centennial celebrations in 1967.

Pearson began by proposing a flag design featuring a sprig of 3 red maple leaves, similar to those in the national coat of arms, on a white background bordered by 2 blue stripes. This design, created by the heraldic expert Alan Beddoe, became known as the “Pearson Pennant.”

Pearson recommended this design to members of Parliament in 1964, but his proposal was strongly opposed. Instead, a parliamentary committee was created and given a 6-week deadline to submit a recommendation for a national flag. Debate within the committee was fierce, divided between those who wished to retain the symbols that tied Canada to its colonial history, and those who wanted Canada to adopt its own symbols for the future. This period was known as the Great Flag Debate.

One of the more well-received designs considered by the committee was proposed by George Stanley, Dean of Arts at the Royal Military College (RMC) in Kingston, Ontario. Inspired by RMC’s own flag, Stanley recommended a design featuring a single, stylized red maple leaf on a white background with 2 red borders.

The flag of the Royal Military College, which inspired George Stanley’s flag design, was itself inspired by the red and white stripes of the Canada General Service Medal (1866-1870). 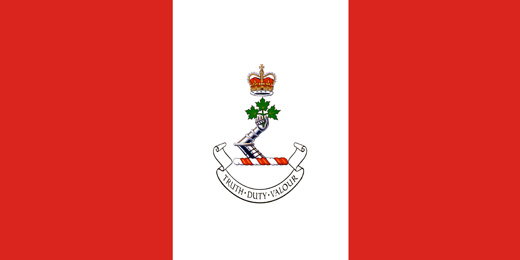 George Stanley’s original flag design, as rendered by heraldic artist Alan Beddoe, incorporated a stylized maple leaf with 13 points. While Stanley’s design was selected to become Canada’s new National Flag, the maple leaf had to be changed, because the 13-point maple leaf lost its detail when seen from far. The leaf was redesigned with 11 points by graphic artist Jacques St-Cyr. This adapted design is now found on Canada’s National Flag.

John Matheson took the time to write to George Stanley in the early hours of December 15, 1964, to inform him that his design had just been selected as the new National Flag of Canada.

This poster illustrates some of the different ideas that were proposed over the years as a national flag for Canada.

On October 22, 1964, the committee voted in favour of Stanley’s single-leaf design. Two months later the House of Commons approved, followed shortly after by the Senate. The persuasive leadership of John Matheson, M.P., one of the flag committee’s pre-eminent members, is often credited with achieving consensus within the committee and helping to end the Great Flag Debate in Parliament.

1965: A new national symbol is raised

The new maple leaf flag was made official by a proclamation from Queen Elizabeth II on January 28, 1965. On February 15 of that year, it was inaugurated in a public ceremony on Parliament Hill. Thousands of Canadians gathered as the Canadian Red Ensign was lowered and, at the stroke of noon, the new National Flag of Canada was hoisted. Prime Minister Pearson’s words on the occasion resound with hope and determination: “May the land over which this new flag flies remain united in freedom and justice … sensitive, tolerant and compassionate towards all.”

In the words of John Matheson, the new flag “was the handiwork of many loving hands, extended over a long period of Canada’s history.” This collaborative effort created an elegant new emblem, instantly recognizable as the foremost symbol of Canada, its values, and the millions of citizens who make up the Canadian family.

See the section on the birth of Canada’s National Flag to find out more about the many people involved in the creation of the flag.

On February 15, 1965, Canada's new flag was raised for the first time on Parliament Hill in Ottawa. The National Film Board of Canada was there to record this historic event.

Flags are heraldic emblems. The Canadian Heraldic Authority, created in 1988, is the government body responsible for administering official heraldry in Canada. The blazon, or heraldic description for the National Flag of Canada is Gules on a Canadian pale Argent a maple leaf Gules.

Why the maple leaf?

While the design of the flag was new, it featured a familiar symbol that had a long history of use in Canada. The maple leaf emerged in the 19th century as a symbol of Canadian identity and was everywhere in popular culture: books, songs, coins, badges, banners, and many other items. Generations of Canadians had already adopted the maple leaf as a symbol of their identity, but it is during the First World War — where it was used as the cap badge worn by members of the Canadian Expeditionary Force — that it became the most widely recognized emblem of the nation. Most poignantly, it is a single maple leaf that is carved upon many of the headstones of Canadian service men and women who gave their lives in the 2 world wars. For many, the maple leaf was a shared symbol of pride, courage and loyalty. 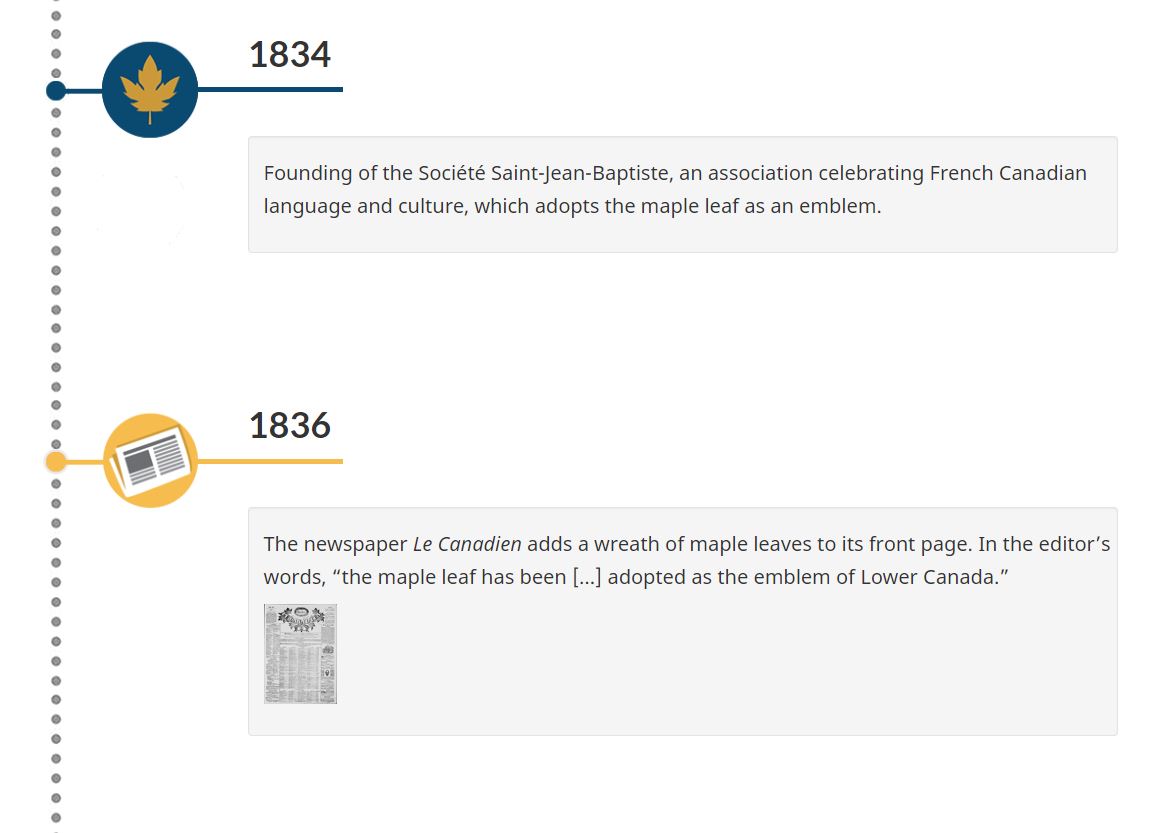 Timeline: The Maple Leaf shows the evolution of this national symbol.