People are at the core of Canada’s new vision for Defence. Ensuring that our women and men in uniform are prepared and equipped to succeed on operations, and that they are fully supported from recruitment through retirement and beyond, is fundamental to our success.

When they put on the uniform, members of the Canadian Armed Forces take on an unlimited liability. Because of the sacrifices that they make day in and day out, Canada remains among the safest and most secure countries in the world.

However, the international landscape is shifting under tremendous pressures, and the current security environment presents a variety of threats, many that transcend national borders. Increasingly, instability abroad can have direct manifestation in Canada.

In recognition of this dynamic, Canada’s defence policy presents a new strategic vision for defence: Strong, Secure, Engaged. This is a vision in which Canada is:

Canada must have a responsive and capable military. As an instrument of national power, the military is an important and unique capability that the Government of Canada can use to advance national interests, promote Canadian values, and demonstrate leadership in the world. 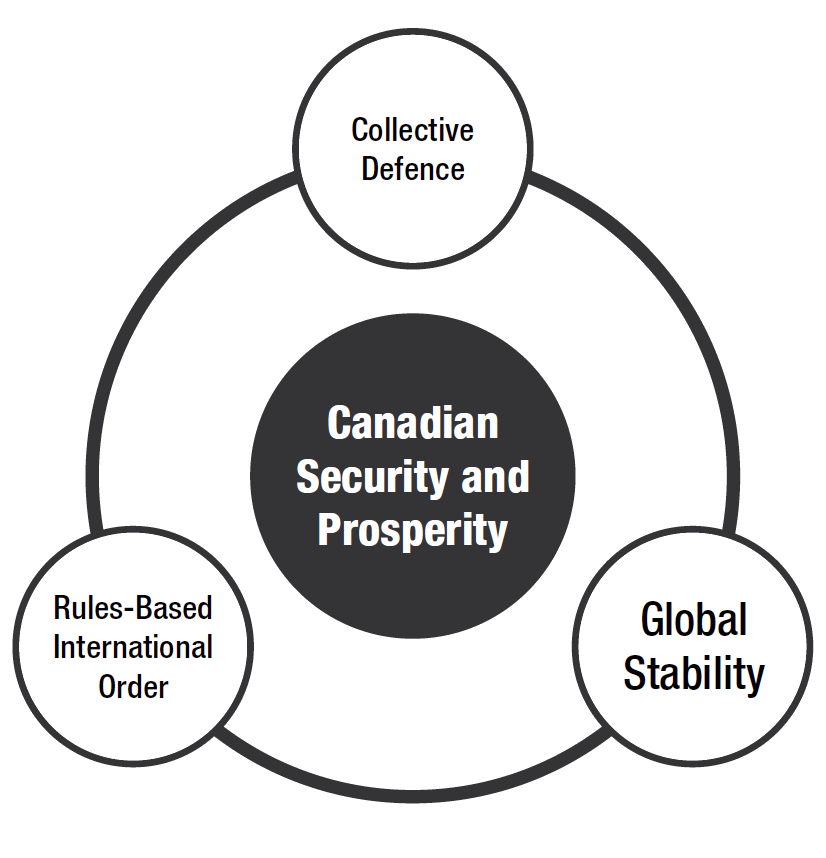 Above all else, Canadian security and prosperity remain Canada’s primary strategic interests. These interests support the Canadian way of life and are critical to ensuring that Canadians can flourish and go about their daily lives without fear.

Importantly, other factors, including global stability, the primacy of the rules-based international order, and the principle of collective defence underpin Canadian security and prosperity.

Canada must therefore also promote and protect these interests to ensure that Canada can remain secure, continue to prosper, and exert positive influence on the international stage.

Most often, Canada’s military action will be applied as part of a coherent, coordinated, whole-of-government effort in concert with diplomatic engagement, humanitarian and development aid, and other measures. At other times, the military may be uniquely called upon to act in Canada’s interests. In all cases, Canadian Armed Forces activities will comply with domestic and international law. 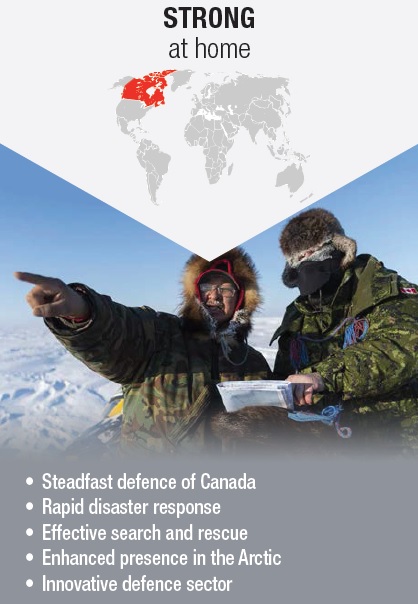 The Forces will maintain an effective deterrent and prevent conventional military threats from reaching our shores. We will ensure that new challenges in the space and cyber domains do not threaten Canadian defence and security objectives and strategic interests, including the economy.

As described above, we will also maintain a robust capacity to respond to a range of domestic emergencies, including by providing military support to civilian organizations on national security and law enforcement matters when called upon, engaging in rapid disaster response, and contributing to effective search and rescue operations.

We will have improved mobility and reach in Canada’s northernmost territories, and pursue a greater presence in the Arctic over the longer-term.

Being strong at home is also about leveraging the strengths of all Canadians. Canada has a world-leading, highly innovative high-technology defence sector that can contribute significantly to Canada’s defence and security. We will work in closer partnership with Canadian companies and universities to ensure the Canadian Armed Forces has the advanced capabilities it requires to meet emerging challenges. This closer partnership will also benefit the Canadian economy in the form of high-value jobs and greater export opportunities for Canadian companies.

Canadians can be confident that the Canadian Armed Forces will remain ready to act in the service of Canadians – from coast to coast to coast – and sustain a continuous watch over Canada’s land mass and air and sea approaches, an area of more than 10 million square kilometers, ensuring timely and effective response to crises. 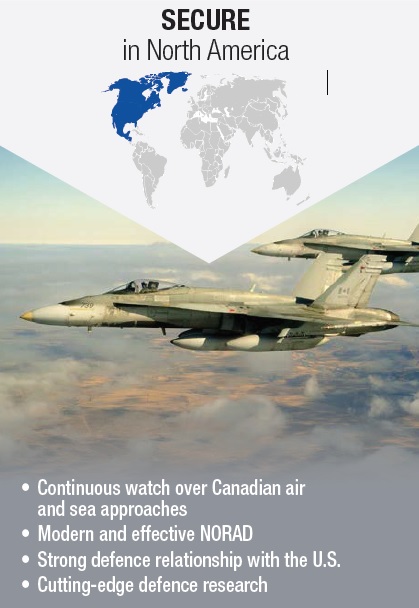 Canada takes its responsibility to defend against threats to the continent seriously. The Defence team will expand Canada’s capacity to meet NORAD commitments by improving aerospace and maritime domain awareness and response and enhancing satellite communications. Canada will also procure an advanced fighter capability and will remain highly interoperable with our American allies.

Canada will work closely with the United States to ensure NORAD is fully prepared to confront rapidly evolving threats, including by exploring new roles for the command, taking into account the full range of threats. 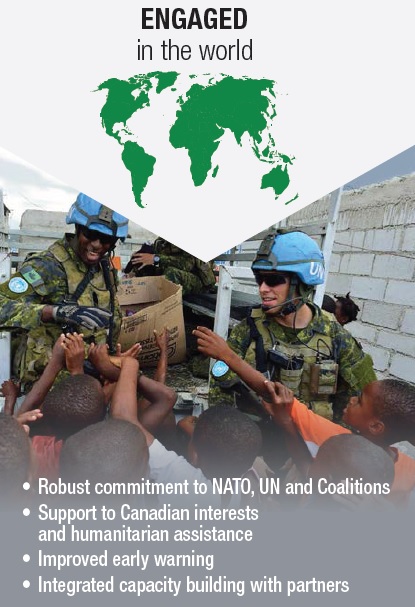 ENGAGED in the World

Canada cannot be strong at home without being engaged in the world.

As a G7 country and founding member of NATO, Canada has a strong interest in global stability and open trade, and we will continue to do our part on the international stage to protect our interests and support our allies. Canada’s engagement in the world is also guided by values of inclusion, compassion, accountable governance, and respect for diversity and human rights.

As a result of this policy, the Canadian Armed Forces will be prepared and equipped to advance Canadian international security objectives – from conducting expeditionary operations to engaging in capacity building with partners – and to support our allies where our shared interests are at stake.

Canada will pursue leadership roles and will prioritize interoperability in its planning and capability development to ensure seamless cooperation with allies and partners, particularly NATO.

The Canadian Armed Forces will be prepared to make concrete contributions to Canada’s role as a responsible international actor, particularly through participation in United Nations peace operations. We will be able to support conflict prevention, mediation, and post-conflict reconstruction, with an emphasis on human rights and, in particular, gender equality.

We will maintain the capacity to provide protection and relief to the world’s most vulnerable populations, creating the stability necessary for development and sustainable peace to take root. We will also foster world-class expertise for building the capacity and resiliency of others, and delivering tangible results in those areas.

Canadian international engagement will be guided by the core Canadian values of inclusion, compassion, accountable governance, and respect for diversity and human rights.

The goal of gender equality permeates all of these core values. These values are consistent with the Canadian Charter of Rights and Freedoms and international law.

The Canadian military is guided in all of its actions by these values, from the treatment of its personnel to the conduct of operations abroad.

The Canadian Armed Forces may be employed to protect these values when threatened and to promote them through their actions, including by training partners and capacity building.