Learn about patterns of household food insecurity in Canada over time and how they’re gathered.

Measures of household food insecurity have been included on national health surveys since the mid-1990s. They help us develop and assess the impact of policies and programs related to food security. However, the use of different indicators and measurement inconsistencies have hindered the ability to track changes over time.

To help address this, Health Canada commissioned a Discussion Paper on Household and Individual Food Insecurity in 2001. It helped to explore issues related to the inclusion of indicators of food insecurity in a monitoring system. The Household Food Security Survey Module (HFSSM) built on this discussion paper.

Therefore, the prevalence of estimates of food insecurity from the CCHS 2004 should not be included in trend analysis.

In the listed cycles for optional modules, the questions related to household food insecurity were asked only of respondents in provinces and territories which opted to include the HFSSM.

Trends in household food insecurity are difficult to detect with data from only 2 or 3 points in time. However, on a national level, rates of food insecurity from 2011 to 2012 are not significantly different from 2007 to 2008.

The HFSSM will be core content again in 2017 to 2018. However, as a result of the changes from the 2015 CCHS redesign , combining cycles of CCHS data from before and after the redesign is not recommended, and caution should be taken when comparing estimates across those years. 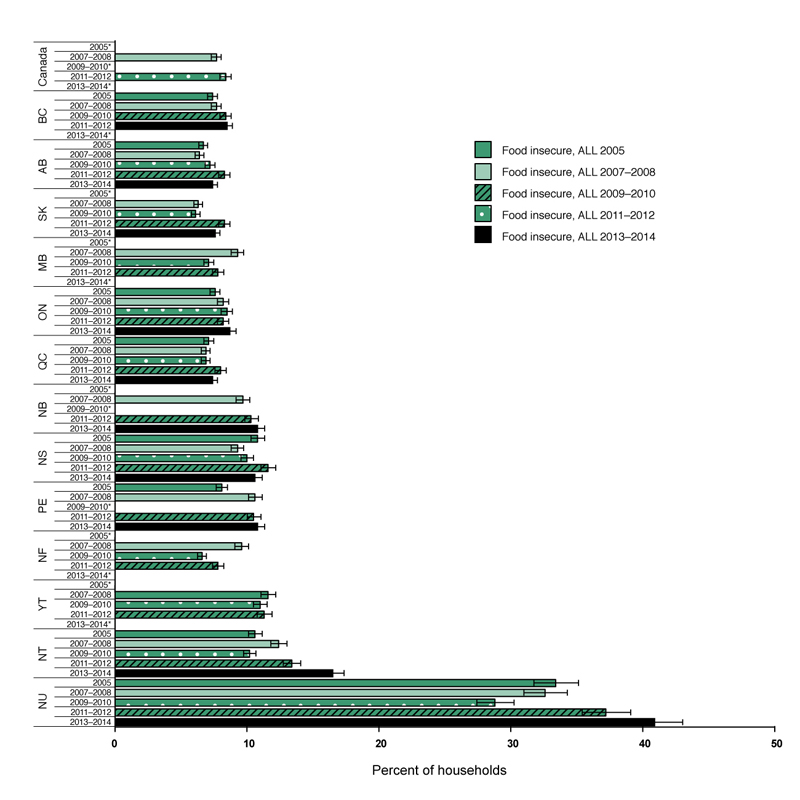 *National estimate not available. The HFSSM was optional content and wasn’t collected in all provinces and territories.

Ensure that the Health Canada Copyright Guidelines are adhered to when using data and graphs from this web page.