Alcohol is a mood-altering substance used by 80% of Canadians. People consume it in drinks such as beer, wine, spirits and cider. Although it is legal, alcohol does have some health and safety risks.

Alcohol (also known as booze and other nicknames) is the common name for ethanol or ethyl alcohol. Pure ethanol is a clear, colourless liquid combined with other ingredients to make alcoholic beverages, such as beer, wine and spirits.

How alcohol is made

Beer, wine and cider are made through a fermentation process. Fermentation is a natural biological process in which yeast changes sugar into alcohol. It makes drinks with lower alcohol concentration (4% to 15%).

Spirits, such as gin, rum, vodka, and whiskey, are made through distillation. This is an industrial process that makes drinks with higher alcohol concentrations (40% or more).

Alcohol for other purposes

There are two other main types of alcohol, both of which are unsafe to drink:

Alcohol activates the pleasure or reward centres in the brain. It can produce a sense of wellbeing, relaxation, disinhibition, and euphoria.

Alcohol is also a central nervous system depressant. It depresses and slows down brain functions and thought processes. It can also affect other bodily functions such as breathing and heart rate.

Alcohol has the same effect no matter which alcoholic beverage you drink. Exactly how it affects you depends on factors such as:

Alcohol absorbs into your bloodstream through your mouth, stomach and intestines. Most of your organs and tissues are exposed to the same amount of alcohol as your blood, but your liver is exposed to more.

Alcohol continues to circulate through your body until your liver eliminates it. Some alcohol (10%) exits your body through urine, sweat and breathing.

A standard drink is a measure of how much pure alcohol you are drinking. It varies based on the concentration of alcohol in a beverage. 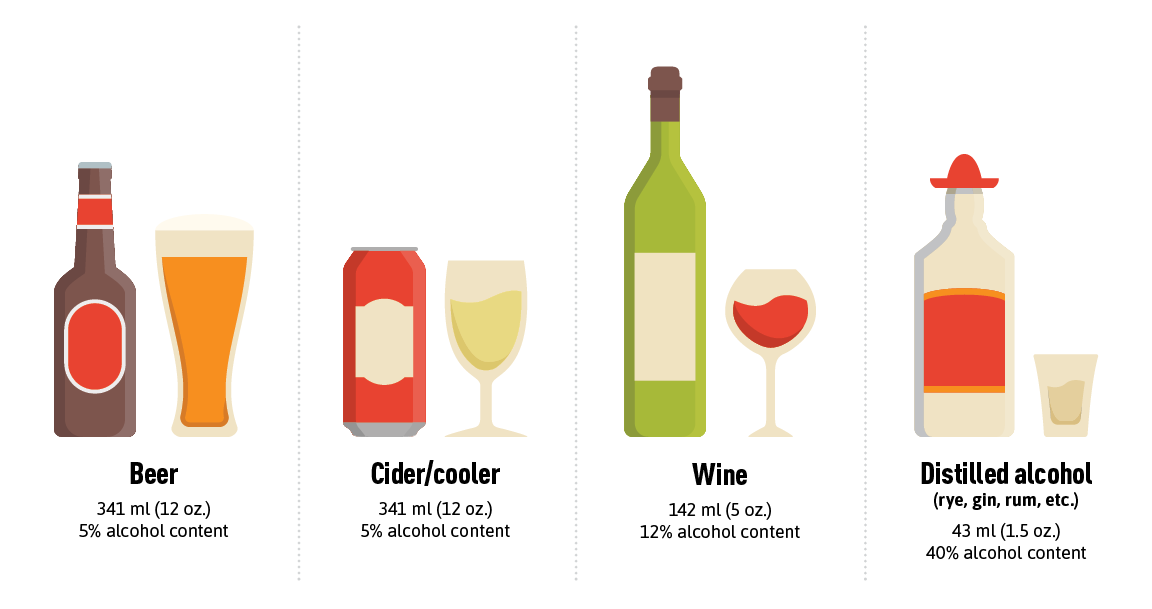 In Canada, a standard drink is 17 millilitres or 13.45 grams of pure alcohol. This is the equivalent of:

Canada's Low-Risk Alcohol Drinking Guidelines can help you make informed decisions about drinking. The guidelines recommend setting limits to help you avoid the chronic and acute health risks of alcohol use.

The guidelines for consumption limits 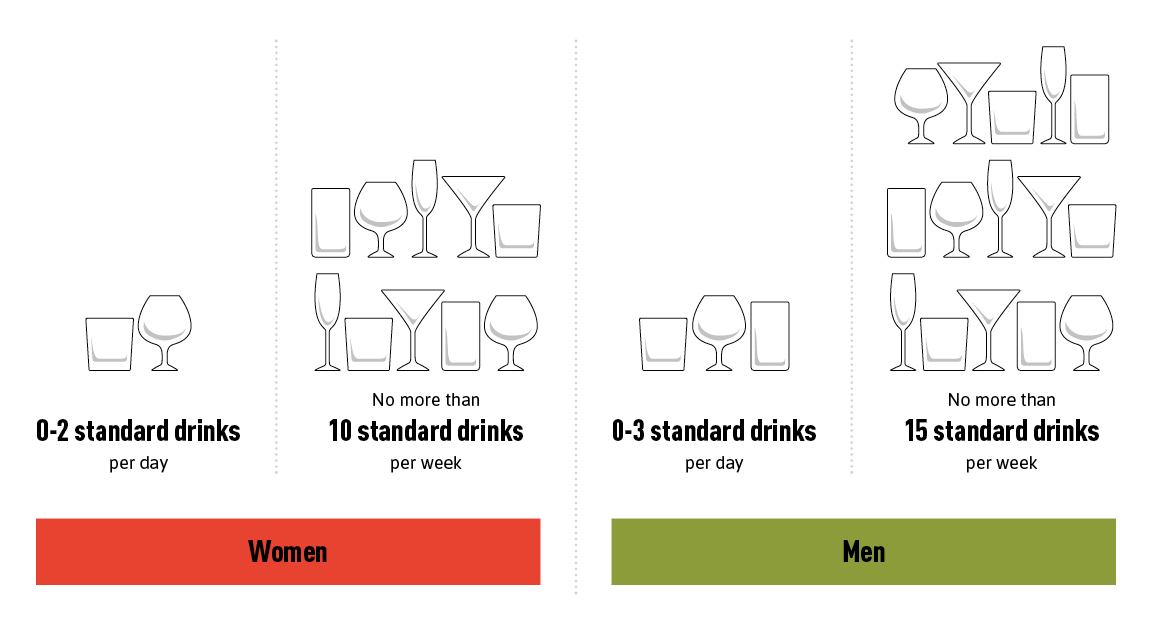 Chronic risk refers to the harms that happen over the long-term.

To avoid the toxic effects of drinking, you can limit the amount of drinks you have per day and each week.

Acute risks refer to the health consequences of drinking too much alcohol over the short-term or on a single occasion (often referred to as binge drinking or heavy drinking).

If you drink too much alcohol on a single occasion (often referred to as binge drinking), you may experience these short-term effects:

Severe alcohol intoxication can lead to alcohol poisoning, which can result in:

Alcohol can also alter the effects of other drugs and substances. Combining alcohol with another drug that depresses the central nervous system can increase the depressant effect on the body. In some cases, the combination is dangerous and potentially fatal.

If you frequently drink too much alcohol, you risk some of these long-term effects:

Alcohol use in pregnancy

Drinking alcohol during pregnancy can seriously harm an unborn baby. Fetal Alcohol Spectrum Disorder (FASD) is a brain injury that can occur when an unborn baby is exposed to alcohol. It's a lifelong disorder with effects that include physical, mental, behavioural and learning disabilities. These can vary from mild to severe.

FASD is the leading known cause of preventable developmental disability in Canada. The number of people who have FASD is not known in Canada nor anywhere else in the world. This is because FASD is difficult to diagnose and also because it often goes undetected.

However, based on studies conducted between 1985 and 1997, an estimated 1% of Canadians (360,000 people) have FASD. More recent studies from the US and other Western European countries of first grade students estimate that between 2 to 5% have FASD. If you're planning a pregnancy, the best thing to do is to stop drinking alcohol in advance of your pregnancy. If you aren't planning a pregnancy, you can help prevent FASD by properly using:

For more information on FASD please refer to:

People who drink too much may develop a medical condition called alcohol use disorder (AUD). Like other substance use disorders, AUD is a mental health disorder. Diagnosis is made by the presence of specific symptoms or criteria. The severity of the condition (mild, moderate, or severe) depends on how many symptoms you have.

For more information on where to get help for problematic alcohol use, please visit the problematic substance resource page.

Trends in alcohol use among Canadians

National surveys have gathered data about the levels of alcohol use among Canadians of various ages. To learn more, visit our Public Health Infobase page.