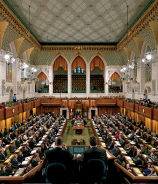 Under legislation passed by Parliament, federal elections must be held on the third Monday in October every four years following the most recent general election. The Prime Minister may ask the Governor General to call an earlier election.

Canadian citizens who are 18 years old or older may run in a federal election. The people who run for office are called candidates. There can be many candidates in an electoral district.

One of the privileges of Canadian citizenship is the right to vote. You are eligible to vote in a federal election or cast a ballot in a federal referendum if you are:

Once an election has been called, Elections Canada mails a voter information card to each elector whose name is in the National Register of Electors. The card lists when and where you vote and the number to call if you require an interpreter or other special services.

Even if you choose not to be listed in the National Register of Electors or do not receive a voter information card, you can still be added to the voters’ list at any time, including on election day.

To vote either on election day or at advance polls, go to the polling station listed on your voter information card. (See voting procedures)

House of Commons in session

Canadian law secures the right to a secret ballot. This means that no one can watch you vote and no one should look at how you voted. You may choose to discuss how you voted with others, but no one, including family members, your employer or union representative, has the right to insist that you tell them how you voted. Immediately after the polling stations close, election officers count the ballots and the results are announced on radio and television, and in the newspapers.

The Prime Minister and the party in power run the government as long as they have the support or confidence of the majority of the MPs. When the House of Commons votes on a major issue such as the budget, this is considered a matter of confidence. If a majority of the members of the House of Commons vote against a major government decision, the party in power is defeated, which usually results in the Prime Minister asking the Governor General, on behalf of the Sovereign, to call an election.

The Prime Minister chooses the ministers of the Crown, most of them from among members of the House of Commons. Cabinet ministers are responsible for running the federal government departments. The Prime Minister and the Cabinet ministers are called the Cabinet and they make important decisions about how the country is governed. They prepare the budget and propose most new laws. Their decisions can be questioned by all members of the House of Commons.

Voting Procedures During an Election Period

Electors whose information is in the National Register of Electors will receive a voter information card. This confirms that your name is on the voters’ list and states when and where you vote

If you do not receive a voter information card, call your local elections office to ensure that you are on the voters’ list. If you do not have the number, call Elections Canada, in Ottawa, at 1-800-463-6868.

If you cannot or do not wish to vote on election day, you can vote at the advance polls or by special ballot. The dates and location are on your voter information card.

Mark an “X” in the circle next to the name of the candidate of your choice.

Your vote is secret. You will be invited to go behind the screen to mark your ballot. Once marked, fold it and present it to the poll officials.

The poll official will tear off the ballot number and give your ballot back to you to deposit in the ballot box.

When the polls close, every ballot is counted and the results are made public. You can see the results on television or on the Elections Canada website (www.elections.ca).

Other Levels of Government in Canada

Local or municipal government plays an important role in the lives of our citizens. Municipal governments usually have a council that passes laws called “by-laws” that affect only the local community. The council usually includes a mayor (or a reeve) and councillors or aldermen. Municipalities are normally responsible for urban or regional planning, streets and roads, sanitation (such as garbage removal), snow removal, firefighting, ambulance and other emergency services, recreation facilities, public transit and some local health and social services. Most major urban centres have municipal police forces.

The First Nations have band chiefs and councillors who have major responsibilities on First Nations reserves, including housing, schools and other services. There are a number of provincial, regional and national Aboriginal organizations that are a voice for First Nations, Métis and Inuit people in their relationships with the federal, provincial and territorial governments.

How Much Do You Know About Your Government?

Use these pages to take notes and to study important information.

The name of the representative of the Queen of Canada, the Governor General, is…

The Head of Government, the Prime Minister, is…

The name of the political party in power is…

The name of the Leader of the Opposition is…

The names of the other opposition parties and leaders are…

My Member of Parliament (MP) in Ottawa is…

My federal electoral district is called…

The representative of the Queen in my province, the Lieutenant Governor, is…

The Head of Government (the Premier) is…

The name of the provincial party in power is…

The names of the provincial opposition parties and leaders are…

My provincial representative is…

The name of the Commissioner, who represents the federal government in my territory, is…

The name of the Premier is…

The name of my territorial representative is…

The name of the municipality where I live is…